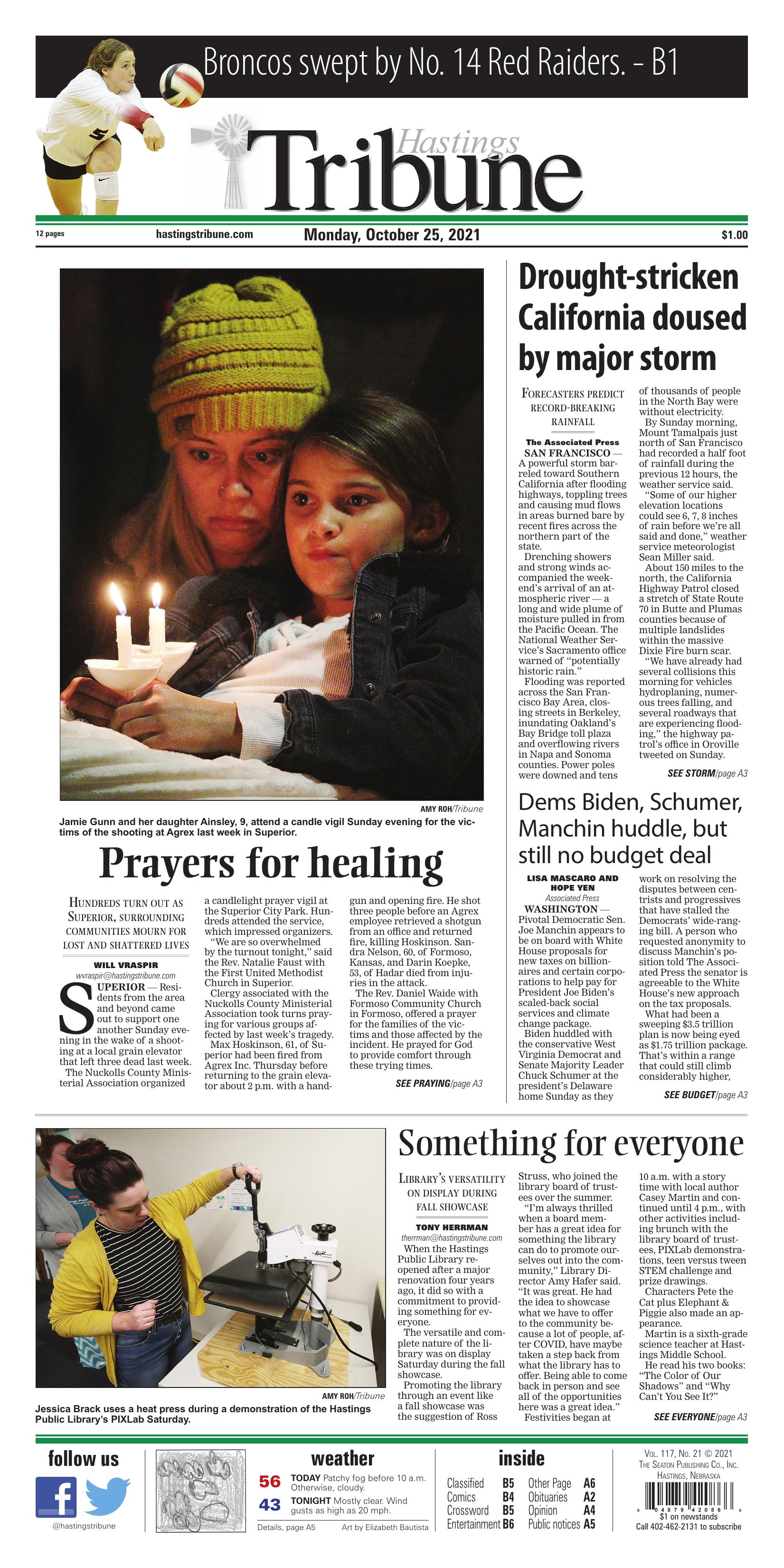 Jamie Gunn and her daughter Ainsley, 9, attend a candle vigil Sunday evening for the victims of the shooting at Agrex last week in Superior.

SUPERIOR — Residents from the area and beyond came out to support one another Sunday evening in the wake of a shooting at a local grain elevator that left three dead last week. 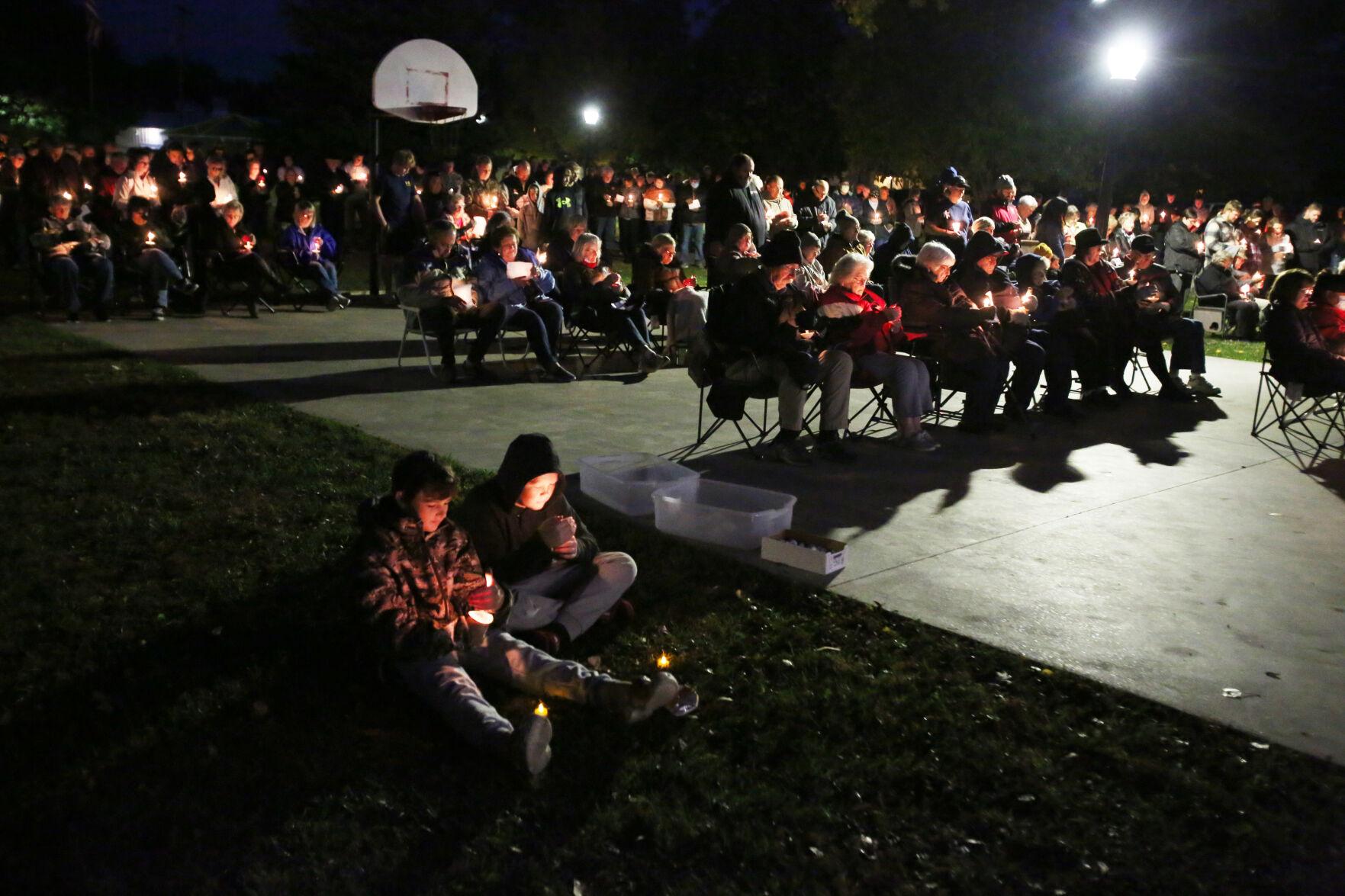 Kamden Boyles (left) and Justice Sander attend a candle vigil Sunday evening for the victims of the shooting at Agrex last week in Superior.

“We are so overwhelmed by the turnout tonight,” said the Rev. Natalie Faust with the First United Methodist Church in Superior. 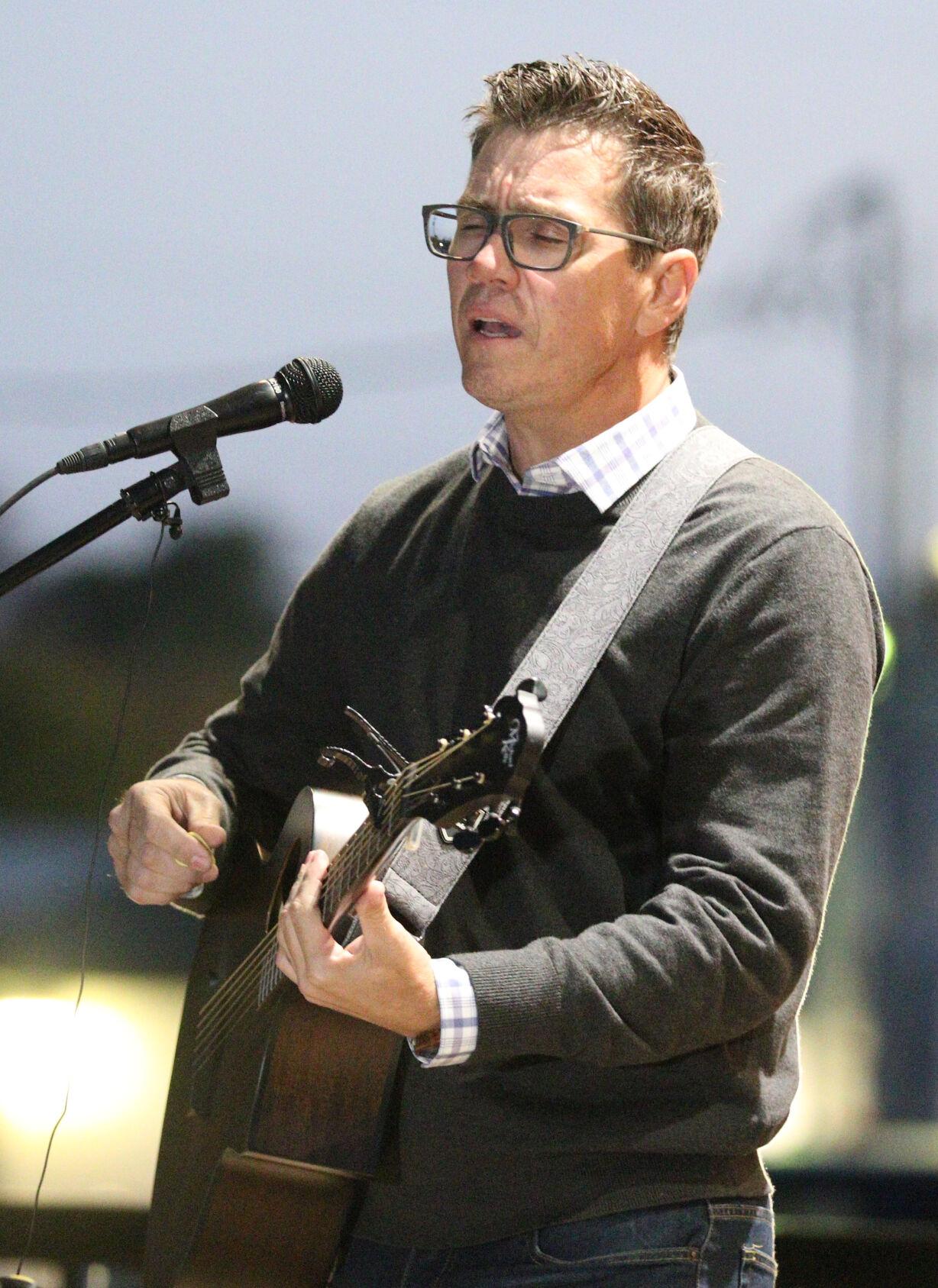 Mike Sander, pastor at Superior Church of Christ, sings Amazing Grace during a candle vigil Sunday evening for the victims of the shooting at Agrex last week in Superior.

Max Hoskinson, 61, of Superior had been fired from Agrex Inc. Thursday before returning to the grain elevator about 2 p.m. with a handgun and opening fire. He shot three people before an Agrex employee retrieved a shotgun from an office and returned fire, killing Hoskinson. Sandra Nelson, 60, of Formoso, Kansas, and Darin Koepke, 53, of Hadar died from injuries in the attack.

The Rev. Daniel Waide with Formoso Community Church in Formoso, offered a prayer for the families of the victims and those affected by the incident. He prayed for God to provide comfort through these trying times.

He encouraged people to turn toward God to provide comfort through the Holy Spirit.

“We ask for comfort for the families of the victims,” he said. “You are the God who heals.” 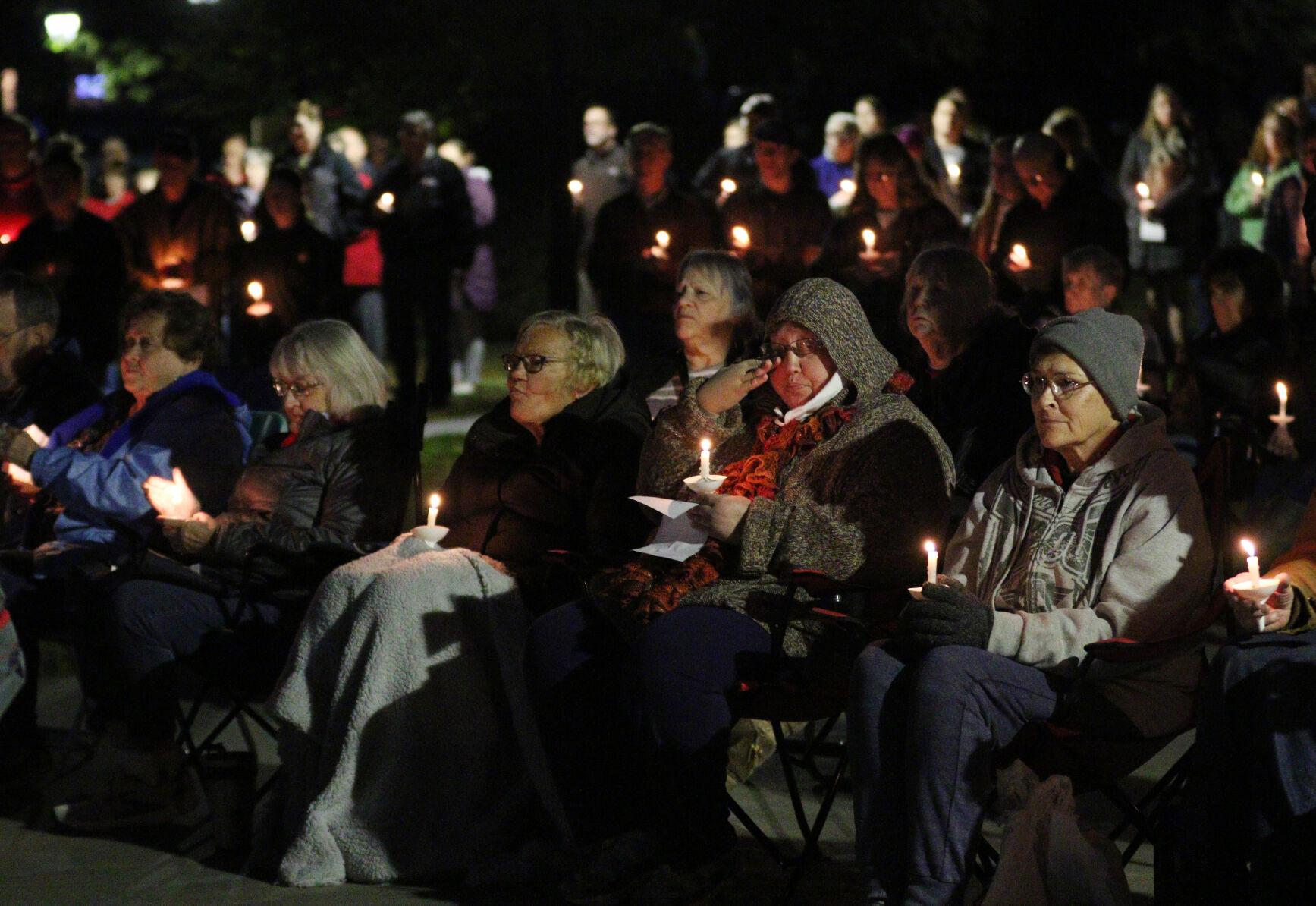 People attend a candle vigil Sunday evening for the victims of the shooting at Agrex last week in Superior.

The Rev. Matt Ehlers with Olive Hill Church in rural Jewell County, Kansas, prayed for the agriculture community, which includes much of the economy of the area.

He said the fact that the community came together for the vigil shows the heart of the residents and their willingness to support each other.

“Let us continue to be the disciples You taught us to be.”

The Rev. Ethan Feistner with Salem Lutheran Church (ELCA) between Superior and Nelson prayed for Hoskinson’s family, reminding the audience of the loss his family is suffering, as well.

“We pray You be with Max’s family in the midst of things they are trying to understand,” he said. “May the Holy Spirit lead us as a community to come to the aid of one another.”

The Rev. Jon Albrecht with Living Faith Fellowship Church in Superior prayed for the Agrex family, which is feeling the loss from locations across several states.

He said that he was among the residents in a state of shock following the news on Thursday. He said he was encouraged to see messages saying “Together we are better” in the aftermath of the tragedy and pointed to his faith as a guiding light in the darkness.

“It’s hard enough to do this for those of us who know Jesus,” he said. “It’s next to impossible to go through something like this and not know Jesus.”

The Rev. Lori Kitzing of First Presbyterian Church in Superior and Bethany Lutheran Church in Ruskin prayed for the first responders as well as the doctors and nurses who cared for those who were injured, especially considering the likelihood of them knowing each other from the community.

“Keep our first responders safe from harm,” she said. “Help us support them in the important work they do.”

The Rev. Robert Hopkins of Centennial Lutheran Church in Superior prayed for the community struggling to make sense of the tragic loss of life.

“It’s hard to imagine the magnitude of grief this community is going through,” he said.

The Rev. David Johnson with Grace Community Evangelical Free Church in Superior encouraged people to remember that everyone has been affected by the shooting.

“It’s our prayer that we would not take this hurt and lash out at others,” he said. “We pray we have tender hearts toward one another.”

The Rev. Jeff Kimberly of Lighthouse Community Church of the Nazarene in Superior said he drove the school bus to Hastings as Superior faced St. Cecilia in a football game on Friday. He was encouraged by a moment of silence held for Superior during the game and the kind words offered, showing the tragedy affected more than just Superior.

“As people from Hastings filed by the bus, there was an outpouring of people saying, ‘We’re praying for you,’ ” he said.

Pastor Mike Sander with Superior Church of Christ asked the audience to look forward to finding ways to help one another heal through the grief.

“The truth is, the next step is the most important one,” he said. “It’s something we’ve got to do. We’ve got to go out of our way to love one another.” 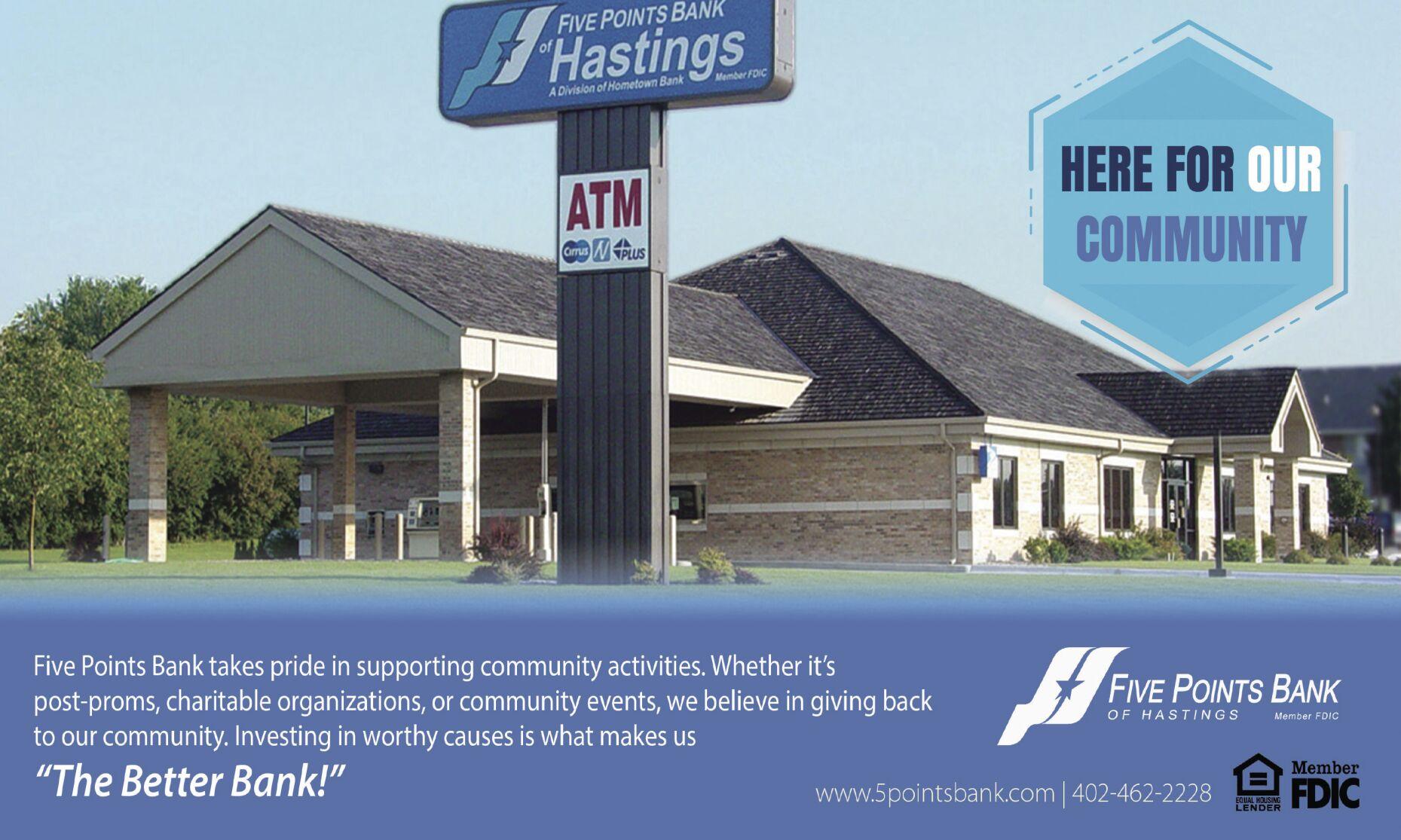 Jessica Brack uses a heat press during a demonstration of the Hastings Public Library’s PIXLab Saturday.

When the Hastings Public Library reopened after a major renovation four years ago, it did so with a commitment to providing something for everyone.

The versatile and complete nature of the library was on display Saturday during the fall showcase.

Promoting the library through an event like a fall showcase was the suggestion of Ross Struss, who joined the library board of trustees over the summer.

“I’m always thrilled when a board member has a great idea for something the library can do to promote ourselves out into the community,” Library Director Amy Hafer said. “It was great. He had the idea to showcase what we have to offer to the community because a lot of people, after COVID, have maybe taken a step back from what the library has to offer. Being able to come back in person and see all of the opportunities here was a great idea.”

Festivities began at 10 a.m. with a story time with local author Casey Martin and continued until 4 p.m., with other activities including brunch with the library board of trustees, PIXLab demonstrations, teen versus tween STEM challenge and prize drawings.

Characters Pete the Cat plus Elephant & Piggie also made an appearance.

Martin is a sixth-grade science teacher at Hastings Middle School.

He read his two books: “The Color of Our Shadows” and “Why Can’t You See It?”

“I was really excited about doing this one here in the library as far as the fall showcase,” he said.

All of his books deal with diversity and individuality.

After reading “The Color of Our Shadows,” Martin led his young audience in painting fall pictures with watercolors.

“That’s what we try to get the kids to recognize — their own individual beauty, style and grace.”

After reading “Why Can’t You See It?” he led audience members in making bracelets.

Martin liked being part of the fall showcase.

“This is great for the community of Hastings, for both kids and families to have a place to come and enjoy books, but all the variety of things they have here,” he said. “Since they’ve redone it’s just an amazing place to be and go and spend time with your family and not feel like it’s just books. There’s so many other things going on.”

He has a third book coming out in January 2022. The story is set in Malta, where Martin’s family lived previously.

His family moved to Hastings for his wife Jamie’s job in the teacher education program at Hastings College after living abroad.

Kennedy Kegley, 8, of Hastings was in attendance for Martin’s reading. Kennedy helped Martin read “Why Can’t You See It?”

“It was nice. I really liked it,” she said. “I liked the colors and stuff.”

Hafer said library staff members did a great job putting together a day of activities with something for everyone.

Struss said public outreach is big for the library.

“Like Amy said, going back to before COVID there’s a certain assumption people know what you do here,” Struss said. “Then there was this long pause where people didn’t want to come out, or whatever the case may be. So now it’s starting that reconnecting and getting people to come out to see what we have to offer as a public service.”

The stereotype of a library is that it is just a building filled with books. Library staff and board members want the public to know that isn’t the case.

“Especially for Hastings Public Library,” Struss said. “It’s not just a place for kids, either. If you want to find information, if you want to make something, if you want to pick up a tax form at tax season, this is that central point where you can come and get what you need to help you do whatever it is that you want to do, regardless of your age, your economic status or anything. This is open to everybody.” 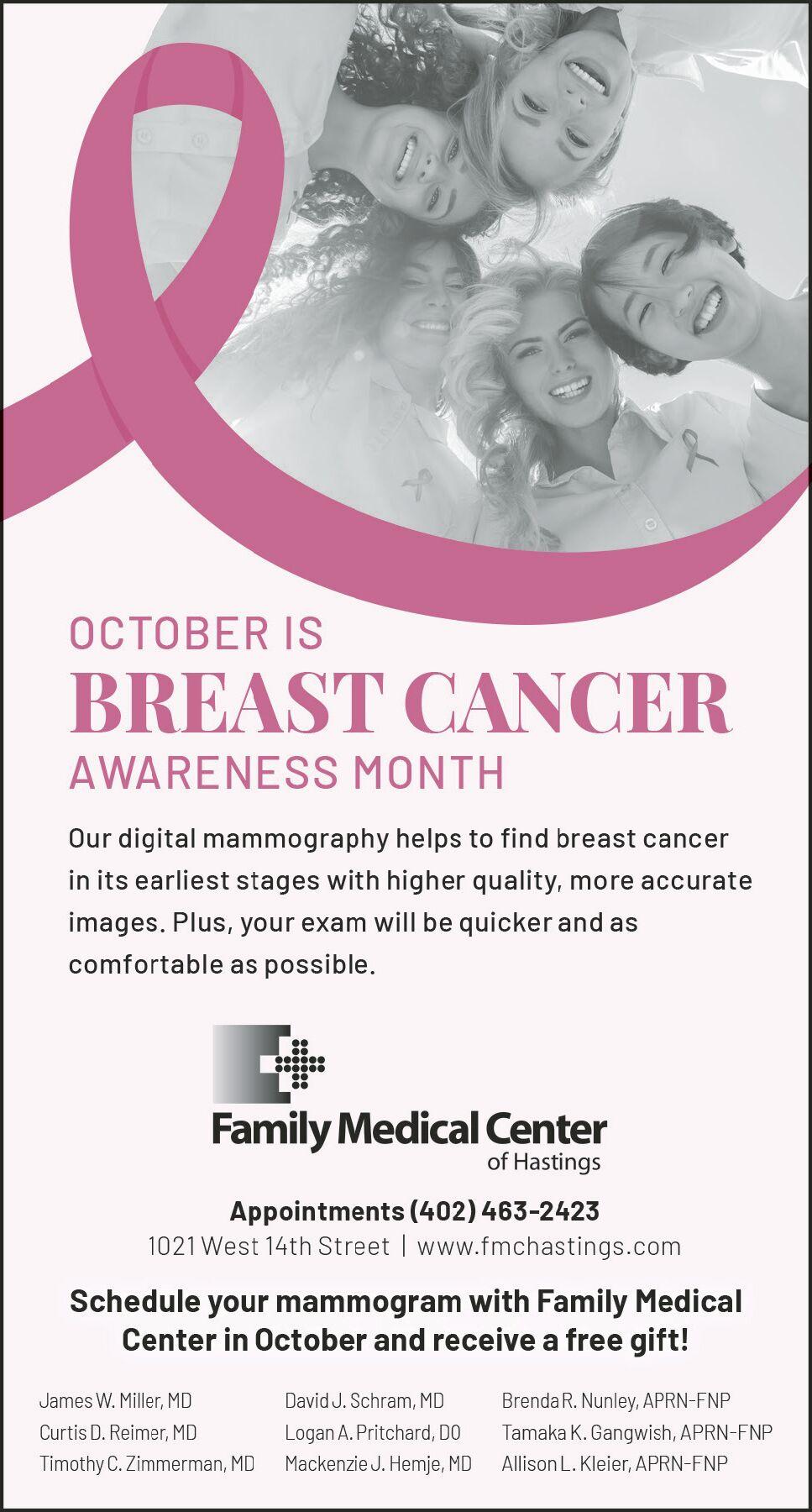