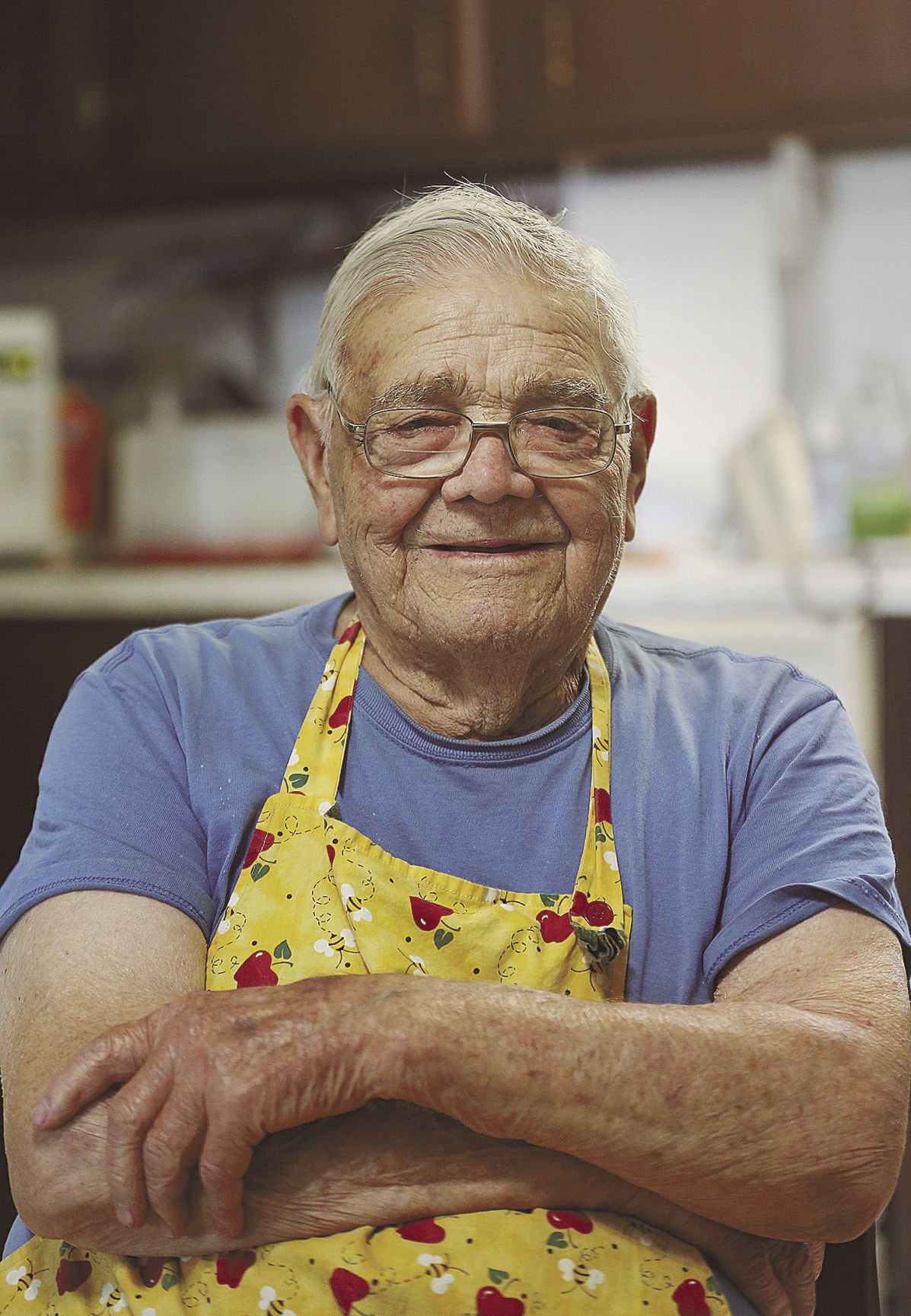 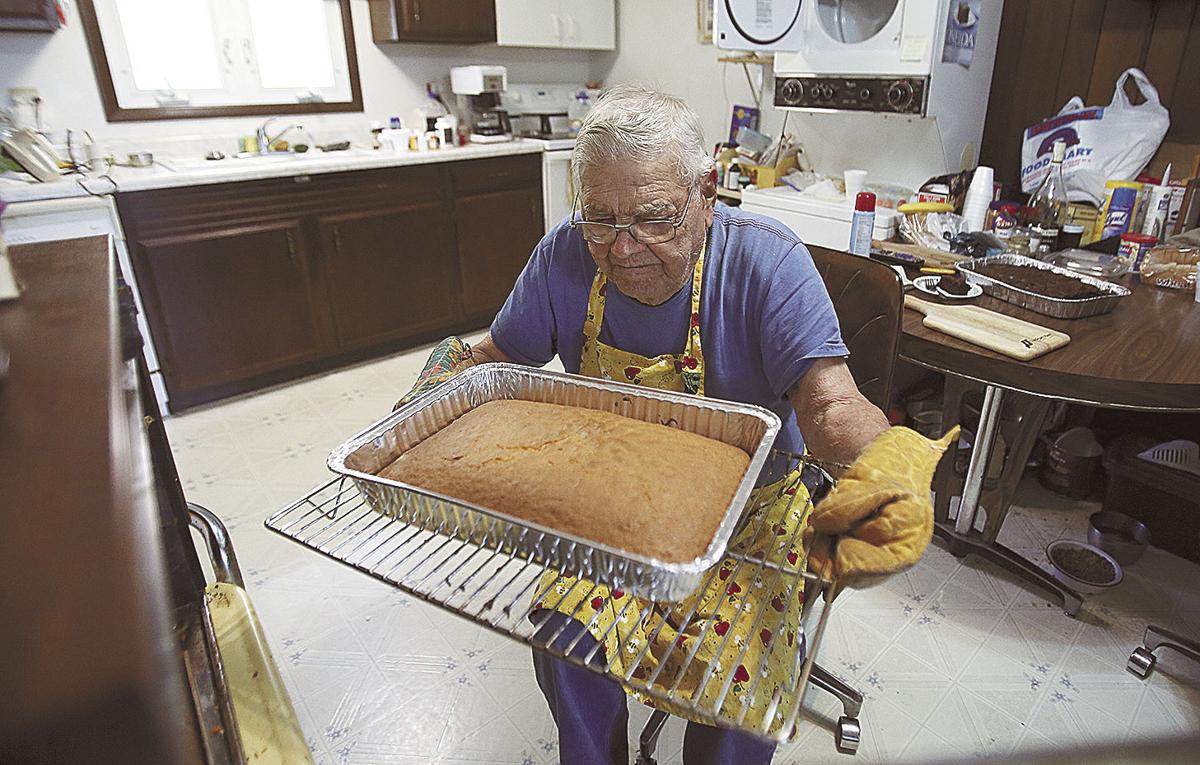 Leo Kellner removes a cake from his oven Friday. 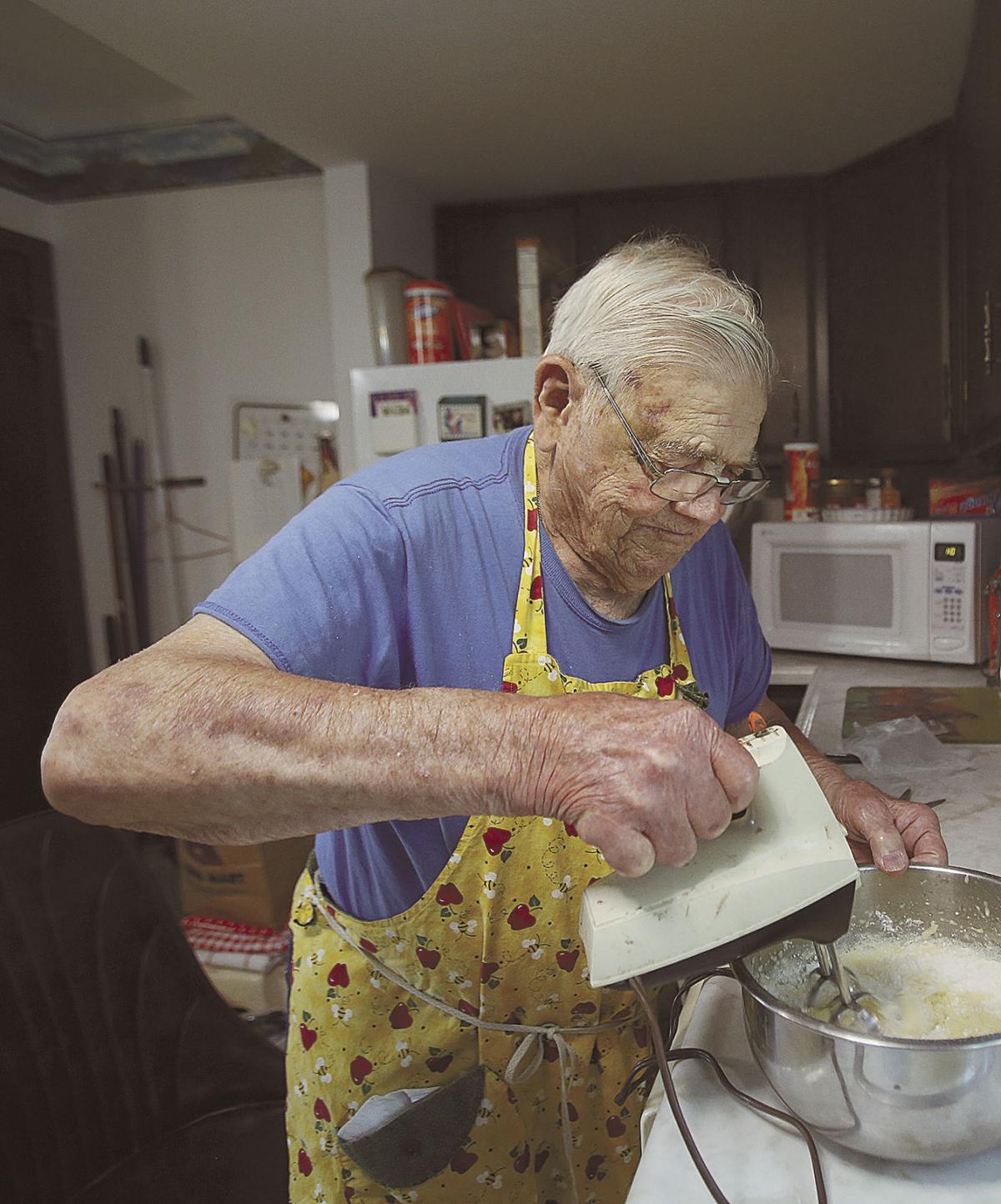 Leo Kellner mixes a yellow cake at his home May 13. 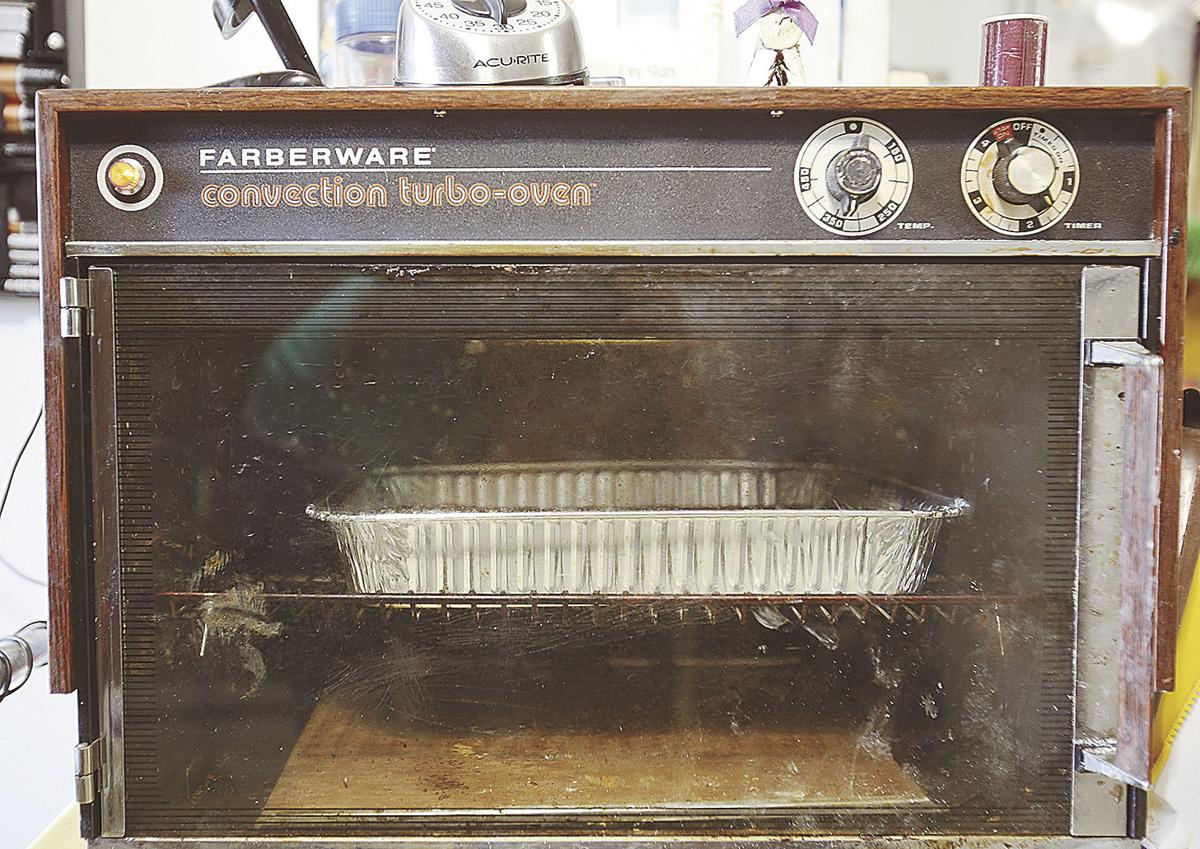 A cake bakes in a convection oven at the home of Leo Kellner of Hastings Friday.

Leo Kellner removes a cake from his oven Friday.

Leo Kellner mixes a yellow cake at his home May 13.

A cake bakes in a convection oven at the home of Leo Kellner of Hastings Friday.

As a young man growing up on his parents’ farm in Dimock, S.D., Leo Kellner got a taste of what it was like to go without.

Watching the family farm reduced to dust by some of the most extreme drought conditions in U.S. history during the 1930s, he soon found the once-ample treats prepared and served by his mother, Mary, scratched from the family menu.

It was all his father, Eony, aka Tony, could do to keep his family of seven from starving when he took on a new career as a brick and cement layer, using skills taught to him by his missionary father.

“We hardly had nothing,” Kellner said. “I made up my mind if I ever could, I would help people, do good things for people, because I knew what it was to be poor.”

Fast forward to the present, where, for more than three years, the 97-year-old has found a way to bring back those treats that disappeared from the family dinner table during the disastrous dust bowl era.

Drawing from skills passed on by his mother when times were good, Kellner puts his aging confection oven to good use almost daily, baking homemade cakes and pies from the same home he has occupied in Hastings for more than 62 years.

His passion for baking has produced hundreds of desserts each year for friends, acquaintances and even total strangers.

Tweaking a base recipe provided by a local baker, his pie selections include apple, cherry and a sugar-free peach/apple/cherry recipe to accommodate diabetics.

His cake menu knows no bounds, with chocolate, yellow and angel food among the usual offerings.

“I even made a wedding cake once for a good friend,” he said. “But those are not my favorite.”

His cakes are always free, with the cost of ingredients supplemented in part by donations and discounts from local markets. His only prerequisite is that the recipients pick up the finished products at his home.

His list of recipients is broadly generous: family members; friends; priests at his home parish of St. Michael’s; hospice workers who once cared for his late wife, Madelon; cancer patients; families gathered for funerals; and many others.

“I try to help everybody I can,” he said. “It makes me feel happy. God left me here for a reason and this is why I think he did. How many other 97-year-olds can do what I’m doing?”

Jane Rose and her husband, Verlin, first met Kellner and his wife in 1989. The couples shared a love of square dancing and often congregated in the same square dance camping club.

“He’s just a gem, he truly is,” Rose said. “My husband and I stay in touch with him and do little things for him. He’s just a good friend, a very trustworthy person.”

Having been gifted both pies and a cake through the years, she is quick to endorse his handiwork.

“They’re wonderful!” she said. “Everybody wants his recipe for the crust because they’re the best.”

The Rev. Michael Houlihan, pastor of St. Michael’s Church, also has tasted his fair share of pies and cakes from Kellner’s kitchen.

“They’re pretty darn good, they really are,” he said. “Every time we have a funeral here, he has one brought over. And every time one of us goes over there he gives us one. He’s always been that way.

“Some look inward, he looks outward. If you say ‘hi’ to him, he’ll probably give you a pie.”

Because of arthritis in his right hand, Kellner sometimes solicits the aid of his part-time caregiver to help him frost the cakes he bakes. Otherwise, he’s pretty much a one-man baking crew from start to finish.

But putting in long hours to complete a task is nothing new to him, having spent the better part of 26 years performing multiple duties for LeRoy Thom at T-L Irrigation before starting his own business repairing grain dryers at age 84.

Following the death of his wife, with whom he shared more than 72 years of marriage, he retired from his eight-state repair operation at age 92, leaving himself wanting for something to keep his hands and mind occupied.

“After my wife passed away, I sat there and didn’t know what the hell to do with myself,” he said. “My mother was quite a baker, and when I was the baby in the family for 13 years, I got to watch her and work on stuff. So I said, ‘Why can’t I bake?’ That first year, I baked 144 apple pies. It was something for me to do.

“I’m used to working. I couldn’t stand sitting around doing nothing. If I’m not doing something, I sit here and listen to old western music, but that gets old. And I don’t care to read much anymore. This way I’m doing something.”