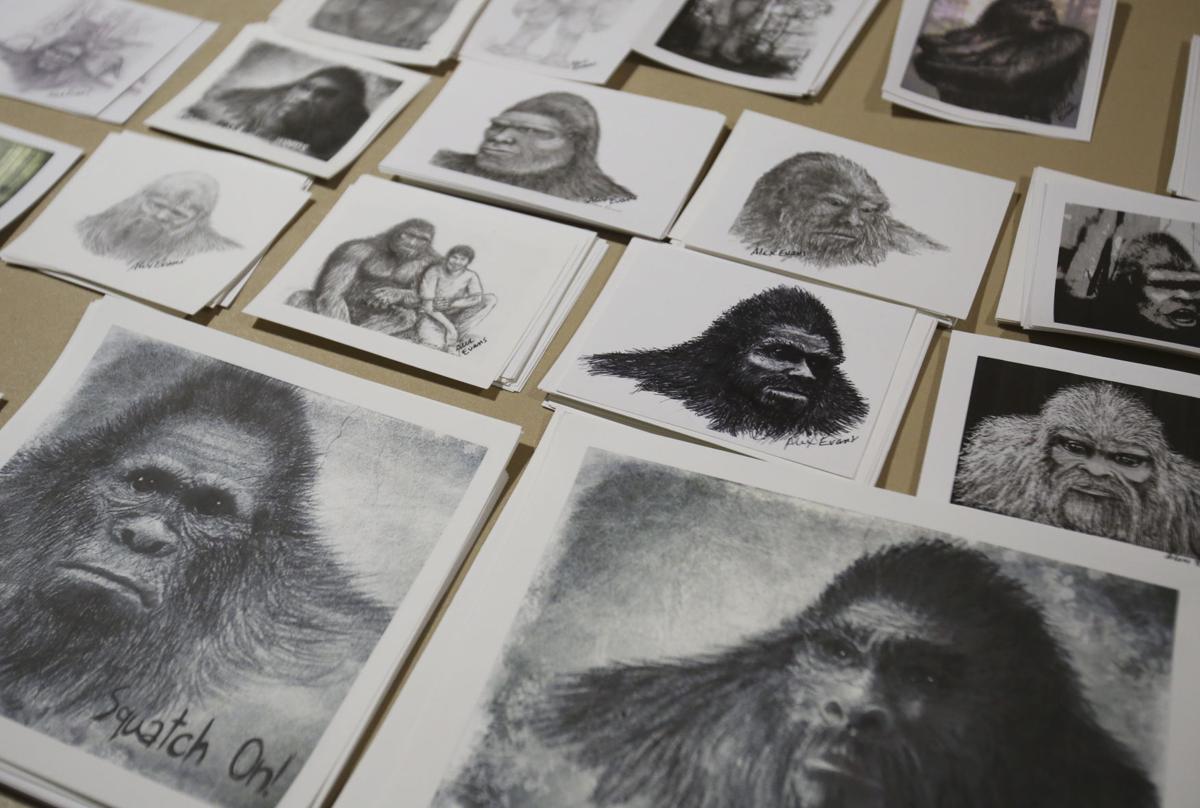 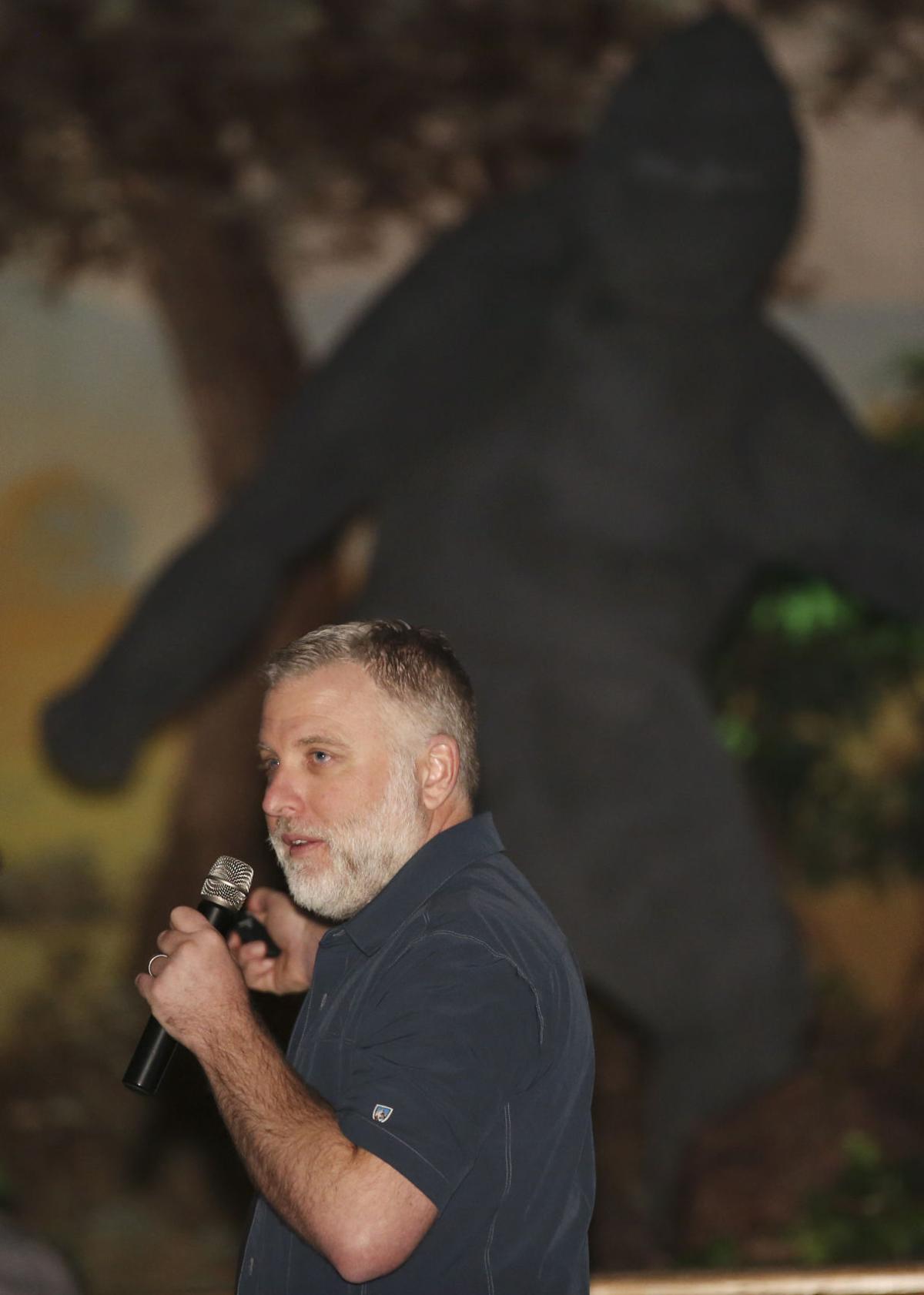 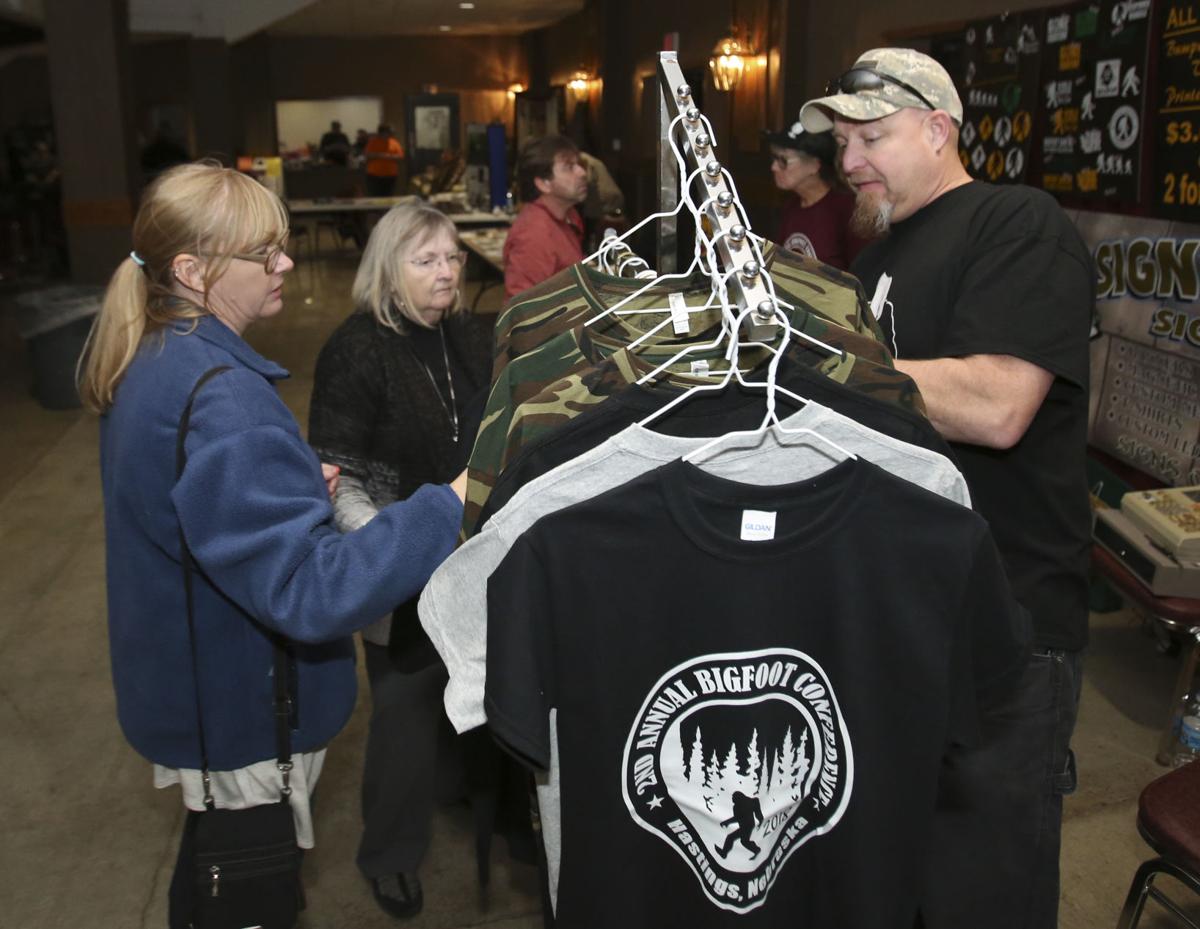 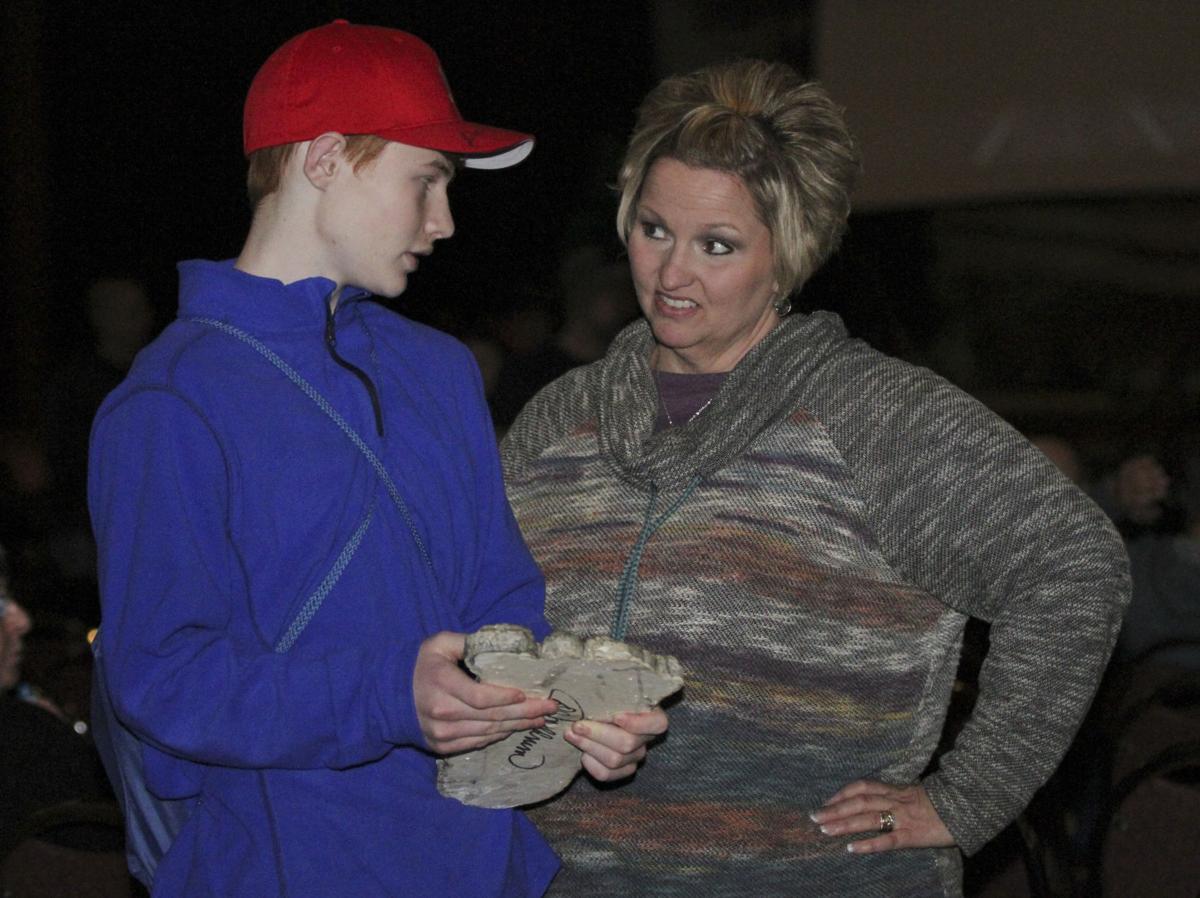 Aden Thompson of North Platte holds a replica footprint cast while talking to his mother, Cristy, during the second annual Bigfoot Conference at Hastings City Auditorium Saturday afternoon. Aden purchased the replica and other Bigfoot memorabilia to decorate his bedroom.

Aden Thompson of North Platte holds a replica footprint cast while talking to his mother, Cristy, during the second annual Bigfoot Conference at Hastings City Auditorium Saturday afternoon. Aden purchased the replica and other Bigfoot memorabilia to decorate his bedroom.

“The Man Who Created Bigfoot” didn’t disappoint those who came to hear him recall details of his famous encounter with “Patty” during the second annual Nebraska Bigfoot Conference Friday and Saturday at City Auditorium.

Bob Gimlin charmed the hundreds of Bigfoot enthusiasts who greeted him with a standing ovation as he was introduced by host Harriet McFeely following the world premiere showing of his movie “The Legend of Bigfoot,” a production-in-progress that is roughly 40 percent complete. Gimlin and Animal Planet host Cliff Barackman stole the show with their contrasting personas: Gimlin, with a down home cowboy drawl that made him seem all the more approachable and Barackman, using 14 years of experience as an elementary school teacher to present his evidence on Sasquatch with humor and simplicity.

A strong supporting cast of Bigfoot analysts helped keep the estimated 700-plus people who attended some or all of the two-day conference entertained and — in some cases — enlightened on the latest evidence available pertaining to sightings of the evasive creature.

In his opening comments, Gimlin addressed some controversy that prevented him from speaking at a 50th anniversary gathering commemorating the Patterson-Gimlin film at Bluff Creek in Northern California in October 2017, an event attended by McFeely and Bigfoot enthusiasts from around the world. Gimlin was scheduled to speak but was instead passed over — much to the disappointment of those who came to hear him —in favor of an auction featuring Bigfoot memorabilia. Though obviously disappointed by the turn of events, Gimlin’s comments Saturday suggested he had put the slighting behind him.

“It was supposed to be about the 50th anniversary film footage,” he said. “It shouldn’t have been about an auction to generate a few dollars, I reckon. That’s the way I look at it, folks. If you heard about it, it’s behind me now, and this group here of Harriet’s made all the difference of what I didn’t get to do in California, OK?”

He explained how the name Bigfoot was likely coined in Northern California based on the Roger Patterson-Gimlin footage in 1967, one of several hundred names that have been used down through the centuries to describe the legendary beast.

“When Roger Patterson showed me the first (foot) casts, he said, ‘Bob, that’s a big foot!’ And I said, ‘It darn sure is!’ Anybody who has got a foot that size you can call it a Bigfoot.”

In his presentations, Barackman pointed to the congruency of Bigfoot evidence to make his case for the existence of Sasquatch. Speaking matter-of-factly regarding his own belief in the creature’s existence, he said the similarities between hand prints, casts and other evidence collected are too alike to ignore.

“It all fits together,” he said. “Historical newspaper reports from the 1800s describe a creature that looks the same with the same behaviors and characteristics that people who maybe saw one yesterday describe. The footprint cast evidence is congruent, no matter who cast the footprint or when it was cast. Whether it was in Georgia in 2011 or Bluff Creek in California in 1958, we’re seeing the same anatomical features. The bones in the foot, they’re all in the same spot, proportionately speaking.

“Things that we can see in footprint evidence we can actually see evidence of in the Patterson-Gimlin film, for example: The flexibility of the foot or the elongation of the heel. All of these features are consistent within the data set itself. So the importance isn’t one piece of information, it’s this mosaic picture that all of the evidence lays out in front of us.”

Based on the ongoing feedback received from attendees throughout the two-day event, McFeely believes the event was well appreciated by those who attended. The mountain of Bigfoot memorabilia in tow among attendees suggested the same. A sort of “long-lost friend” mentality brought together many in attendance to share their Bigfoot encounters amongst themselves, she said.

“Everybody was talking to everybody,” she said. “They’d say, ‘It’s like I’ve known you for 10 years!’ I think that’s maybe the power or attraction of the Bigfoot.

“People that are into Bigfoot, they don’t have anybody to talk to. They don’t want to tell their story because people may say, ‘Oh, you’re a liar,’ or ‘You just want to be on Animal Planet.’ Nobody likes that, so they don’t tell anybody. But here they can.”

For Shirley Gilster, 65, a horticultural technician from Omaha, the conference served to reaffirm her already strong belief in the existence of Bigfoot. An enthusiast of unsolved mysteries, she took careful notes as she listened to speakers expound on the latest evidence related to Bigfoot.

“I just like to know everything: I have intense curiosity,” she said. “I’ve gotten more interested in Bigfoot the past few years because it’s more out there. I missed the one (conference) last year and I kicked myself.

“What put it over the top (to attend this year) was when I knew Bob Gimlin was going to be here. It was like, ‘Yeah, I can’t miss seeing him!’ They just don’t make them like him anymore: A true gentlemen.”

Meeting Gimlin brought out the fan in her, she said.

“I completely geeked out,” she said. “I didn’t think that I would, but he’s just such a lovely man.”

Already Gilster has plans to attend next year’s conference. The variety and wealth of information presented impressed her. And if she is ever able to retire, she jokes, she would like to experience a Bigfoot expedition firsthand.

“Hopefully this will get more people thinking about it as a reality instead of just something to ‘snortel’ at,” she said. “People need to open their minds. I’m happy to note that there are more people in Nebraska who are interested than I thought.”

Not everyone who attended was convinced of Bigfoot’s existence, however. Even so, being skeptics didn’t detract from the experiences of Troy Fisher, 47, of Hooper and his brother, Michael, 48, a recent transplant to Malmo from Florida.

Michael said he came to the conference at the invite of a friend from Fremont Pentecostal Church. He figured since his ticket was paid for by his friend he had nothing to lose. He didn’t take any of what he heard too seriously, he said.

“I came for the entertainment and fellowship,” he said. “It’s strictly entertainment. I don’t subscribe to any of it (but) it’s been fun. I’ve had a good laugh with my brother over it.

“Let’s look at the evidence here. They’ve got footprints, a video, and people who have seen Bigfoot, so they’re asking us to take this on faith. I pretty much thought it was going to be somebody’s take on evolution, and I’m not a subscriber to evolution.”

Though he once lived in Washington near an area known for Bigfoot activity, Troy said he never witnessed anything that would lead him to believe in Bigfoot. Despite this predisposition, he tried to keep an open mind as he listened to the evidence presented. Nevertheless, he wasn’t swayed by anything he saw or heard.

“When I was a kid growing up in Nebraska I went to camp and they had a Bigfoot guy (storyteller) there and he’d scare us half out of our wits and what not,” he said. “I just wanted to come and see what all these guys investigating the Bigfoot phenomenon had to say. I haven’t heard a single thing here today that would absolutely sway my mind to believe there is any such creature out there.

“There’s too much missing evidence. I find it more entertaining than anything else. If they had fur samples or blood samples ... every time you want to bring this kind of evidence up, there are those conspiracy theorists out there that say the government is hiding it, just like UFOs. I just think it’s a part of American folklore.”

It was the inclusion of Gimlin and Barackman to the lineup that lured Dennis and Cheryl Calkins, both 64, of Arvada, Colorado, to the conference. The retired malt brewers were duly impressed with the duo and Gimlin movie, they said.

“I loved it,” Cheryl said of the film. “It almost brought tears to my eyes. Even though it was hand-drawn, it was really enthralling. And the story didn’t end there. The story continued for the rest of the day. It was very good.”

“I enjoyed it,” Dennis said. “It was also nice talking to Bob, because it really hits about him being just a regular guy, an honest cowboy. It was worth coming to.”

Having experienced two possible Bigfoot encounters themselves, they welcomed the chance to interact with the various speakers and fellow attendees about all things Bigfoot.

“They were very approachable,” Dennis said of the presenters.

“I met some pretty friendly people around here,” Cheryl said. “Folks around here are really friendly!”