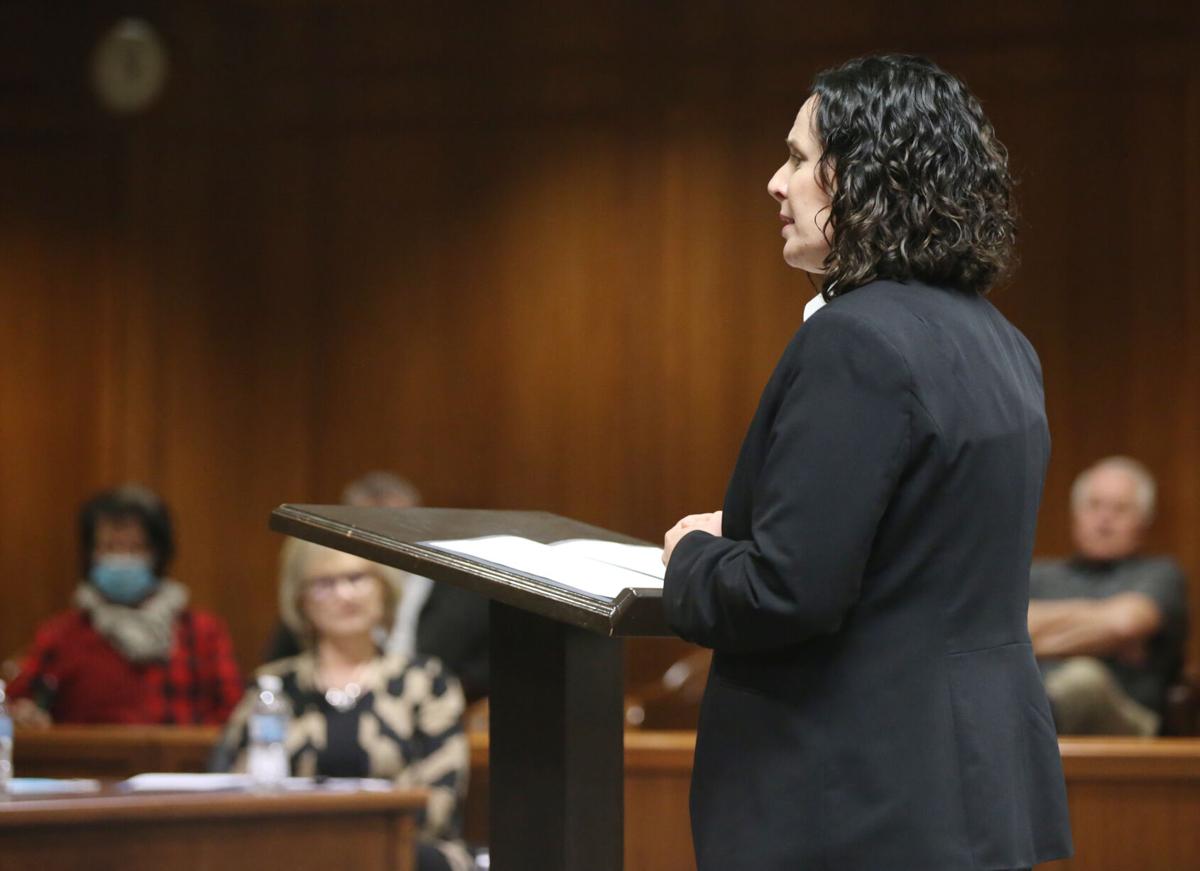 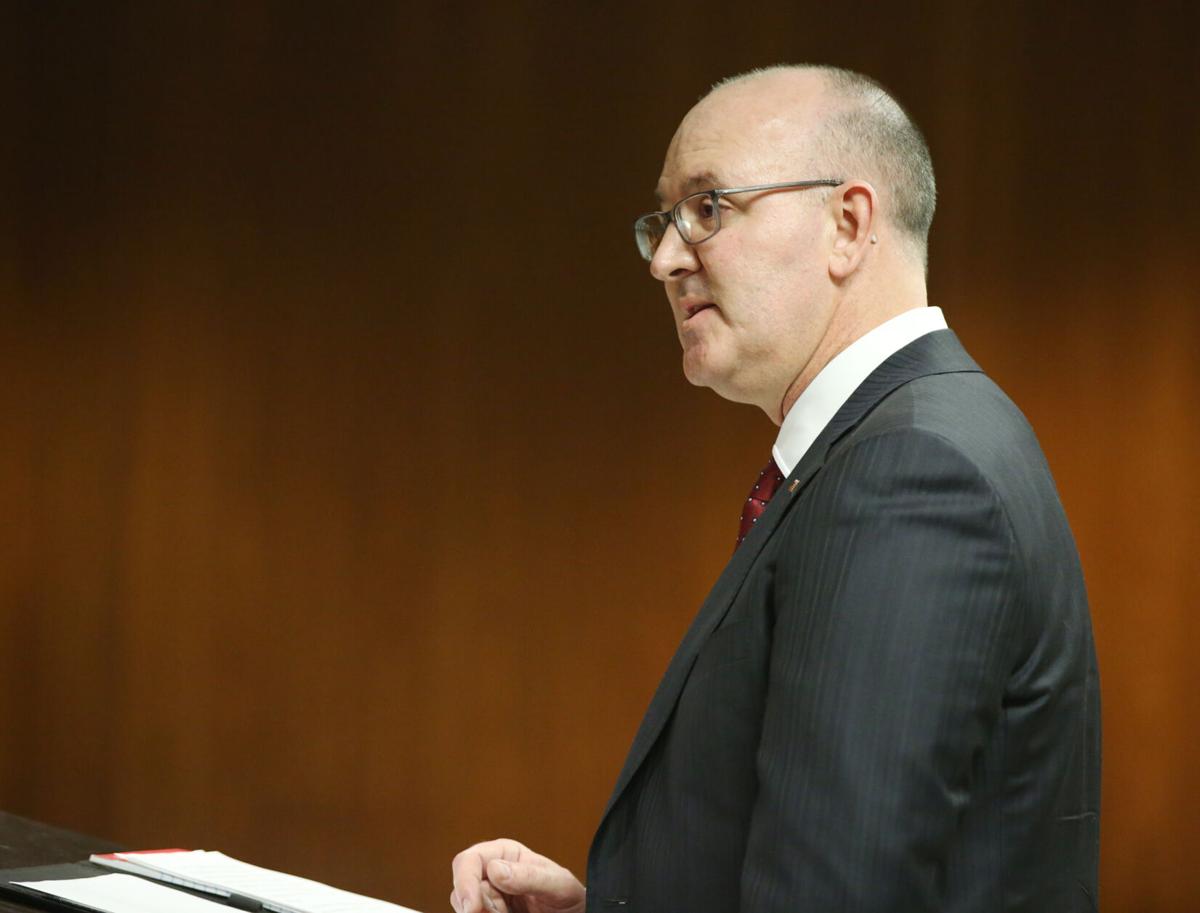 Jason Bergevin of Lincoln speaks Monday about his application for the 10th Judicial District judge vacancy at the Adams County Courthouse. 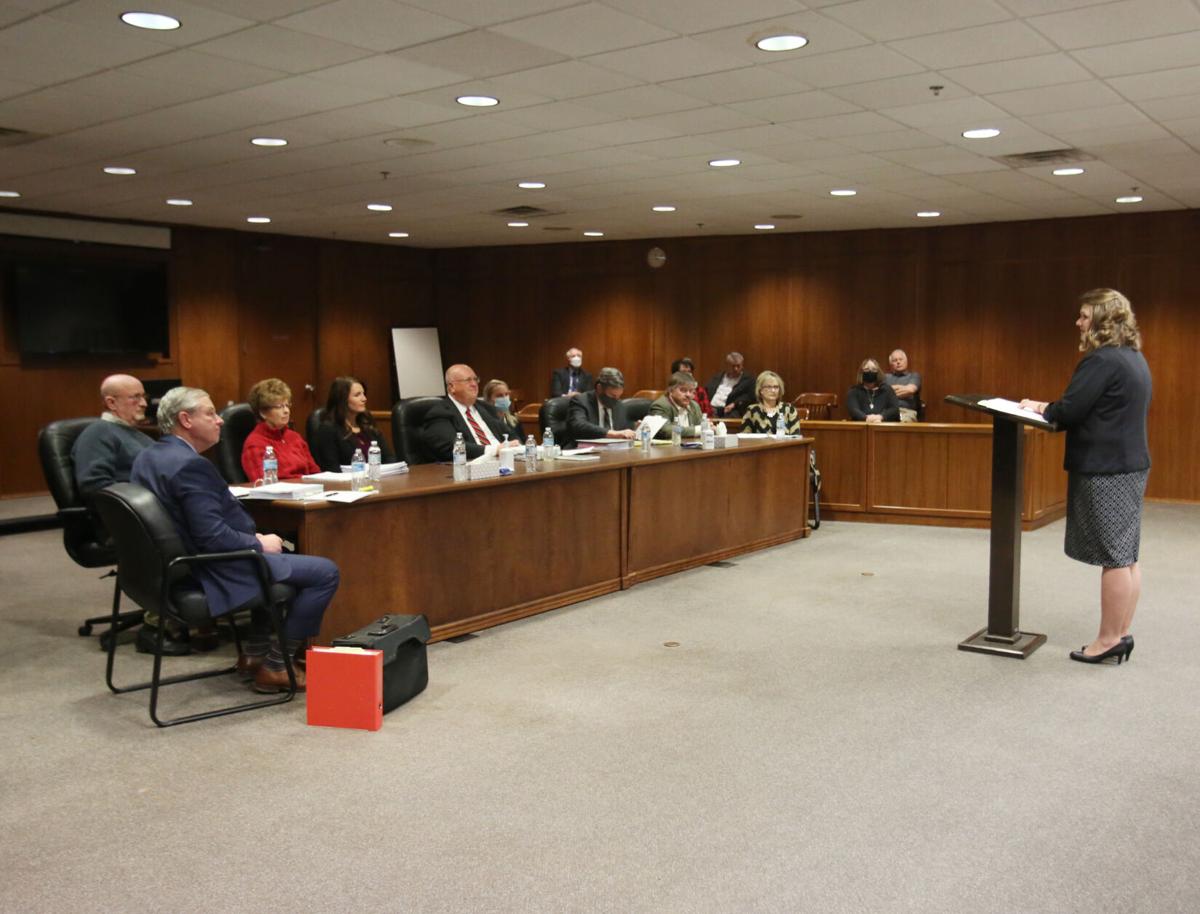 Sara Bockstadter of Kenesaw speaks to the Judicial Nominating Committee during a hearing for 10th Judicial District judge vacancy Monday at the Adams County Courthouse. 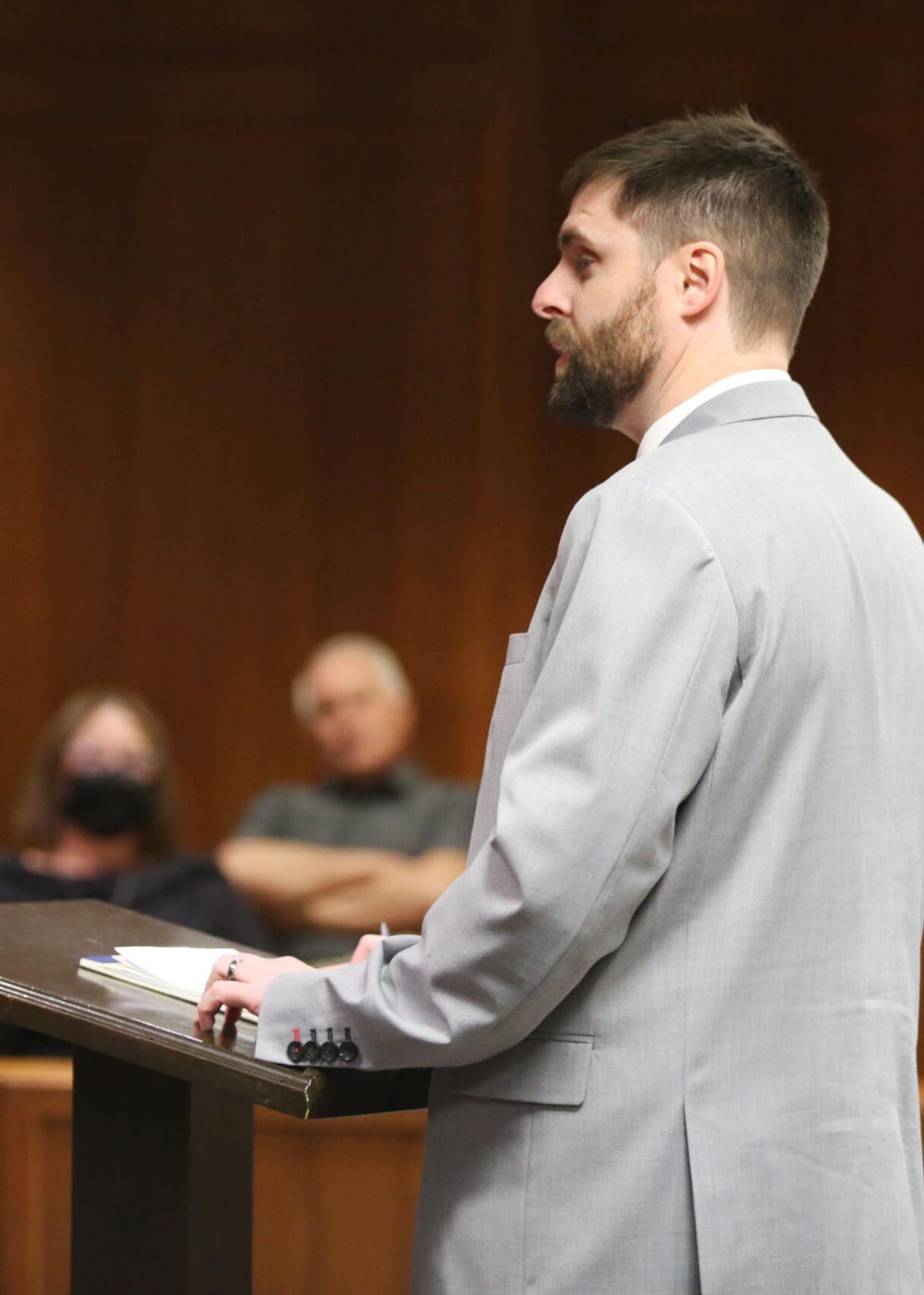 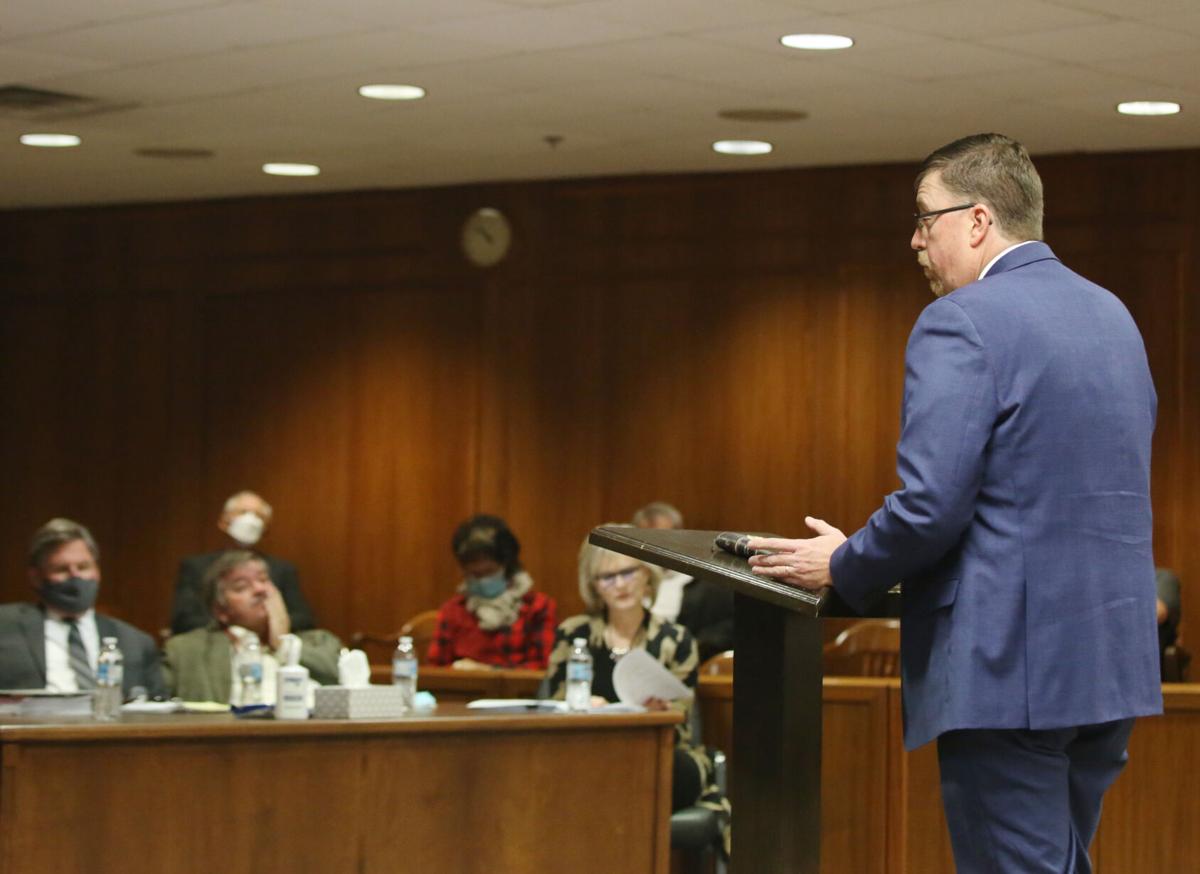 Speaking in the district courtroom Monday, Brian McQuay of Alma answers questions about his application to fill the 10th Judicial District judge vacancy at the Adams County Courthouse. 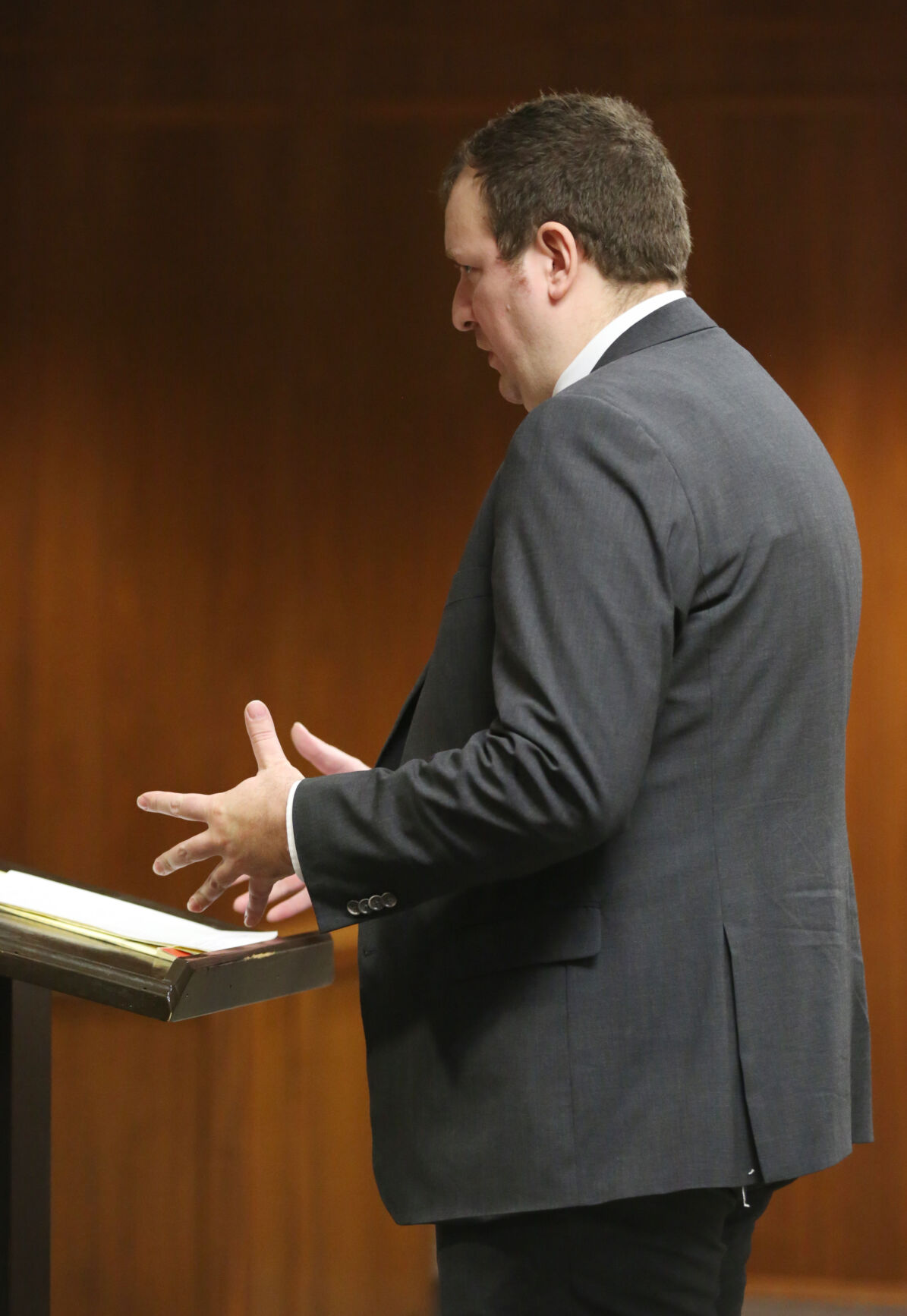 Henry Schenker speaks Monday about his application for the 10th Judicial District judge vacancy at the Adams County Courthouse. 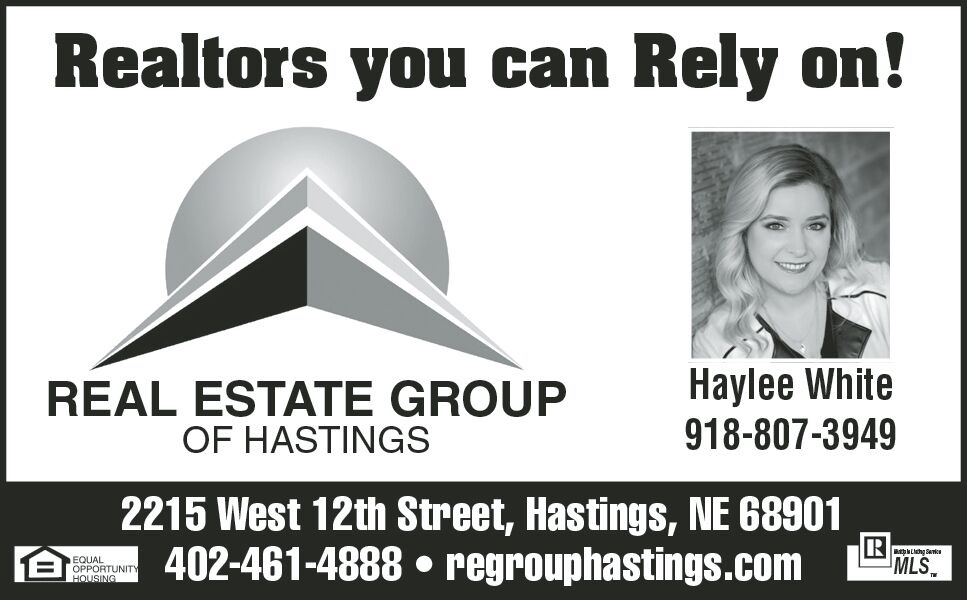 Jason Bergevin of Lincoln speaks Monday about his application for the 10th Judicial District judge vacancy at the Adams County Courthouse.

Sara Bockstadter of Kenesaw speaks to the Judicial Nominating Committee during a hearing for 10th Judicial District judge vacancy Monday at the Adams County Courthouse.

Speaking in the district courtroom Monday, Brian McQuay of Alma answers questions about his application to fill the 10th Judicial District judge vacancy at the Adams County Courthouse.

Henry Schenker speaks Monday about his application for the 10th Judicial District judge vacancy at the Adams County Courthouse.

Six candidates to become the area’s next district court judge introduced themselves to the Judicial Nominating Commission during a public hearing Monday at the Adams County Courthouse.

Melodie Turner Bellamy of Kearney, Jason M. Bergevin of Lincoln, Sara J. Bockstadter of Kenesaw, Morgan R. Farquhar of Cambridge, Bryan S. McQuay of Alma and Henry C. Schenker of Hildreth submitted applications for the appointment in the 10th Judicial District. The vacancy is due to the retirement of Judge Stephen R. Illingworth in November 2021.

Overseen by Nebraska Supreme Court Justice William Cassel, the commission allowed each applicant eight minutes of speaking time, which could be used by the candidate or another speaker on his or her behalf.

Following each candidate’s presentation, Cassel asked if anyone wanted to speak in opposition. No one spoke against any applicant at the hearing.

The applicants spoke in a random order selected before the hearing.

First to speak was Farquhar.

He said he clerked at a law firm in Hastings for the better part of a year before going into a full-time private practice. Currently, Farquhar is the Furnas County Attorney.

“My entire practice has been west of Lincoln,” he said.

When asked about whether he’d be willing to move to the district, he said he intends to do so. He said his family’s goal has been to stay within 90 minutes of extended family in Kearney, and Hastings would be closer than that.

He said two essential characteristics a judge needs to have are judicial temperament and time management skills.

“I am deliberate and respectful in my actions,” he said. “I’ve gone by the principles of respect and kindness.”

After McQuay graduated from law school, he worked as a prosecutor in Phelps County with Timothy Hoeft, who now serves as a judge in the county court.

Between his private practice and his service as the Harlan County Attorney for nearly 20 years, McQuay said he’s handled about every kind of civil case. He and his wife have two children.

He is licensed to practice law in Kansas as well as Nebraska. He said he’s had clients with land in both states so it was beneficial to know the laws in each state.

McQuay said he’s learned many lessons from other lawyers and judges in the district that would serve him well as judge. He said it’s important for a judge to be courteous and fair. He said the public needs to be able to see consistency in a judge’s decisions so they know what to expect.

McQuay said he would use all he’s learned from others and apply it to his duties on the bench if chosen for the seat.

“I’m ready for a new challenge in my career,” he said.

Bellamy said she and her husband have four children, three of whom will soon be in college or beyond, making it the ideal time in her life to make a move to the 10th Judicial District.

As Kearney County Attorney, she’s been involved in all levels of cases, as well as the Central Nebraska Drug Court program. She has argued both civil and criminal cases before the Nebraska Supreme Court.

She said having worked in small, medium and large jurisdictions has prepared her to best serve the people of the 10th Judicial District.

“I grew up in Eustis,” she said. “That instilled in me a great sense of community.”

She has volunteered for a number of organizations and served on a variety of committees through her career.

Bellamy said she’s learned to be courteous, kind and respectful to everyone she comes across, traits that will translate well to serving as a district court judge.

“I believe I have the temperament and experience necessary to serve this district well,” she said. “I’m not afraid to make timely and difficult decisions.”

Bockstadter said her strength as a judicial candidate stems from her familiarity with the 10th Judicial District.

“This district is my home,” she said. “I possess a familiarity with the district as a whole.”

In her career, Bockstadter has practiced law in all but one county in the district. She said she brings a broad knowledge of the legal profession to the table. She has served as prosecutor and defense attorney, as well as years in private practice handling civil matters.

She said she wants to become a judge as a way to serve the community.

“I did not embark on this change lightly,” she said. “It was out of a deep sense of responsibility to the community.”

When asked about any potential conflicts of interest that could arise because her husband is an employee of the Nebraska State Patrol, she said it’s had a minimal effect on her practice so far. She is former county attorney for both Webster and Nuckolls counties.

She also noted that her husband is in an administrative role and isn’t actively involved in casework, making the likelihood of conflicts even less.

Even if there was a conflict, she said, she would be able to recuse herself and allow the district’s other judge, Terri Harder, to handle the case.

“I anticipate that occurring very rarely,” she said.

Schenker is the Franklin County Attorney and said he has practiced in all but one county in the district.

He said he would bring a wide array of law experience to the bench if selected, and it would fulfill a longtime professional goal.

“I became interested in being a judge in law school,” he said.

He spent the summer after his first year in law school clerking for a circuit judge in Alabama, a similar position to the district court in Nebraska. Schenker was involved in writing decisions and reviewing transcripts and enjoyed the process.

“I felt it was my ultimate calling as a public servant,” he said.

When asked about his experience with jury trials, Schenker said it has been limited but believes it’s a weakness he could overcome by learning more about the law.

He said he is an avid reader and always enjoys learning. He knows some French and a little Spanish, as well.

“I feel a district judge is someone who needs to always be open to learning,” he said.

Bergevin is an assistant attorney general with the Nebraska Attorney General’s Office. He is also a judge advocate in the U.S. Air Force. He and his wife have three children.

As an assistant attorney general, he said his office was in Lincoln, but he worked with counties across the state to prosecute cases.

“I want to preside in multiple counties because I like the variety,” he said. “That travel and diversity is something I want to maintain as a judge.”

Bergevin was born and raised in Omaha. He said it’s the first time he’s applied to be a judge because he feels it’s the right fit for him. He wanted to be involved at the district court level because of the nature of cases handled in the court.

Bergevin said he started his career as a secondary teacher, but ended up going to law school because a friend suggested it and he liked the change.

He’s prosecuted 14 jury trials since joining the office. During his career, he’s been involved in closer to 50 trials. He has led nine grand juries in courts across the state. He also has been an advocate for administrative hearings of mental health boards.

His law career has focused on prosecution, but he said he’s willing to educate himself about the appropriate law for the new position.

“I am confident that my skill set would help me litigate any kind of case,” he said.

Bergevin said he would do his best to be a successful successor to Illingworth, whose vacancy he would be filling.

“He served honorably in this position for over 30 years,” Bergevin said. “I would strive to meet the high standards he set.”

After the public hearing concluded, the commission went into executive session for further discussion. The applicants were asked to wait while the commission considered whether they would like to speak with any candidate privately. The commission didn’t request any private conversations and released the applicants after a few minutes.

The nominating commission is tasked to forward at least two candidates to the governor within 90 days from the time the vacancy occurs. The names of those nominated will be released by the governor’s office at a later time. The final selection for the position is made by the governor after interviewing each nominee.

Three finalists have been named for the vacant district court judgeship in Hastings, according to a news release issued by Gov. Pete Ricketts’…