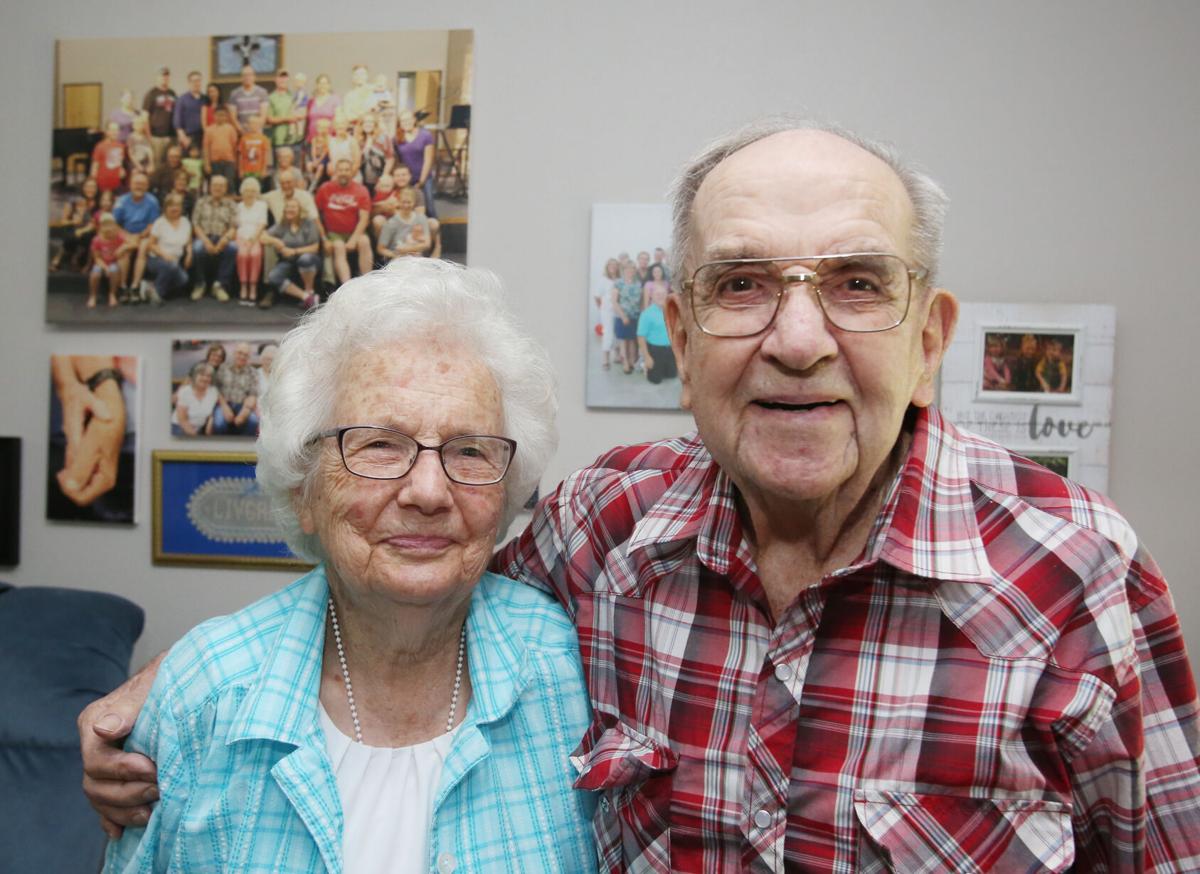 Dale and Ruth Livgren are pictured in their home in Hastings Thursday. The couple is celebrating their 95th birthdays and their 75th wedding anniversary this month. 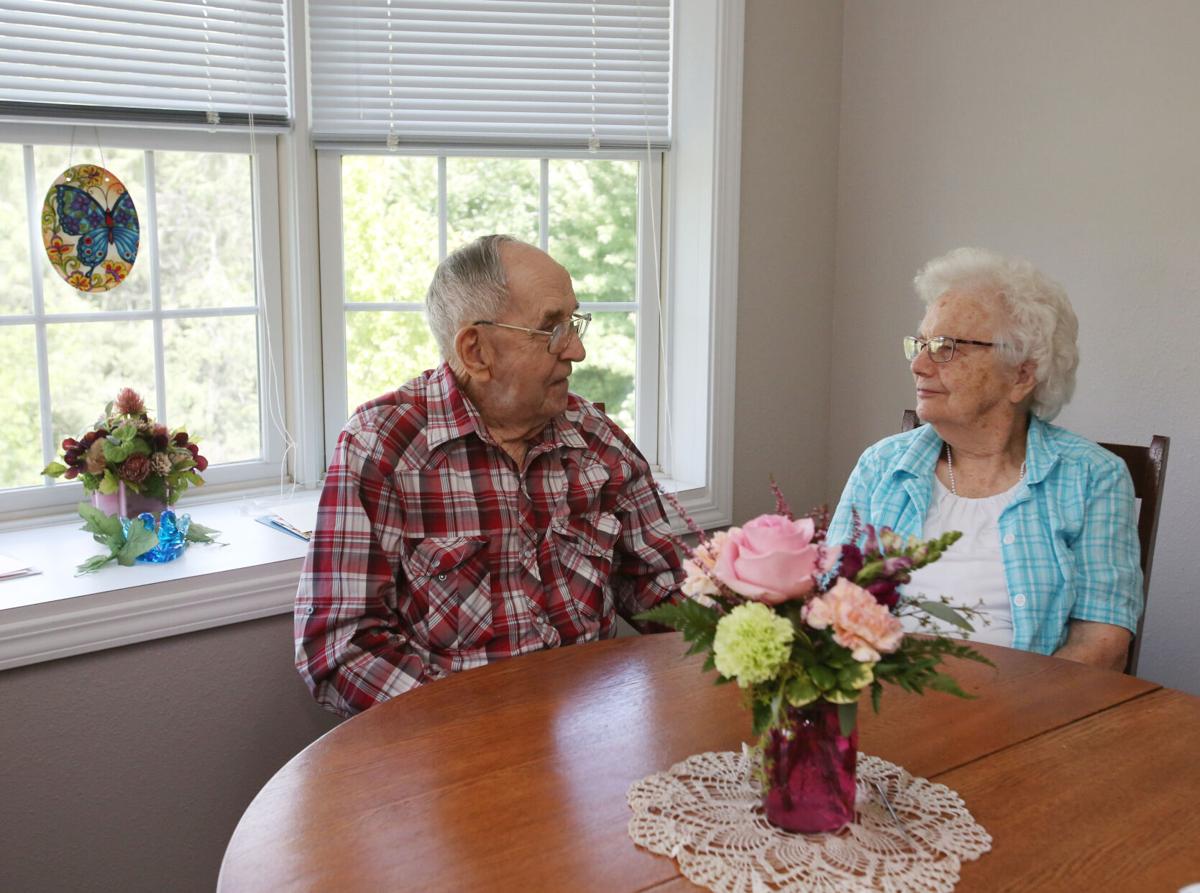 Dale and Ruth Livgren talk about their life together during an interview at their home in Hastings Thursday. The couple is celebrating their 95th birthdays and their 75th wedding anniversary this month. 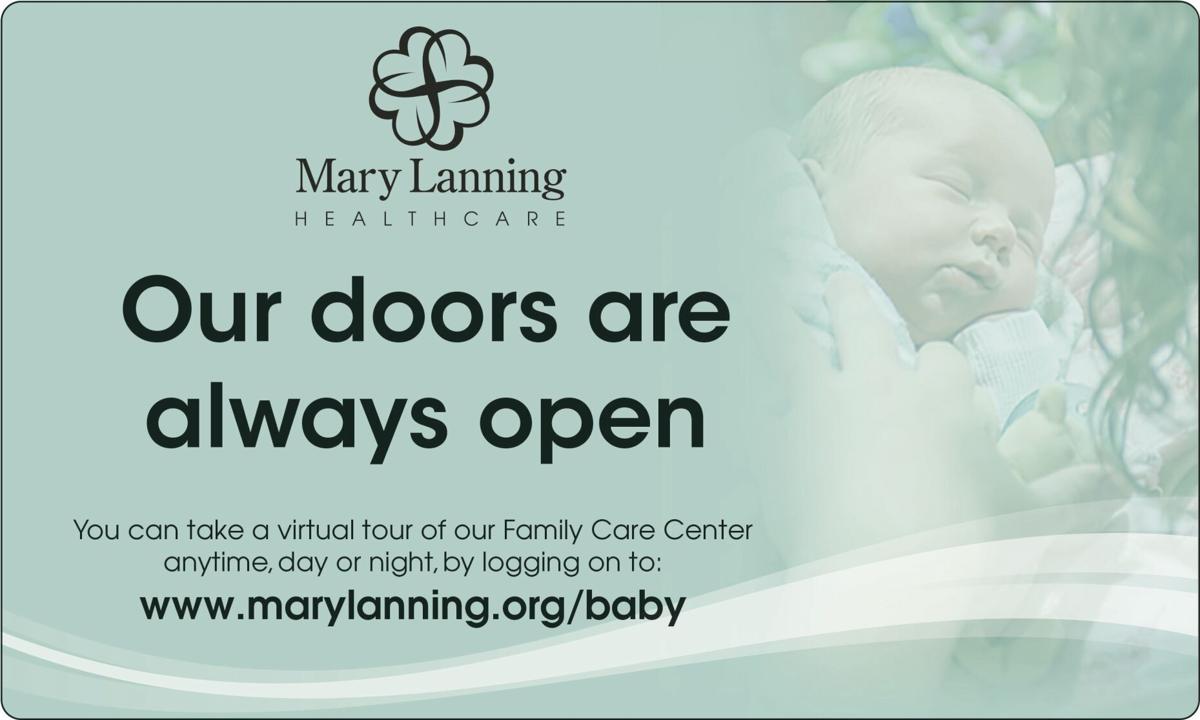 Dale and Ruth Livgren are pictured in their home in Hastings Thursday. The couple is celebrating their 95th birthdays and their 75th wedding anniversary this month.

Dale and Ruth Livgren talk about their life together during an interview at their home in Hastings Thursday. The couple is celebrating their 95th birthdays and their 75th wedding anniversary this month.

Dale Livgren and Ruth VonSpreckelsen entered this world three days apart in 1926. They grew up on family farms just seven miles from one another in central Clay County.

Even so, they had never met until they ended up in eighth grade together in Clay Center in September 1939. And what little they knew of each other at that point, they didn’t like one bit.

“We didn’t get along at all the first year,” Dale said Thursday, turning to his wife seated next to him in their apartment at Heritage at College View in Hastings. “We just kind of hated each other, didn’t we?”

“But that all changed,” Dale said, a twinkle in his eye.

Dale Livgren celebrated his 95th birthday on Tuesday. Ruth followed suit on Friday. And on Sunday the couple will celebrate the 75th anniversary of their marriage, which was solemnized just days after they both had turned 20 years old.

God willing, and as long as public health restrictions don’t prevent it, they will gather to celebrate those milestones at the end of this month with many members of their large family, which includes four children, 13 grandchildren and 33 great-grandchildren.

The Livgren family footprint is large, with grandchildren and great-grandkids living in Utah, North Carolina and several states in between. They will gather from far and wide to rejoice that a couple of long-ago classmates set their initial antagonism aside, fell in love, joined their lives on Aug. 22, 1946, and have been working together ever since to make life better for others.

Judith Woods of rural Fairfield, the third of the Livgrens’ four children, said her parents are willing to endure quarantine afterward or whatever is required so they can celebrate with their loved ones and yet keep their assisted-living community safe from the novel coronavirus disease, COVID-19.

“We don’t want to wear them out,” Woods said of Dale and Ruth with a laugh. “It’ll be about 70 of us getting together. That’s pretty much immediate family.”

Dale grew up on a farm 3 ½ miles north and 1 ½ miles east of Clay Center. His parents were Albert and Judith Livgren, and he had three older siblings: brother Arnold, who was 16 years his senior; and sisters Thelma and Eunice. All are deceased now.

Ruth’s family lived two miles south of Clay Center. Her parents were Ernest and Betty VonSpreckelsen, and she had twin brothers, Robert and Elbert, who were born just 11 months after she was. Elbert now lives in Kearney, and Robert is deceased.

While Ruth attended “town school” in Clay Center from the beginning, Dale didn’t come into town for class until the old Price country school in his neighborhood closed its doors.

That’s when sparks of contempt first flew between Dale and Ruth, who was one of just three girls in their class.

Eventually, hearts and minds changed to the point where Ruth allowed Dale to drive her home after a meeting of the Girl Reserves, a youth organization affiliated with the YWCA that later became known as Y Teens.

Thereafter, the old sparks of disdain burst into the flame of romance — and by their junior and senior years in high school they were a serious item. Dates usually consisted of Dale picking Ruth up in his 1936 two-door Ford for a trip into Clay Center or a neighboring town — perhaps Harvard or Sutton — to see a movie.

“We went to an awful lot of movies,” Ruth said.

The 1930s had been lean years in Clay County, with the Great Depression, drought and dust storms affecting everyone. And Dale and Ruth’s high school years took place under the cloud of World War II, with rationing of gasoline and other supplies a part of everyday life.

Dale and Ruth graduated from high school in 1944, and Dale went into farming with his dad and brother. He went through intake for military service but was turned away because of high blood pressure readings.

Meanwhile, Dale and Ruth continued their courtship — not without hitting a few bumps in the road, but never encountering a conflict they couldn’t overcome.

Woods said family members have asked her mother if she and Dale ever broke up during their years of dating, and the answer is a definite yes.

Ironically, then, Dale and Ruth chose their birthday week for their wedding in 1946. After the nuptials, they headed off to the Rocky Mountains of Colorado for their honeymoon in the same 1936 Ford they had driven to the movies so many times. (The brakes didn’t work too well on that car, but they obviously survived.)

One of their most memorable wedding presents was the kind of gift that keeps on giving — especially for a young farm couple.

“We got a milk cow for a wedding present from my dad,” Ruth said.

Raising corn, cattle and kids — with a song

Dale and Ruth lived, farmed and raised children on the Livgren home place northeast of Clay Center. The shorthorn cow from Mr. VonSpreckelsen was their entry into the milking business, and they went on to operate a Grade A dairy on the farm for several years.

Some of Dale and Ruth’s happiest memories surround their camping and fishing excursions with the children, first with tents and later with a small pickup camper.

“Starting in the 1960s, we went to the lake almost every Sunday in the summertime,” Woods said.

Through the years, Dale and Ruth got better and better camping equipment and eventually ended up with a 26-foot trailer. They traveled to gatherings of the Good Sams, a club for camper and recreational vehicle owners.

The couple also was able to make several big trips through the years, with destinations including Europe, Alaska, Hawaii and the U.S. Northeast.

Other special memories involve visiting with neighbors; square dancing; and Dale’s music, which has been with him since boyhood (he grew up in a musical family) and still is an important part of his life.

“Dad sings and plays with his guitar, still to this day,” Woods said. “It was common when Mom was finishing up supper that he’d sing to her.”

Dale served on the Clay Center Board of Education, worked some as an auctioneer, and enjoyed rodeos and participating in draft horse pulls.

“We like draft horses and raised them,” Ruth said.

Ruth was a founding member of the Happy Homemakers Extension Club, which was established in 1954 and continued into the 1990s.

Both Dale and Ruth have been active members of the Clay Center Christian Church.

‘We can’t be thankful enough’

In 1986, Dale and Ruth swapped homes with son Doug and his family, who had been living on a farm near Spring Ranch west of Fairfield. There, they watched over the family’s cattle on pasture while Doug took the lead in the farming operation.

Years later, they moved into Clay Center. They relocated to Heritage at College View in January 2021.

Asked about the secret of living a long life, Dale had to admit he didn’t always take the best care of himself.

Once a pack-a-day smoker, Dale kicked the habit many years ago.

“I decided if I was going to live to be an old man I’d better quit those doggone cigarettes,” he said.

Ruth said longevity runs on her side of the family, but added that being able to eat well through the years — even when times were tough— has been an advantage for her and her husband.

While their marriage has been a long and happy one, she and Dale said, they trusted their children to make their own life choices and are proud of the families they have raised.

“We never tried to steer any of our kids to a particular mate,” Dale said. “They were good at it.”

The years have brought a few challenges and near misses the Livgrens’ way. Even so, Dale and Ruth marvel at their blessings and the long lives they have been privileged to lead.

“It’s a lot of love,” Ruth said of what their diamond anniversary represents.

“To be married for 75 years … it’s a long road,” Dale said. “We just can’t be thankful enough to the good Lord to keep us alive for that long.”

“And together,” his wife added.