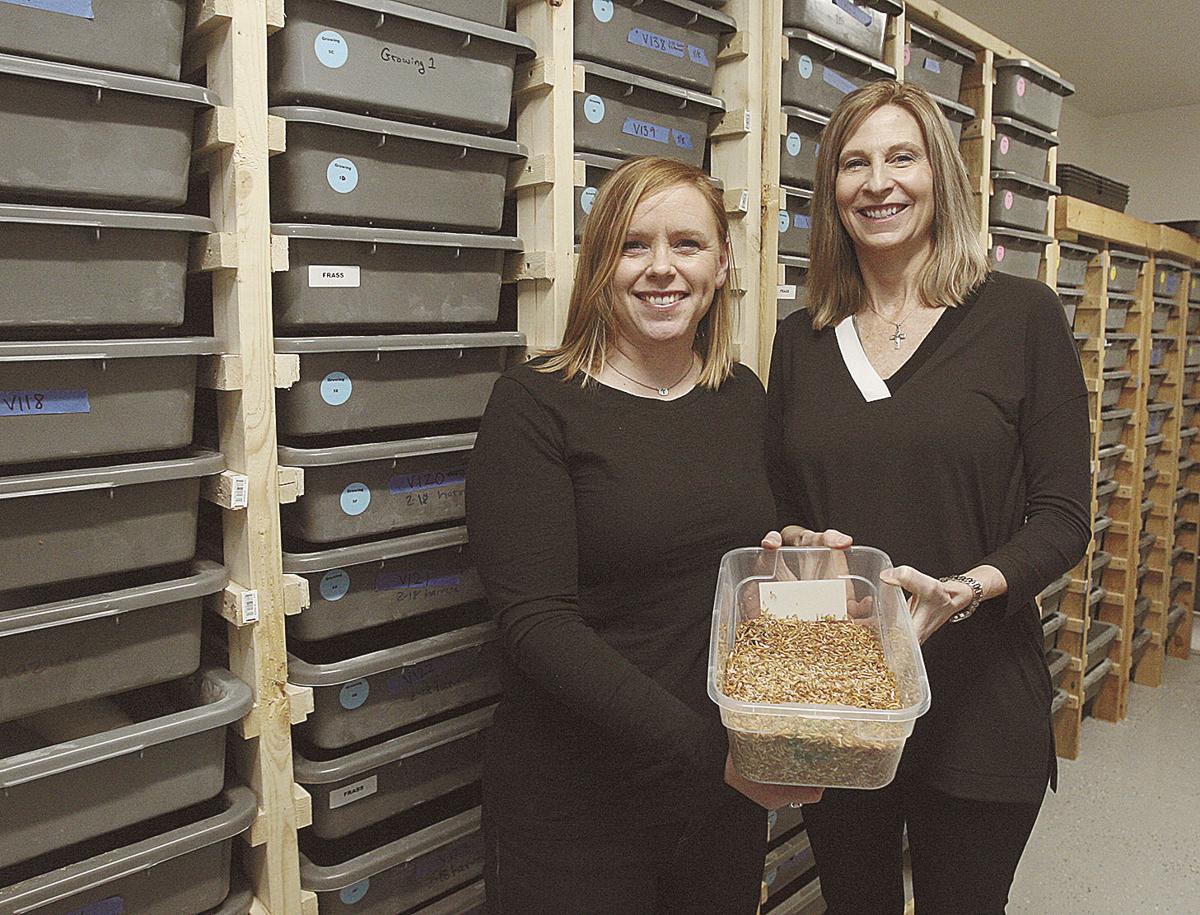 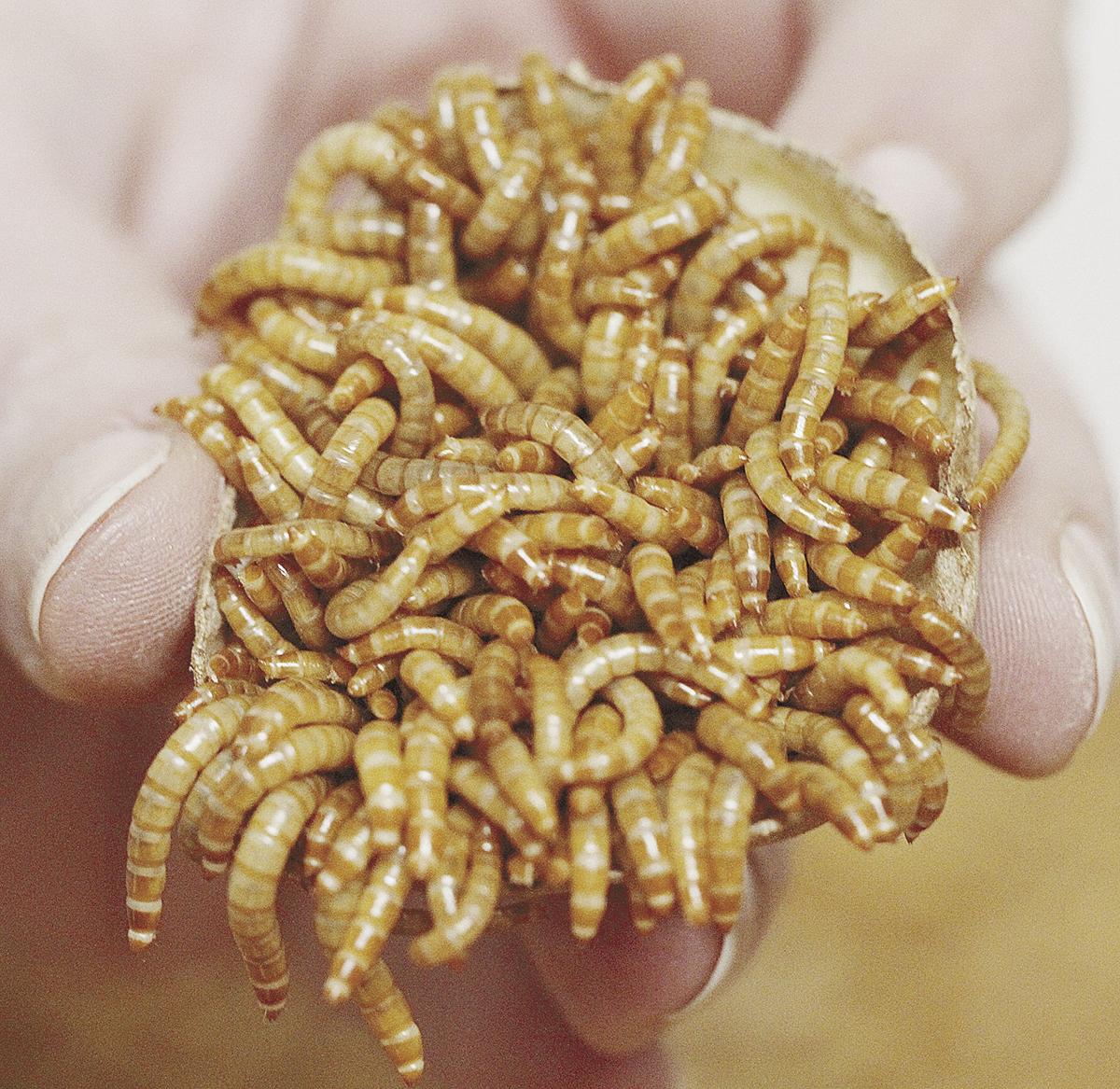 Mealworms feed on a potato in a production area at Kris Vrooman's property near Juniata. 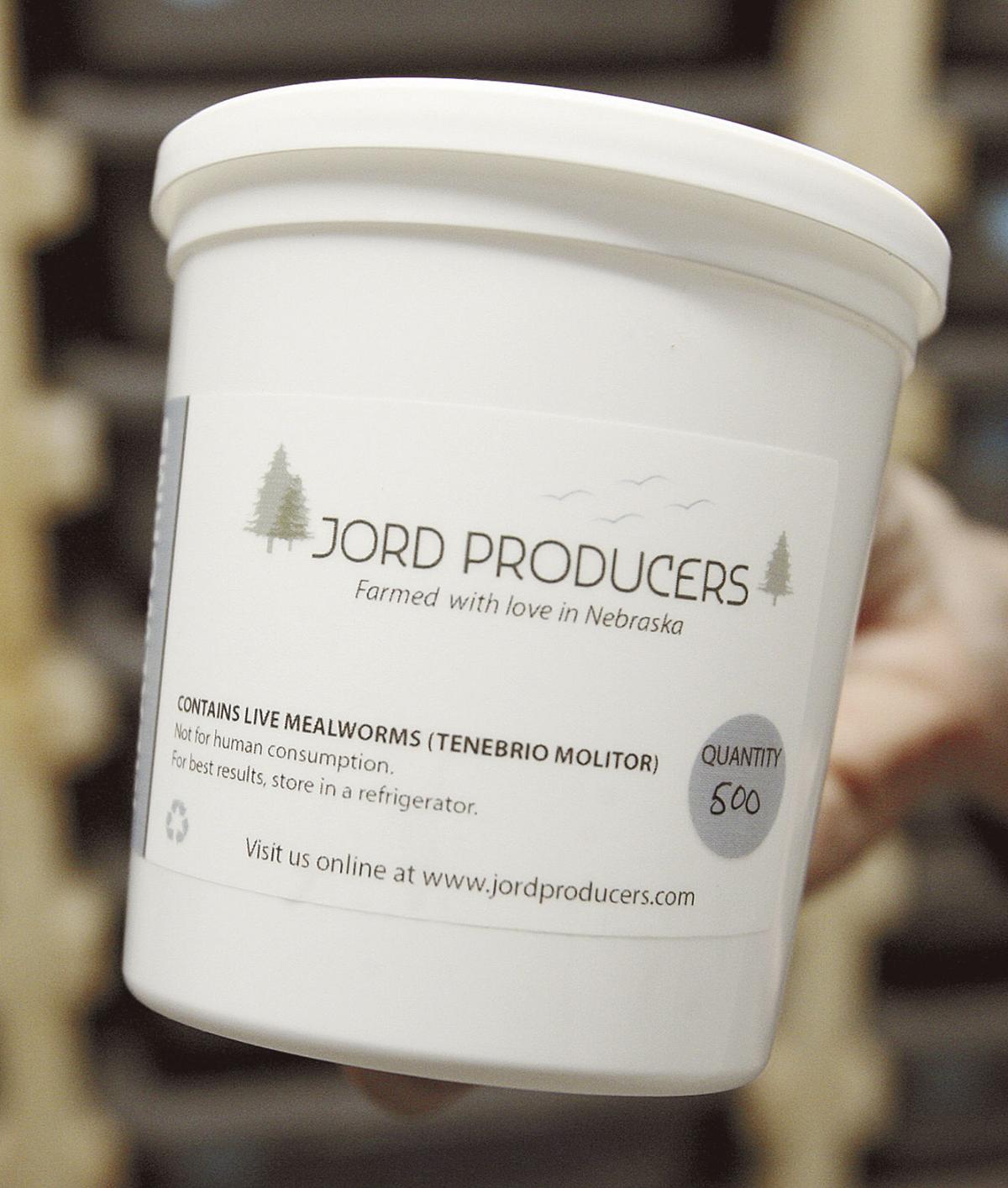 A shipping container for Jord Producers' mealworms is pictured in the production area at Kris Vrooman's property near Juniata. 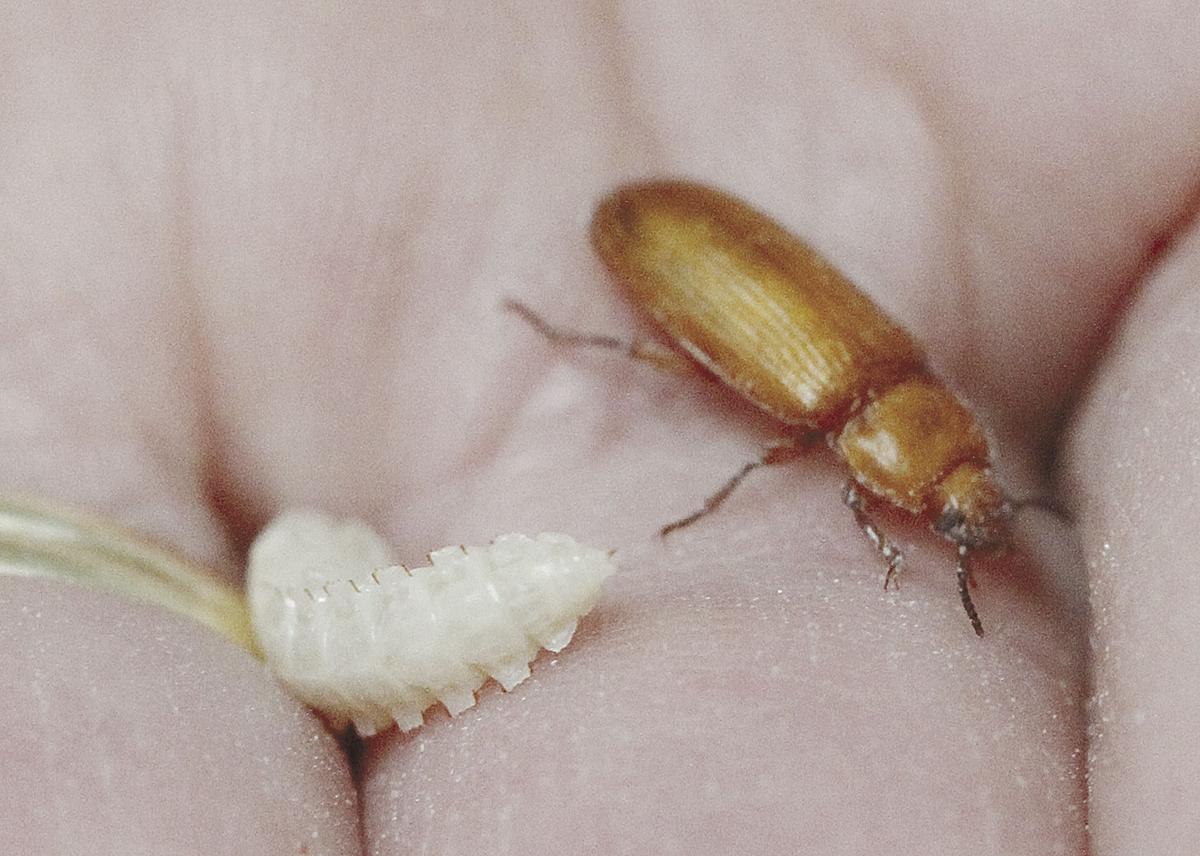 A mealworm in the pupa stage and a beetle are pictured in a production area for Jord Producers at Kris Vrooman's property near Juniata.

Cheryl Powers of Lincoln, Kris Vrooman of Juniata and Amber Klassen of Lindsay joined forces in 2018 after Powers applied for, and was accepted into, the University of Nebraska-Lincoln’s NMotion business startup accelerator for the mealworm production business. The team formalized a partnership with Powers’ existing business structure, Jord Producers.

She did more than 100 different customer discovery interviews with six different types of customer segments as part of NMotion.

“At the end of the academy they challenged us with a go- or no-go situation. ‘Is this company a go or no-go? Is there a market for it?’ It was definitely a go,” Vrooman said. “So that’s when we were like, ‘Let’s go.’ That was helpful to vet that out and give us a lot of confidence to invest our own funds into and scale back on our other commitments and focus on this.”

“We have very supportive husbands that helped us and prompted us even when we were trying to make a decision with buying the different rearing trays for the mealworms,” Powers said. “It’s like this is a pretty big investment and we want to do it. All three of our husbands said, ‘Just do it!’ That was nice to have that because they had heard us and they knew what the customer potential was. It’s just scary to write that check.”

Mealworms are currently available from Jord live as feeder insects in the exotic pet, bait and wild bird markets, but the company has plans in the next one to two years to offer dried and ground. The dried mealworms could be used as a food ingredient by product manufacturers such as Bugeater Foods in Lincoln.

The mealworms, which are about an inch in length, come from darkling beetles.

Vrooman currently has about 175 trays with beetles and mealworms in various stages of development in a climate-controlled room on her family’s property outside of Juniata.

Within those trays are about 8,000 beetles and 1 million mealworms.

The mealworms make a quiet sizzling sound as they slither over each other and consume food like wheat bran and dry distiller’s grains from nearby ethanol plants as well as vegetables such as potatoes for moisture.

At first, Vrooman was squeamish and reluctant to both handle and to eat the mealworms.

“It took only a day of working with them to get over it and to know how to best work with them to make sure I didn't squash them or worry about being too gentle with them,” she said.

Currently Vrooman saves about 900-1,000 pupae each week to become beetles, which have a six- to eight-week reproductive life. They are then harvested and fed to chickens as a live treat. The offspring of these beetles, larvae, are harvested at eight to 16 weeks of age prior to turning into pupae to start the process over again.

Vrooman anticipates having 50,000 beetles and 6 million mealworms once the Juniata site is at full capacity.

Klassen’s production site near Lindsay is about five times the size of Vrooman’s.

At full capacity the women anticipate producing 100 pounds of mealworms at the Juniata site and 500 pounds at the Lindsay site each week.

All three women had an interest in insect protein and alternative agriculture prior to forming Jord. Their biggest impetus, however, was what they saw as a tremendous market opportunity in this sector.

Vrooman, who owns her own grant-writing business, Innovative Grants, started to experiment raising mealworms on a very small scale about two years ago after helping Bugeater Foods in Lincoln, which uses insect protein to create human food, obtain a grant.

“They were already using cricket protein, and they were looking for a source for mealworms to incorporate into their food products,” Powers said.

In her capacity as a grant writer, Vrooman often finds herself excited about various business opportunities.

“When I write grants, I do a lot of market research for folks,” she said. “I get so excited about every project. So it’s really amazing I only have these two jobs.”

Powers previously had been talking to Bugeater.

“I was watching the insect agriculture industry to kind of see ‘Is this going to continue to go upward?’ ” she said. “It continues to grow upward each year. That was why I decided to get into this industry.”

Powers and Vrooman have known each other for 10 years. Vrooman previously helped Powers with a grant.

Powers asked Vrooman to come on board with the mealworm business. Vrooman agreed.

Powers reached out to the director of UNL’s Engler Agribusiness Entrepreneurship Program and asked for a recommendation for another woman who they thought would be a good fit. Klassen was recommended and agreed to come on board.

“We were kind of doing things a little independently, but yet we had kept the conversation flow the whole time,” Powers said.

The women initially were thinking about raising mealworms for the human food industry.

“We know that’s not for everyone,” Vrooman said.

They were shocked by all the different markets for insect protein.

There are 9 million pet lizards in the United States, Vrooman said.

“If the average 6-inch lizard eats 25-30 mealworms per week and we could capture 1 percent of that one market, it equates to $1.5 million revenue in one year,” she said. “That’s one market, and it’s probably not even our biggest market at this point.”

So far, birds have been the company’s biggest market.

As Jord continues to increase production, all of its inventory already is spoken for by customers who purchase the mealworms for up to $50 per pound.

“I have a list of people I’ve talked to who are interested,” Powers said. “They’ve been really wonderful to work with. They said, ‘When you’re ready let us know.’ ”

The company, which has a two-day shipping range, is growing intentionally and wants to make sure it is able to fulfill its customers’ needs.

Jord’s customers — mostly pet stores and convenience stores where the mealworms are sold as bait — have been patient and helpful.

The women of Jord have been surprised by the amount of demand and number of markets available for mealworms.

For instance, newly hatched lizards and young tarantulas eat small mealworms — “minis” — that are themselves newly hatched and just a few millimeters long.

“I have one guy who feeds his chickens mealworms and he’s like, ‘It’s like they’ll do somersaults. They see me coming with the mealworms, and they’re so excited,’ ” she said.

The mealworms, which have a high protein content, have an amino fatty acid profile similar to beef, she said.

It’s not just the mealworms that have a lot of earning potential. So does the mealworms’ waste, frass, which is beneficial as a fertilizer to protect plants against pests and disease.

Jord received a grant to do research with two Nebraska hops growers on the effectiveness of frass to combat downy mildew.

“We’re very excited about that because we have anecdotal stories about how adding frass to established plants — ‘oh my gosh, my cucumbers look so much better now,’ ” Vrooman said. “We’re really looking forward to having an official study.”

For every pound of mealworms, Jord collects a pound of frass created each week.

“We’re going to have a lot of frass that we need to make sure gets used well,” Vrooman said.

Powers said the world population is expected to be over 9 billion people by 2050.

“Farmers are going to have to find ways to produce 50 percent more food than they are producing now on the same amount of resources,” she said. “There’s a lot of interest in insects as human food because it has a very low resource requirement and can be grown in controlled-environment agricultural systems.”