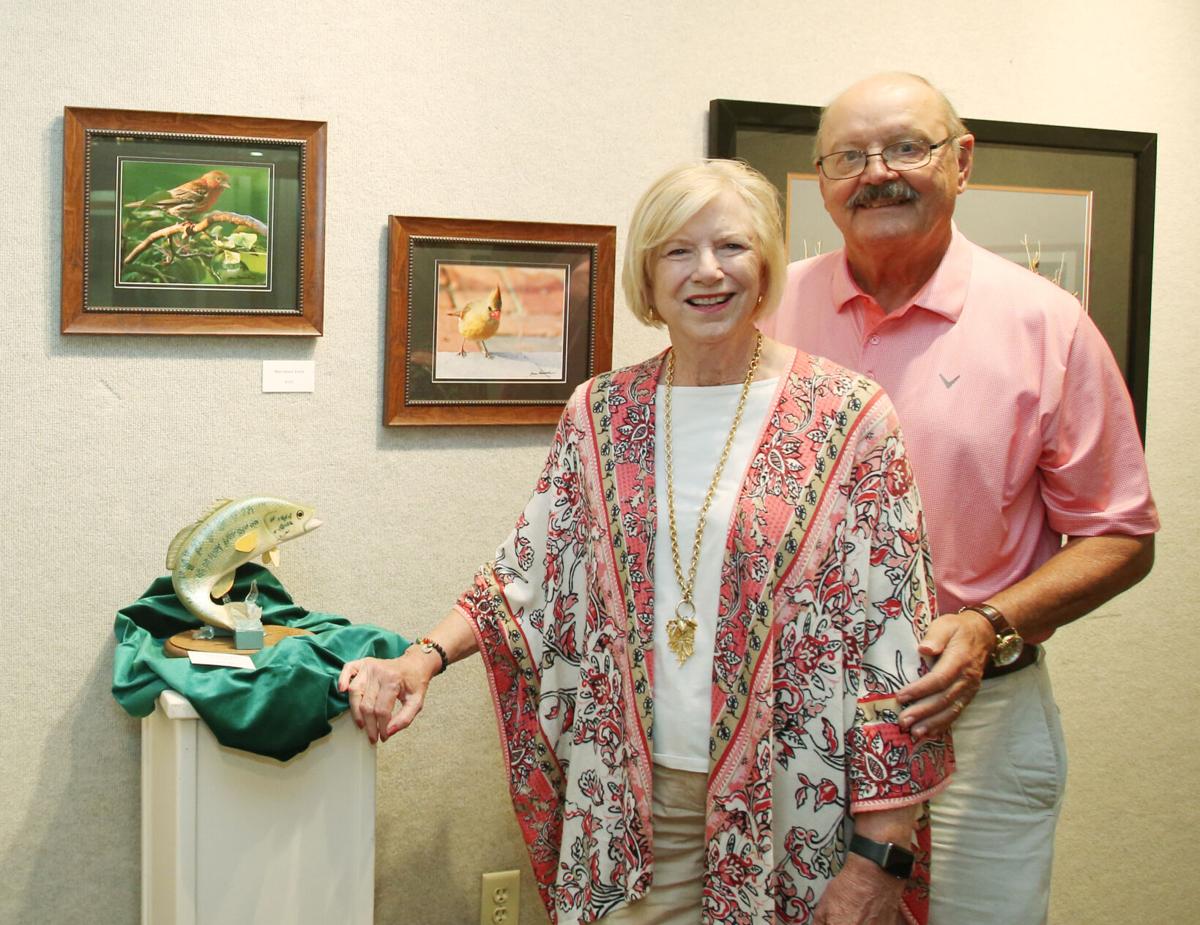 Jerri and Dee Haussler are pictured at the Minden Opera House Gallery with their artwork Sept. 16. Jerri’s photography and Dee’s wood carvings of fish are on exhibit in the gallery. 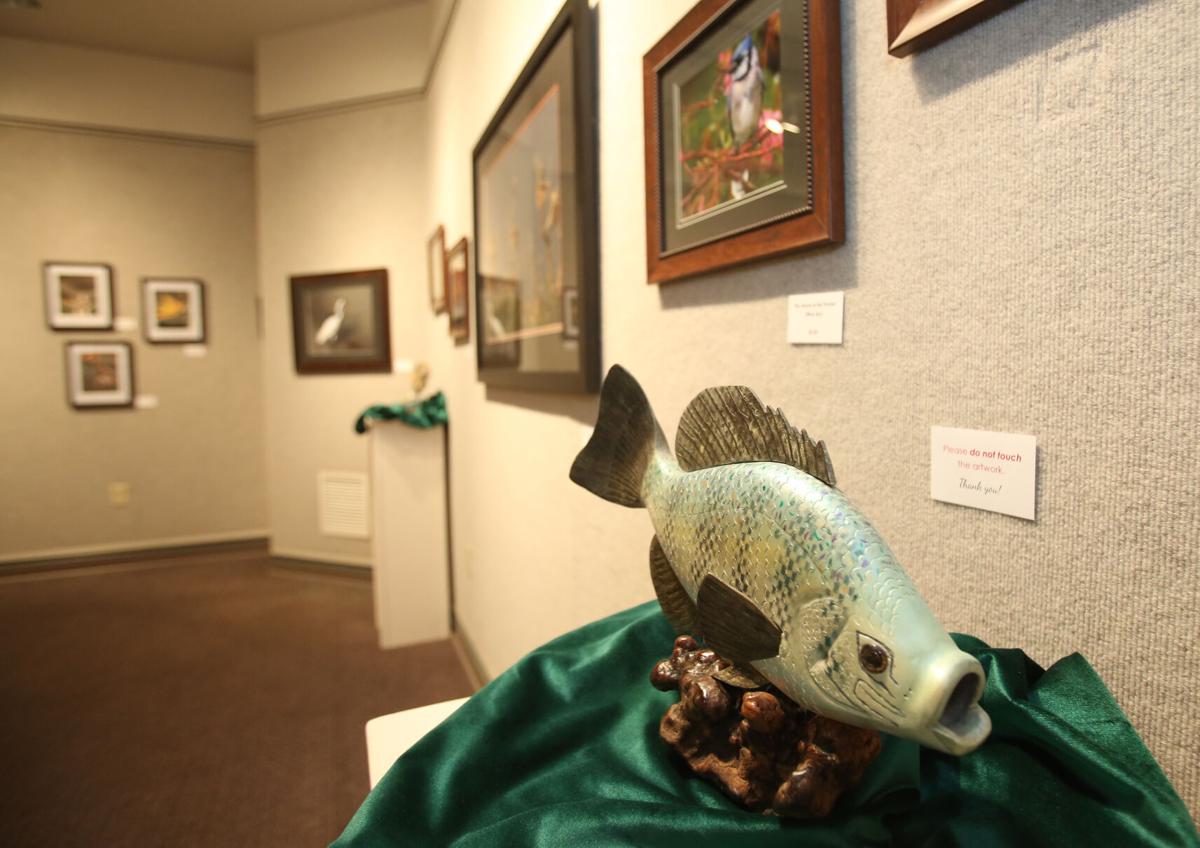 Dee Haussler’s wood carving of a crappie is on display at the Minden Opera House Gallery Thursday, September 16.

Jerri Haussler’s photography is on display at the Minden Opera House Thursday, September 16.

Jerri and Dee Haussler are pictured at the Minden Opera House Gallery with their artwork Sept. 16. Jerri’s photography and Dee’s wood carvings of fish are on exhibit in the gallery.

Dee Haussler’s wood carving of a crappie is on display at the Minden Opera House Gallery Thursday, September 16.

Jerri Haussler’s photography is on display at the Minden Opera House Thursday, September 16.

For Dee, former executive director of the Hastings Economic Development Corp., he was at breakfast with a group of friends a few years ago when Martin Petersen asked the ensemble if anyone wanted to learn about how he carved wooden fish sculptures.

“Nobody raised their hand except for me,” Dee said.

Jerri has been taking photos of the natural world for 65 years. She left her position as an administrator at Hastings College in 2002 to pursue her passions as a writer and photographer.

The Hastings’ couple’s joint show “Flowers, Fowl, and Fish, Butterflies and Bugs (Can You Find the Bugs?)” is on display at the Minden Opera House through October. The show includes a special insect photo exhibit for children in the Nied/Winther Room adjacent to the gallery.

The end of 2021 will mark 10 years since Dee retired. Boredom had begun to set in.

“I got into doing different things,” he said. “This is one of those things. This is the last two or three years that I’ve been doing that. Jerri likes it that I’m downstairs, out of her way.”

Dee took Petersen’s lead and dived headfirst into the intricacies of fins, gills and simulating movement.

“That’s quite a little bit different effort to cut those gills in,” he said. “It’s still not perfect.”

None of Dee’s fish are for sale.

“I’m the one that said they’re not for sale,” Jerri said. “They’re his first five fish. So I hate to lose them.”

Dee would consider offers, however.

Dee spends more time with each subsequent piece, now taking upward of 100 hours to complete one.

“To figure this thing value-wise it’s about a nickel an hour if I sold it,” he said.

Jerri placed a small antique camera near their artist statements in the Opera House gallery. She found it at an antique store.

“I thought that’s exactly what I remember getting for Christmas and opening it up before my folks said I could open it and then getting it back in the box so they wouldn’t know,” she said.

That was in the third grade. In the fifth grade, she read a nature photography book.

“It just made an impact,” she said.

She took a photography class in high school and did some developing in a darkroom.

“After that I’ve just always had a camera and had an eye for looking for things,” she said.

Jerri often goes on photography trips in a small recreational vehicle with her sister, Jodi Govig.

“I don’t think of myself as a professional photographer, but I have a lot of fun doing it,” she said. “I enjoy being out in nature.”

Dee is impressed with his wife’s work.

When it comes to the Minden Opera House show, Dee describes himself as a tag-along. It was Jerri’s idea to incorporate Dee’s fish carvings with her photos of flowers, birds and insects.

“I thought he’s got some really neat stuff that would go well with all of this,” Jerri said.

One of Dee’s fish on display is a large crappie. He had sent a photo of that carving to a friend.

“He said what size is that? I said it’s 15 ½ inches,” Dee said. “He said, ‘You know that’s a master angler?’ He said you ought to send that in to Game and Parks and get a master angler certificate. I said, ‘But it’s a carving.’ He said, ‘What?’ He thought it was a taxidermy.”

“Your whole effort is out of a block of wood to try and make it look like a fish,” he said. “It takes a lot of time to look at a picture and see, what I have is just a picture of it, and then you have to see a 3-D of it as well.”

It’s trying to see a fish in a block of wood.

“He keeps getting better and better,” Jerri said. “That one (a leaping large mouth bass), he had a vision because he was fishing and he had that happen. He had that in his mind that is what he wanted to do. Most of these are pretty flat. In that one he took two blocks of wood and glued them together and made it so it was a curve like it was jumping out of the water. Considering he’s only done five fish, starting on the sixth one, I think he’s really talented.”

In each of their cases, experience pays.