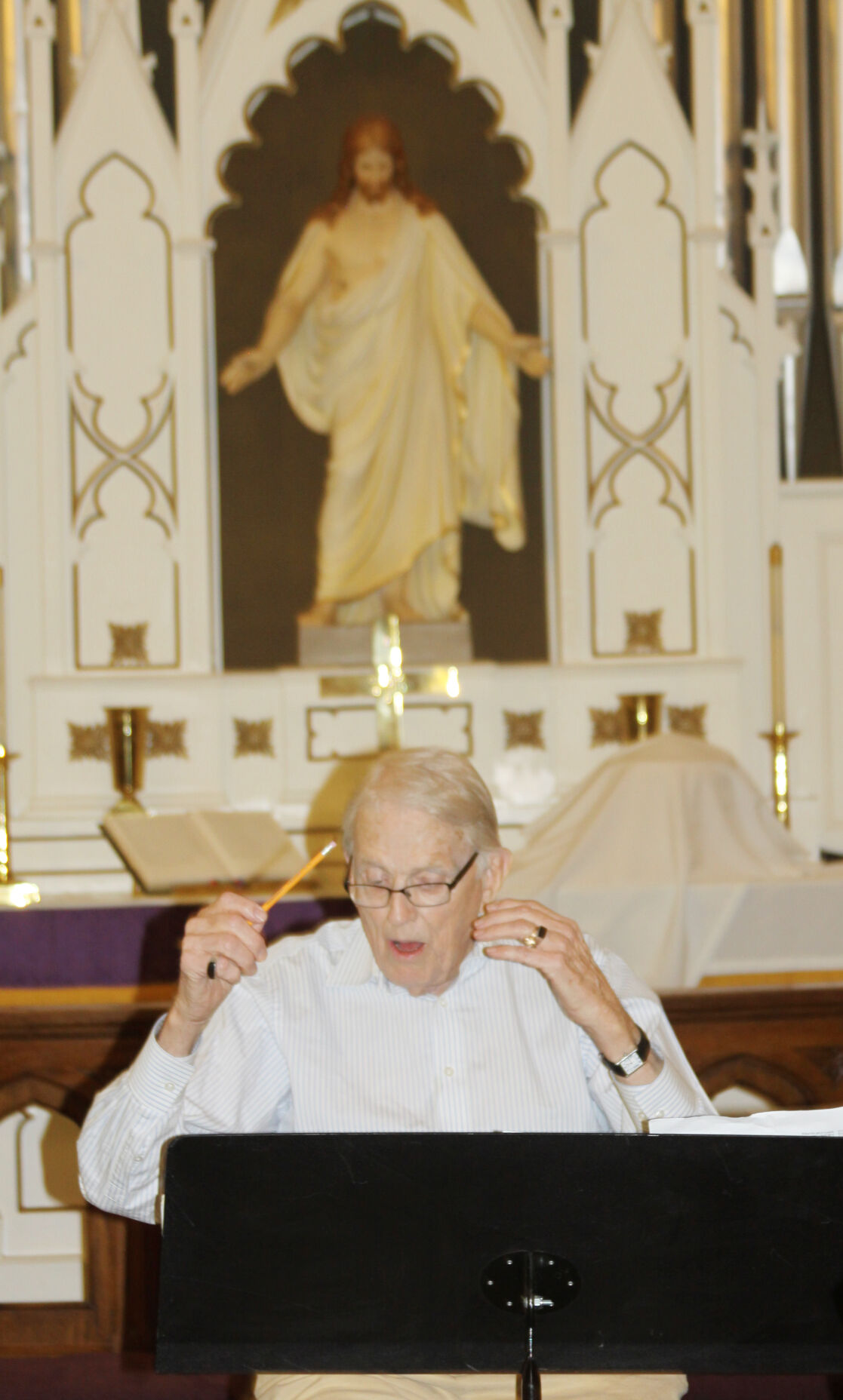 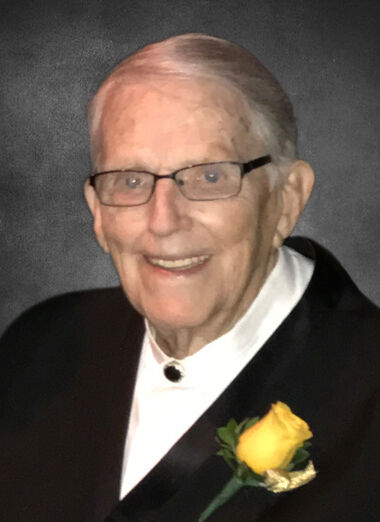 KEENE — Keene, Nebraska, is one of the world’s out-of-the-way places. A grain elevator, the lovely old Keene Evangelical Free Church, and a handful of homes are about the extent of the unincorporated village in western Kearney County.

J. Rodney Wendell lived in and around Keene for almost his entire life. He taught music in nearby Axtell, where he himself had graduated from high school, for 44 years.

He played the organ and piano in the Keene church for more than seven decades, keeping faith with the congregation to which his parents, Joseph and Vera Wendell, had belonged, also.

He and his wife, Delores, raised their three daughters in their Keene home where their neighbors included their pastor and his family. Most of their extended family, which includes seven grandchildren and several great-grandchildren, still lives in the Axtell area.

A gifted musician and educator, he didn’t stay because he didn’t have the talent to go most anywhere and do most anything with his career.

Rather, through his personal appreciation for music and his gift for teaching, he brought some of this world’s greatest and most beautiful wonders right into the heart of the communities he served, lifting the eyes of family members, friends, neighbors and students to the majesty of the arts and the goodness of God.

“I can’t begin to tell you how many people have reached out and shared how large of an impact he had had on their life through music,” said grandson Jon Anderson of Axtell, speaking in tribute to Wendell at the funeral service last Nov. 2 at the Kearney Evangelical Free Church.

His education career included stints in several area school districts but mostly was spent at Axtell, where he taught from 1950-94. He and Delores were married on June 12, 1952.

Through the years, the Wendells were active community members, serving in many capacities and seemingly never missing an Axtell ballgame, Jon Anderson said. Meanwhile, J. Rodney was building up the school’s vocal and instrumental music programs, playing and leading the choir at church, and teaching his children and then grandchildren to love music, serve the Lord and appreciate their Swedish heritage.

For edification, he and Delores traveled frequently to Omaha and even sometimes to Chicago for ballets, symphonies, plays and other arts events.

Glen Haselbarth of Minden, a fellow musician and longtime friend of the Wendells, said J. Rodney would get ideas on those trips for ways to optimize productions back home, then come back and look for ways to implement those ideas at school and in community events.

Whether it was the arrangement of the concert space, the condition of the choir robes, or even the colors used in the handbills publicizing the concert, Wendell had an opinion, paid attention, and went to great lengths to make sure his vision was achieved, Haselbarth said.

“He was a good organizer,” Haselbarth said. “That comes with being a detail person. He had in mind how he wanted things to be. He wasn’t a hard person to work with, but he just didn’t miss anything.”

In his tribute at the funeral, Anderson remembered his grandfather as a colorful personality who used many memorable lines to engage his grandchildren as well as his students and teach them the importance of presenting themselves well, especially in a performance setting, through their dress and demeanor.

“Big face, big eyes!” was one of his sayings. “Don’t forget to sparkle” was another.

Haselbarth, for his part, remembered Wendell reminding his choirs that “you are the face of the music.”

One of Wendell’s foremost accomplishments was instigating a community production of G.F. Handel’s oratorio “Messiah” back in 1958.

The project took hold and became a tradition that continued up to 2019, eventually under the auspices of a nonprofit organization called the Axtell Area Oratorio Society.

In the early years, the concerts were on Easter Sunday. Later, they moved to Palm Sunday evening. The venue also changed, eventually leaving the Axtell school for Kearney High School and eventually the Merryman Center for the Arts in Kearney.

The “Messiah” project included a chamber orchestra and several professional soloists, plus an all-volunteer choir of 70 or so singers representing several area communities and various church denominations.

Haselbarth, an area farmer and church musician who is a longtime “Messiah” choir member and has served as Oratorio Society president, said many of the singers got involved in the project after Wendell personally encouraged them to do so.

Except for Wendell’s invitation, he said, it’s likely many of those individuals — including farmers, teachers, businesspeople, homemakers and others with no professional involvement with music — never in their lives would have had the experience of singing with an orchestra, let alone helping raise Handel’s great work of art and devotion to the heavens. (The English-language oratorio was composed in 1741.)

Senja (Freeland) Stephens, one of Wendell’s long-ago students at Axtell, has gone on to her own long career teaching music in southern Nebraska schools. At Wendell’s invitation, she was a soloist in the “Messiah” concerts for over 30 years, singing the mezzo-soprano line.

In an online tribute to Wendell written at the time of his death, Stephens said Wendell had changed her life through his encouragement to pursue her musical gifts from the time she was a young girl.

“I wanted more than anything to be a teacher like him,” she said.

Haselbarth said Wendell’s personal charisma and dynamic directing style made “Messiah” rehearsals and performances memorable, and that many participants came back year after year out of loyalty and appreciation. Following Wendell’s death, the future of the concert tradition is uncertain, he said.

He recalled once seeing Wendell jump in the air, with both feet leaving the ground, to emphasize a point in the music.

The Rev. Matthew Snell, who was Wendell’s pastor, neighbor and close friend for 21 years and also became a regular in the “Messiah” choir, said Wendell encountered the oratorio — a musical retelling of salvation history from Old Testament prophecy through the Book of Revelation — not merely as a music maker, but as a devout Christian and a faithful student of the Bible.

“ ‘Messiah’ was Rod’s passion,” Snell said in his funeral sermon. “Why? Because it proclaimed the Good News of Jesus Christ from start to finish.”

Jon Anderson, the grandson, said in his funeral remarks that he had begun singing in “Messiah” in 2012.

He said he was amazed at how his grandfather put his whole heart, soul and mind into the work at hand, even in the latter years of his life when health challenges and advancing age posed challenges.

As the concert approached its climactic conclusion, Anderson said, the man from Keene, Nebraska, often would begin to weep over the universal, eternal power of the music and the message, which was so personal to him.

“It was incredible to see how much emotion he would pour into the performance and how he could tweak the most minute detail and it would enhance the song immensely,” Anderson said.

“As the Hallelujah Chorus would ignite, you could feel the chills run down your spine and the feeling as if there were angels singing from on high. Michelle (a cousin) and I both remember him saying the heavens were opening on the final Amen chorus — and we didn’t imagine it, we felt it.”