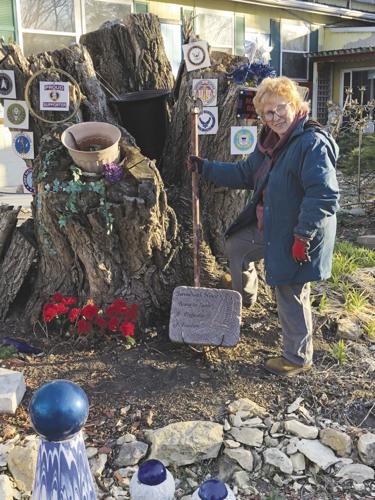 Harriett McFeely, founder of Hastings’ Bigfoot Crossroads of America Museum, stands April 8 next to a feature along the new handicapped-accessible walking trail behind the museum. 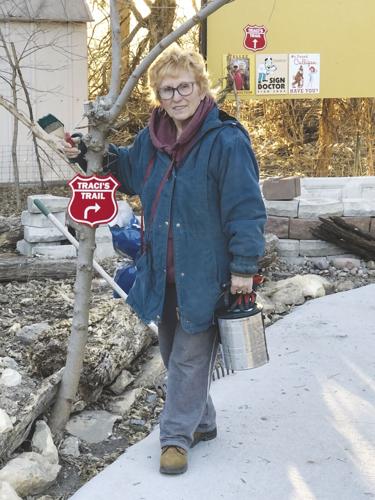 Harriett McFeely, founder of Hastings’ Bigfoot Crossroads of America Museum, stands April 8 next to a feature along the new handicapped-accessible walking trail behind the museum.

It took more than three years to grow, but the Bigfoot Handicap Garden planted by Harriett McFeely and cultivated by community support will open at 2 p.m. April 21 at 1205 E. 42nd St. behind the Bigfoot Crossroads of America Museum.

Situated on the roughly 2.5-acre lot, the hike-themed garden features a concrete wheelchair-friendly trail accented by props mimicking what one would expect to see on an actual Sasquatch walkabout, including nests, lookouts, “A” and “X” shaped structures, arches, teepees marking their stomping ground, a “killing field” littered with bones from the latest Bigfoot meal, and more.

Themed sections bear the names of friends and supporters who have helped McFeely realize her dream of running a Bigfoot Museum and hosting annual conferences locally. Visual elements include a serenity garden, nature mural, donor billboard, bonfire pit, Bigfoot statues, inspirational signage, and a storage shed model of the Iceberg ice cream shop run by McFeely’s parents, Harry and Murl Graham, in the 1930s and 1940s.

A military-themed tree display bearing symbols of the nation’s five military branches — Army, Navy, Air Force, Marines and Coast Guard — is included to honor veterans who wear or have worn the uniform honorably.

The token admission fee to the garden is waived for all veterans, many of whom have supported McFeely through attendance at her conferences and museum, she said.

McFeely said the idea for adding the Bigfoot garden to her museum footprint actually was inspired by a response from a conference questionnaire by a wheelchair-bound visitor who said she wanted to experience firsthand the thrill of tracking a Bigfoot in the woods.

“In her evaluation, she wrote, ‘I loved everything about the conference, the speakers, the vendors …but we want to go where you guys go,’ ” McFeely said. “ ‘We want to see what you see and hear what you hear, but the paths in the forest are not handicap-accessible.’

“When I read that, I felt sick because I thought, ‘How would I feel if I couldn’t go camping, or hiking, or even walking? It was just a terrible thought, and I couldn’t stop thinking about it.”

That was when her former business, Country Meadows, crept back into her thoughts. McFeely and her late husband, Dick, ran the one-stop wedding destination from their home for more than a decade during the early 2000s before a small tornado turned their backyard haven of lush trees and decorative waterfalls sideways in 2017.

“It (the tornado) completely 100% devastated this whole area that was for the weddings,” she said. “Everything but my little tiny gazebo. I don’t know how it survived.”

With no funds available to repair the damage, the wind-damaged yard — buried under at least five large uprooted trees, countless branches and rubble — sat untouched for more than two years.

That’s when a moving experience of a different kind cleared the way for McFeely’s garden vision to take root.

An anonymous group of Good Samaritans surprised her while she was away on vacation in the summer of 2019, clearing the unsightly mess away without fanfare. And with that, hope eventually would spring eternal.

“Boy, was that a surprise,” McFeely said. “The trees had all been cut up and hauled off. They had to have been lifted by a tractor because they were so big.

“To this day I don’t know who did it. I feel bad about that because I didn’t even thank them.”

Putting her vision to create a handicapped-accessible garden in motion, McFeely launched a low-key fundraising campaign through the museum, putting out the word and a cup for donations. Community response was underwhelming.

Three days later, a donor inquired how she could help further McFeely’s Bigfoot enterprise. With that, funding was suddenly available for the costly concrete path, which was poured on Jan. 4.

“Just like that!” she said. “I couldn’t believe it. I was stunned.”

McFeely will incorporate the gazebo from her tornado-ravaged Country Meadows garden into the fabric of her brightly colored handicap garden motif. It guards the walkway entrance alongside a statue of Bigfoot, serving as a symbol of survival and rebirth.

“This is definitely not a cemetery,” she said. “In the Bible, it says, ‘He made them all.’ I like that. That really tells the whole story.”