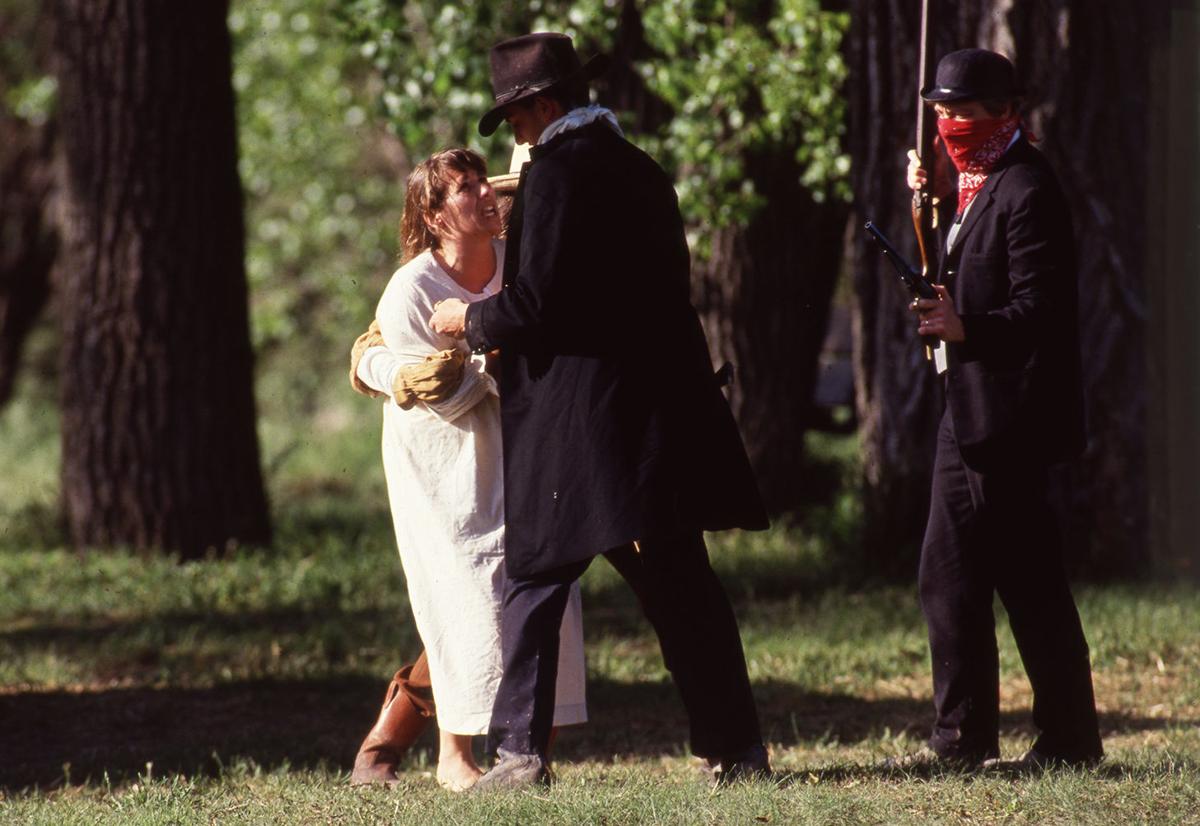 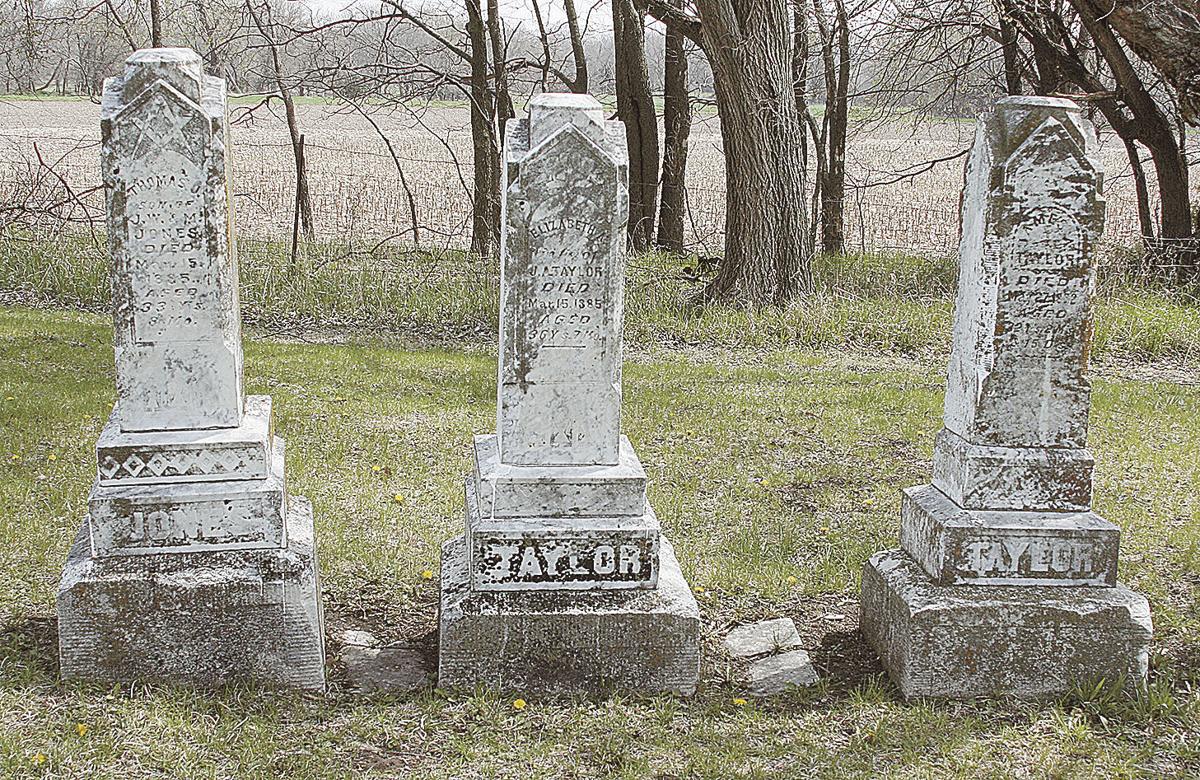 Three headstones in the small Spring Ranch Cemetery tell the story of siblings Tom Jones and Elizabeth Taylor who were lynched in 1885. That came two years after Taylor’s husband John died of mysterious circumstances.

SPRING RANCH — Driving along Nebraska Highway 74 near the west edge of Clay County, motorists will find a roadside historical marker telling the story of a community that once boasted a population of more than 100 people with shops, a school and a train stop.

Today, the remains of that old community include a few homes, a deteriorating depot building and some other signs of the past.

Spring Ranche, spelled with an “e” to differentiate it from an actual ranch, was founded in 1860 by James Bainter, the first permanent resident.

Floods, the lure of the big city and other causes led to the demise of the small community by the 1950s.

Yet the history of this small community is quite the story to tell.

James Bainter is the father of Spring Ranch.

In 1860, Bainter laid out the town site and built his home on the north side of the Little Blue River. He picked the spot because it was along the Oregon-California Trail and saw travelers passing by regularly.

He was responsible for operating a store and inn that was used heavily by the travelers heading west.

The first school lessons and church services in Clay County were offered in Bainter’s home.

It was just four short years later in August 1864 when a Cheyenne and Sioux raiding party destroyed the town and left several people dead.

Ten years later, the town was rebuilt. This time it was on the south side of the river where the Spring Ranch Cemetery is located.

The town moved back north two years later when the St. Joseph and Grand Island Railroad was built through the area.

The town of Spring Ranch was never incorporated, and a mayor was never elected. However, the state’s second post office was built in Spring Ranch in 1870.

The first bank opened in 1910 and closed in 1926. The remains of the bank vault still can be seen today as an old red brick structure.

The Peck and Meston Grist Mill was built on the banks of the Little Blue River in August 1874. The residents of Spring Ranch voted 59-54 to pass a bond for construction of the mill.

Reports state that people traveled 50-100 miles to have their grain ground into meal at the Spring Ranch mill.

At its height, Spring Ranch had a population of 125 people. There were two grocery stores, a community band, a general store and plenty of activity.

In 1992, Paus shared some of the history of the community.

“The railroad also had an impact on Spring Ranch and brought a lot of people here, especially in the 1920s,” he said at that time. “Then we had the Dust Bowl years of the 1930s, and in 1940 the railroad moved out of Spring Ranch.”

Paus attributed the start of the community’s decline to loss of the railroad. The Spring Ranch School closed in 1958.

In addition to the loss of the railroad, the location of the community was a detriment in some eyes. Floods on the Little Blue every few years would cause mass destruction, forcing some people to pack up and move away.

A story for the ages

Research into this small community includes piles of stories about one black mark in the town’s history that came in 1885.

It’s the story of a group of vigilantes who took a woman and her brother from their home in the middle of the night and hanged them from a bridge a few miles from town.

There is much more to this story, however — much that likely will never be verified.

Elizabeth Taylor and her husband James came to the area and filed for land in April 1872, about the same time some of Elizabeth’s kin, including her brother Tom Jones, also came to the area.

There are stories that Elizabeth wasn’t always happy with her husband’s financial dealings and slowly began to take over more and more control of the farm and its finances.

There are even reports that at one point James deeded all his real and personal property over to his wife. This didn’t sit well with the men of Spring Ranch, especially those who owed the Taylors money.

A few years later, James died of what people at the time said was Elizabeth’s killing him with potato bug poison. A modern-day nurse has said she believes James had the signs of complications from diabetes.

Elizabeth eventually turned over some of her duties with the farm to her brother and other partners.

At the time, Elizabeth was considered a prize among unwed women in the area and men were lining up to court her. This upset the other women in the community, especially after Elizabeth allegedly turned down the proposal of bachelor Rees Rees.

There are accounts that her teenage sons were involved in the murder of a local man that led to her untimely death. There were other rumors, as well, that her brother had raped a young girl who became pregnant.

No matter what the charges, the story of these two siblings came to an end in the early morning hours of March 15, 1885, when vigilantes — whose numbers are estimated from 15 to 50 — dragged Taylor and Jones out of their beds and into an open field.

There, Taylor and Jones were accused of cattle rustling and land grabbing, among other things. One of the alleged vigilantes was Rees, who may have had other reasons to be upset with Taylor.

According to accounts, the two were beaten until Taylor confessed to hiring someone to burn a barn of someone she was in dispute with. She denied the other accusations.

The siblings were hanged from a bridge near the present-day Manna Resort.

Elizabeth, 36, and Tom, 33, were buried in the Spring Ranch Cemetery, with Elizabeth interred next to her husband who had died three years earlier. Their stone grave markers still stand today.

Eight of the vigilantes were arrested later for the lynching, but Sutton Judge E.P. Burnett ruled there was insufficient evidence to convict them. According to records, none of the accused were Spring Ranch residents.

Throughout the years, descendants of those early Spring Ranch residents and current residents have worked to preserve the history of the once thriving community.

In September 1972 members of the Spring Ranch Homemakers Extension Club dedicated a large marker in the Spring Ranch Cemetery. It was erected to commemorate the community’s history from 1870 to 1970.

“To Honor the Spring Ranch Community,” it states. “They labored hard, the yrs have passed. We see the efforts of their toil.”

Around that same time, the Fairfield Minute Milkers 4-H Club made wooden signs that were placed throughout the community marking where buildings had once stood.

A few of the signs that still stand are so weathered that they are no longer readable. The ones that do stand are a bit of history in their own right, having stood for 45 years.

The people of Clay County came together in May 1993 not only to celebrate the 150th anniversary of the Oregon Trail, but also the history of the community of Spring Ranch that had been started because of its proximity to that busy pioneer highway.

An estimated 6,200 people turned out for the Spring Ranche River Festival, which focused primarily on a re-enactment of the Taylor/Jones hangings of 1885.

Re-enactors that day brought back to life pioneer activities including cooking over an open fire and children’s games including finding a plastic orange needle in a haystack.

Today there are still a few occupied homes in the Spring Ranch community. The old hotel building had been collapsed in a pile for years; the depot building continues to deteriorate; and the signs marking the town still stand.

What the future of the area holds, no one knows. But the history will always remain.

Editor’s note: Principal sources for this article include “Heroes Without Medals: A Pioneer History of Kearney County, Nebraska” by Roy T. Ban…