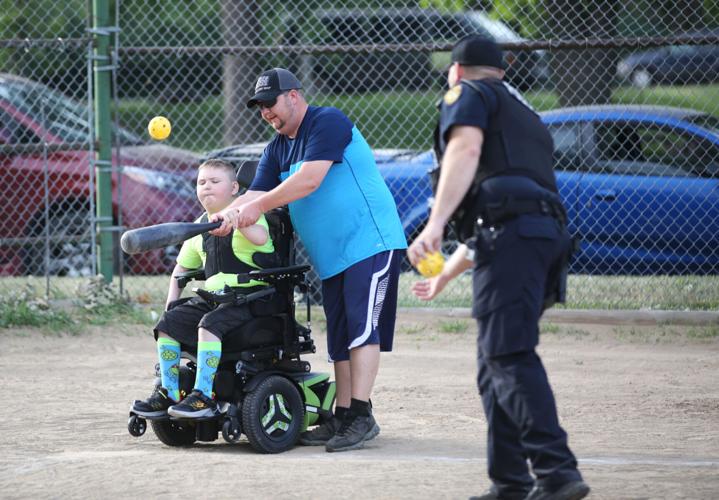 Bambino baseball player Carter Rodgers gets a hit with help from his dad, Aaron, during a game against the Hastings Police Department Wednesday during a game at Crosier Park. 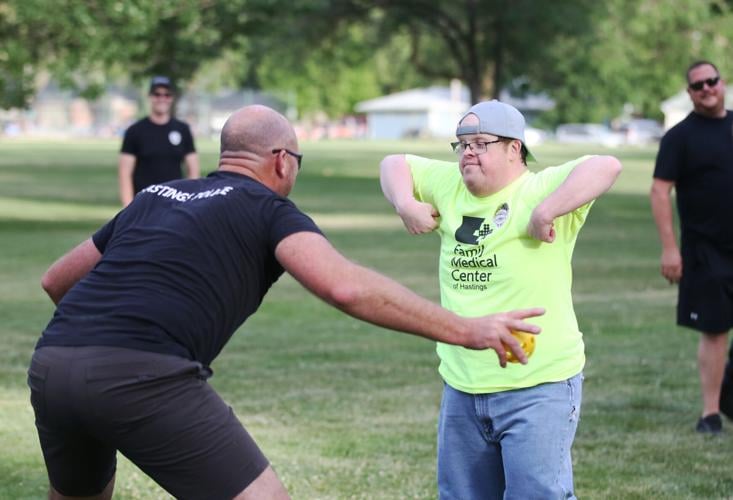 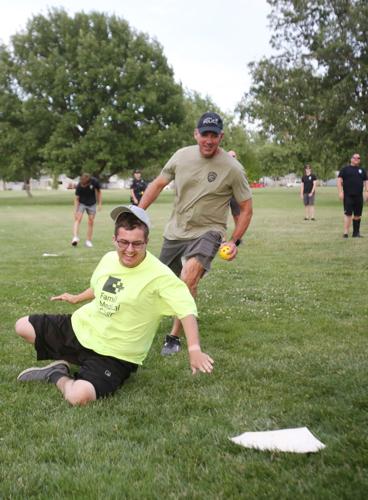 Bambino baseball player Carter Rodgers gets a hit with help from his dad, Aaron, during a game against the Hastings Police Department Wednesday during a game at Crosier Park.

C heers and jeers echoed through Crosier Park as the special-needs members of the Bambino League played ball with officers of the Hastings Police Department June 22.

Officers cheered and high-fived the Bambinos, divided into three groups to play kickball or baseball with a plastic bat and ball. No one kept score during the games with the goal being to have fun with one another.

HPD Sgt. Jason Haase joked with several Bambinos throughout — and between — the games. Some teased him as a chicken, and he flapped his arms like he had a pair of wings.

Joking with the players was important to Haase as he considered his niece with special needs.

Hasse was among 14 officers who came out to the event — nearly half the department. Some couldn’t be there because they were on duty.

The HPD first played with the Bambino League in 2018. The two groups weren’t able to meet for the last two years due to the pandemic.

Hasse said the outreach effort received a positive response from officers in the department.

“We absolutely wanted to do this,” he said. “This is one of them the guys look forward to.”

And the officers aren’t the only ones looking forward to the matchup.

Bambino head coach Dick Urwin said the interaction is uplifting to the players, who range in age from 6-77. He said the games are set up to allow everyone to participate, no matter the special need.

“Everybody is included,” he said. “Nobody is left out.”

Restarting the league after the pandemic, Urwin wasn’t sure how many people would attend. He was hoping for 30, but nearly double that estimate attended at 55.

One player, Logan Partridge of Hastings, was more than happy to come out and play ball with the police. He knew some of the officers from his time at Hastings High School.

He has participated in the Bambino League the last six years and is active in Special Olympics, participating in track, bowling, volleyball and basketball.

“I love it,” he said. “People are getting more exercise.”

Ryan Burns of Hastings brought his daughter Heidi to the event. He thanked the officers for taking the extra time to interact with the Bambinos, inside the game or when meeting them on the street.

“This is just something very special,” he said. “It’s very much appreciated by every single family that sits here.”