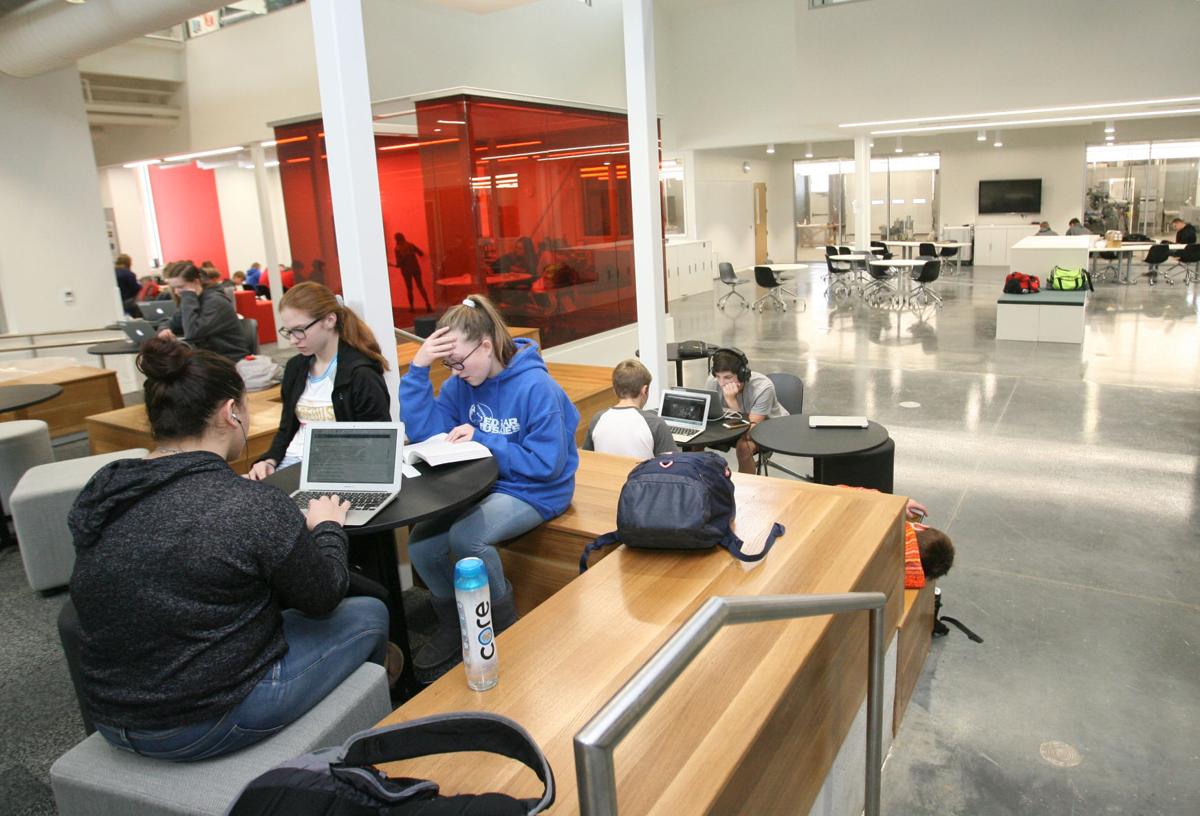 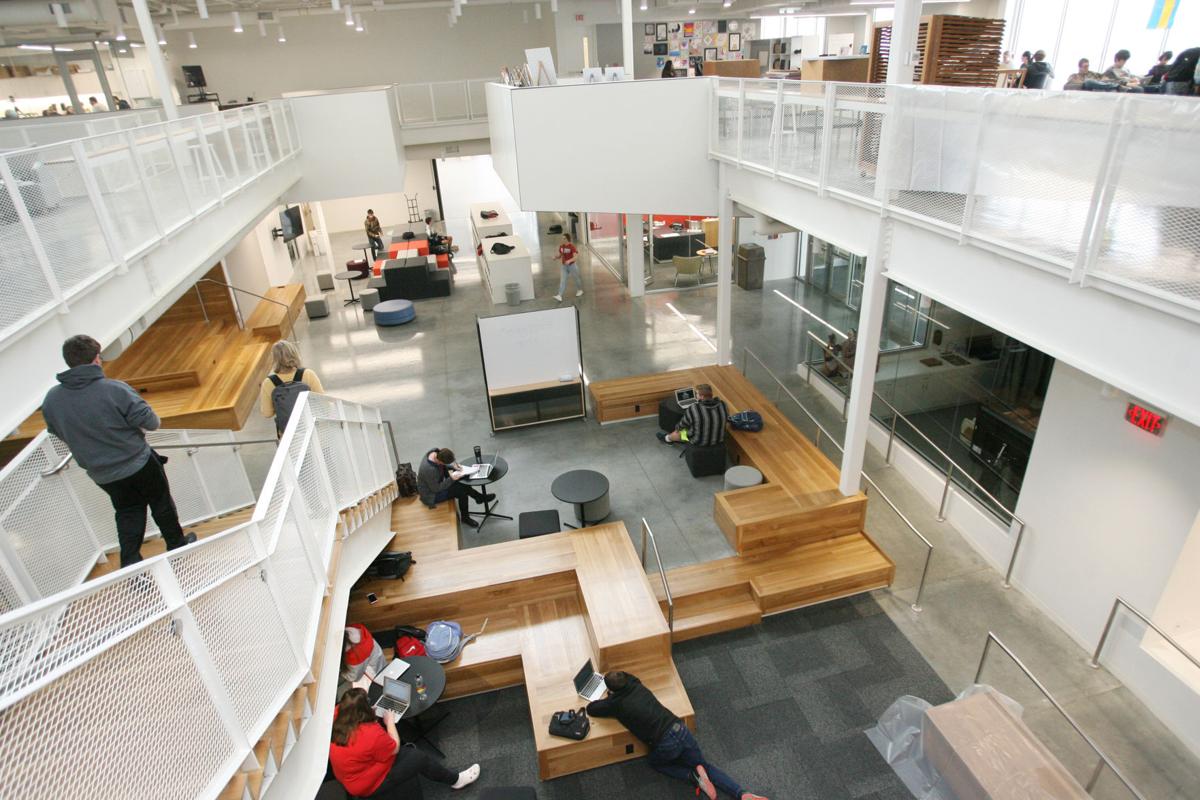 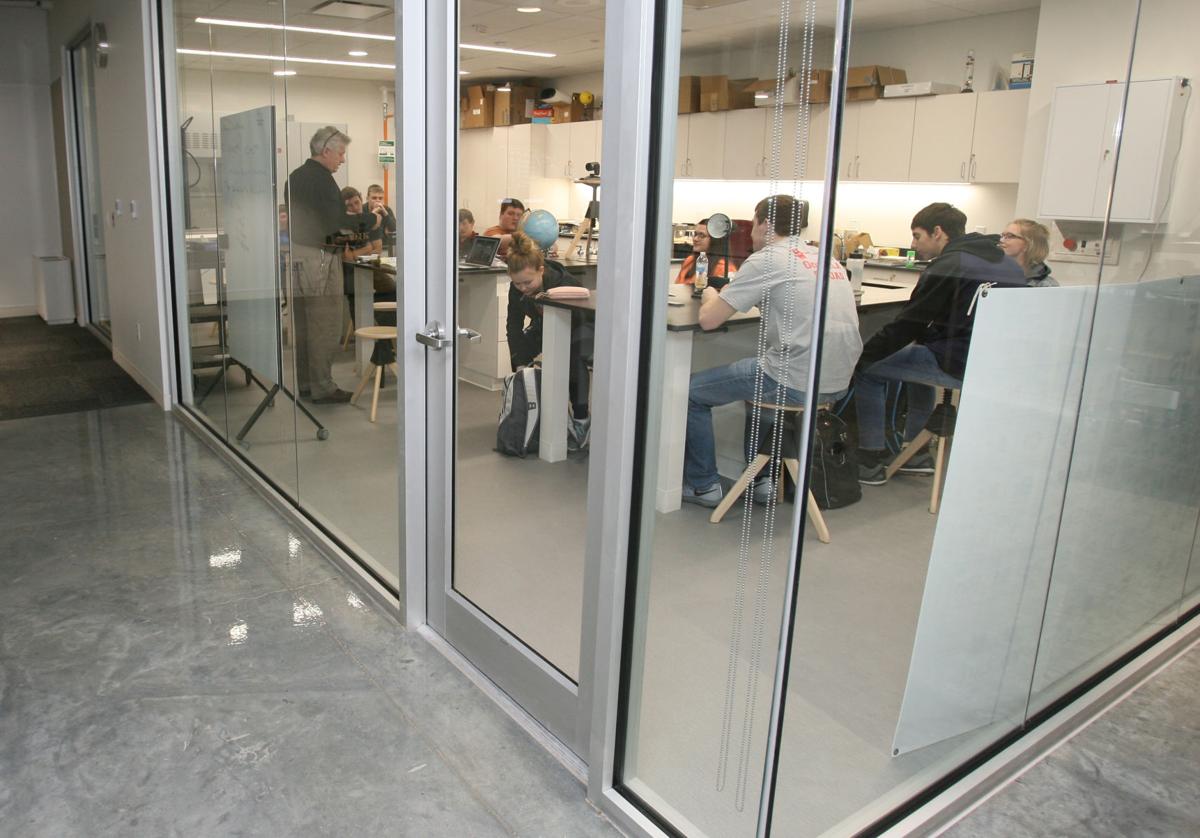 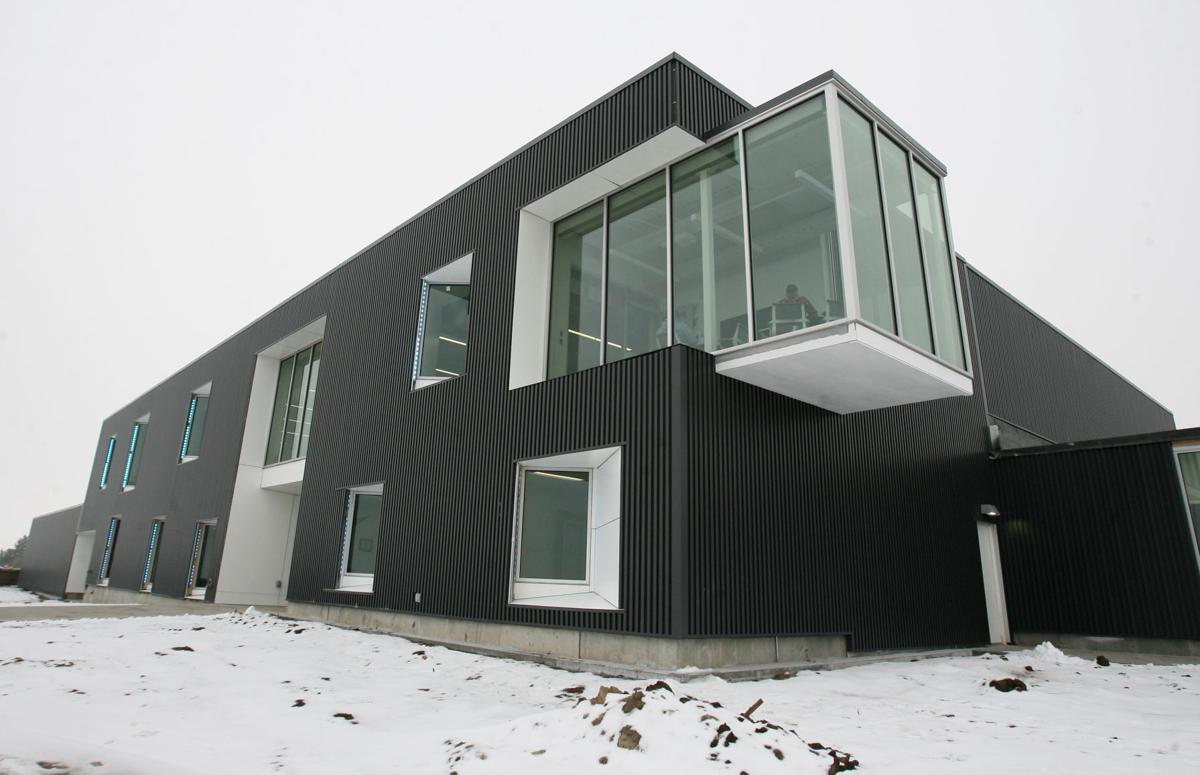 In one area, students are sitting on benches, leaning on backpacks and laying on the floor to take a standardized test.

No more than 10 steps away, another class is sitting in an open classroom listening to a biology lecture and on the other side of a wall another group of students is having a business discussion.

The new Nebraska Center for Advanced Professional Studies or NCAPS center at Sandy Creek Junior/Senior High School is unlike any other high school setup to be found in central Nebraska.

“When we were envisioning this building and what it could look like, we started from scratch cause we could,” said Amanda Skalka, the director of curriculum and assessment. “We worked with architects for months on this, asking ‘What is our why,’ before we even saw a model.”

What came from that discussion was a two-story high school career center complex with open rooms, few walls and only a few enclosed classrooms with walls and doors that serve as labs for specific areas.

The idea is the open spaces give more opportunity for collaboration and merging of topics and classes to meet all a students educational requirements.

So students may learn a math concept through the eyes of manufacturing or tackle a topic like the Holocaust through both social studies and English classes.

In this new setting, which opened to students Jan. 7, students still have a block schedule as is common in most high schools and move classes to the sound of a bell.

However, those classes look a little different as they might be meeting in small groups or have more student driven discussion than the traditional lecture style classes that Skalka referred to as the “sage on the stage.”

“Of course it’s appropriate to have some lecture but we don’t want that to be the majority of the instruction,” Skalka said. “We want the kids to be doing.”

The idea for a new high school building to meet the concepts the district has been adopting for years came partly by way of Mother Nature.

“Going back two and a half years, there was a little tornado that I think gave the nudge,” said high school principal Jason Searle.

In May 2016, a small tornado hit the southern edge of the school tearing apart an awning and causing some roof damage. From there, the district and school board really had to decide if they make repairs or go ahead with their dream of a major overhaul of the school.

The new facility was built in the middle of the former building with the original industrial arts and construction areas on the south end and the cafeteria connecting the new part to the southern end of the rest of the building which houses the elementary and middle schools.

In the open areas are classrooms for science and business along with gathering areas where on Wednesday one group of students were taking a standardized test and another was sitting on the stairs in front of a large screen watching a video for another class.

“Even though I can faintly hear what is going on, it’s not disruptive to the other spaces,” Searle said of the students watching the video.

On the second floor, there is an enclosed science lab, two enclosed meeting rooms and the enclosed 3-D art center.

All the other areas are open with no walls including the social studies, Spanish, 2-D art and the media computer lab.

All of the enclosed classrooms have glass walls so even those areas appear open in the large airy space.

Additionally there are smaller gathering areas with comfy chairs, stools and high counters and tables with chairs.

“Maybe the first half or three-fourths of class will be instruction and then they’re going to work independently,” Searle said. “There’s always a lot of movement as well.”

And all of the open spaces allow for a lot more collaboration.

Teachers are able to see what their colleagues are doing so they can get ideas. And with the open space, there’s more room to bring classes together or do things together that in the past would have all been done separately in classrooms down a hallway.

“There’s more opportunity for crossing each others paths and seeing what they’re doing and connecting students and teachers,” Skalka said. “We’ll be able to integrate more and more.”

Much of what Sandy Creek does with their students is preparing them for the future by helping them discover what careers they may or may not find interesting.

For years, the district has had articulated classes with Central Community College that gives students dual credits.

Many of the high school teachers are actually certified to teach classes that give the students the ability to get college credit for these high school classes when they move onto either a two- or four-year college.

Skalka said with the manufacturing, construction, nursing and other programs, many people assume NCAPS is only for students who want to go into two-year college programs after high school. That, she said, just isn’t true.

“People keep saying, ‘You’re just pushing two year colleges,’ and career trends tell you that’s where the jobs are going to be but we are supporting students no matter where they want to go,” she said.

They work to prepare students for two- and four-year programs, the military and for going straight into the workforce after high school.

“They can go straight into the workforce especially with that nursing and make a heck of a lot of money,” said Julie Otero, superintendent of South Central Unified District which includes Sandy Creek and Lawrence-Nelson schools.

Skalka said most schools should or are offering dual credit. Sometimes that may be through distance learning and while Sandy Creek does have some of that, most of those classes are with teachers on site.

Otero said the district plans to market some of the specialized programs like the nursing, manufacturing and construction to other area schools.

“Not every high school around here can afford to have these career pathways,” she said. “We want to be a regional hub where students can come if they’re interested in a certain area.”

With the manufacturing and construction programs, students who take the classes all four semesters juniors and senior year can walk away with up to four certificates that will transfer to two- and four-year educational institutions. Students can also become a certified nursing assistant after one semester of work at NCAPS.

“We offer that class in the spring so those students would be eligible to go work in a care facility,” Searle said. “They would have a better paying job in the summer while they’re still in high school.”

As part of the NCAPS program, each junior and senior also gets a mentor from the business world in the area. Those two meet for 12 hours throughout the semester giving the student knowledge and sometimes experience in a certain field.

At the end of the semester, the student makes a 20 minute presentation on the experience to underclassmen, administrators, teachers and business mentors about their experiences.

From this program, Searle said they’ve had students find their passion and pursue it in college, while others have bounced through two, three or even four different programs in their four years.

The key, she said, is finding a student’s passion.

“Kids aren’t just here to put in there time,” she said. “They’re here to find out what their passion is.”

She said statistically, students start to lose their passion for learning after their sophomore year. The goal at NCAPS is to buck that trend by engaging all students.

“We as adults have got to change something,” she said. “What can we do to help them keep their passion for learning rather than it going away. That is our goal.”