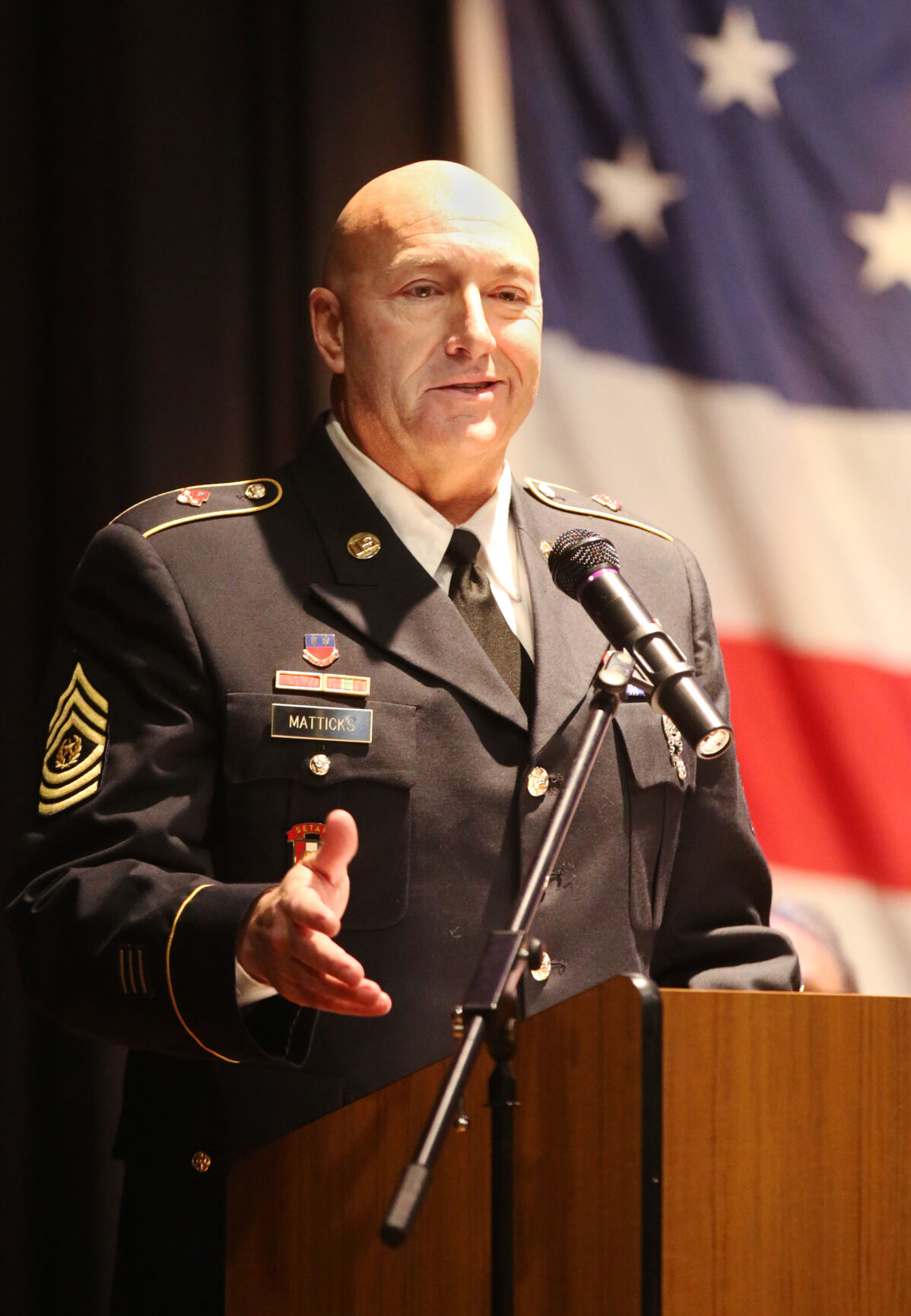 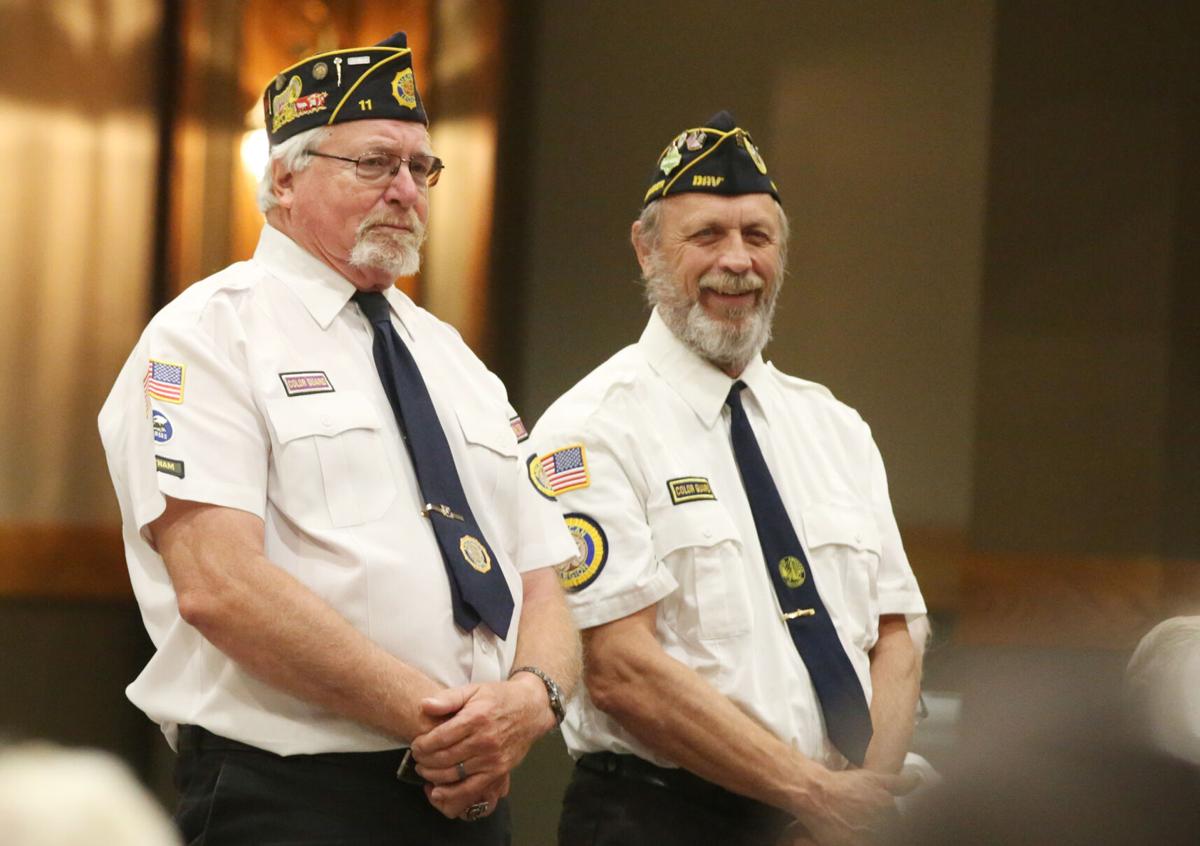 Greg Powell (left) and Dick LeBeau stand to be recognized during the patriotic medley at the Veterans Day service Thursday morning at the Hastings City Auditorium. 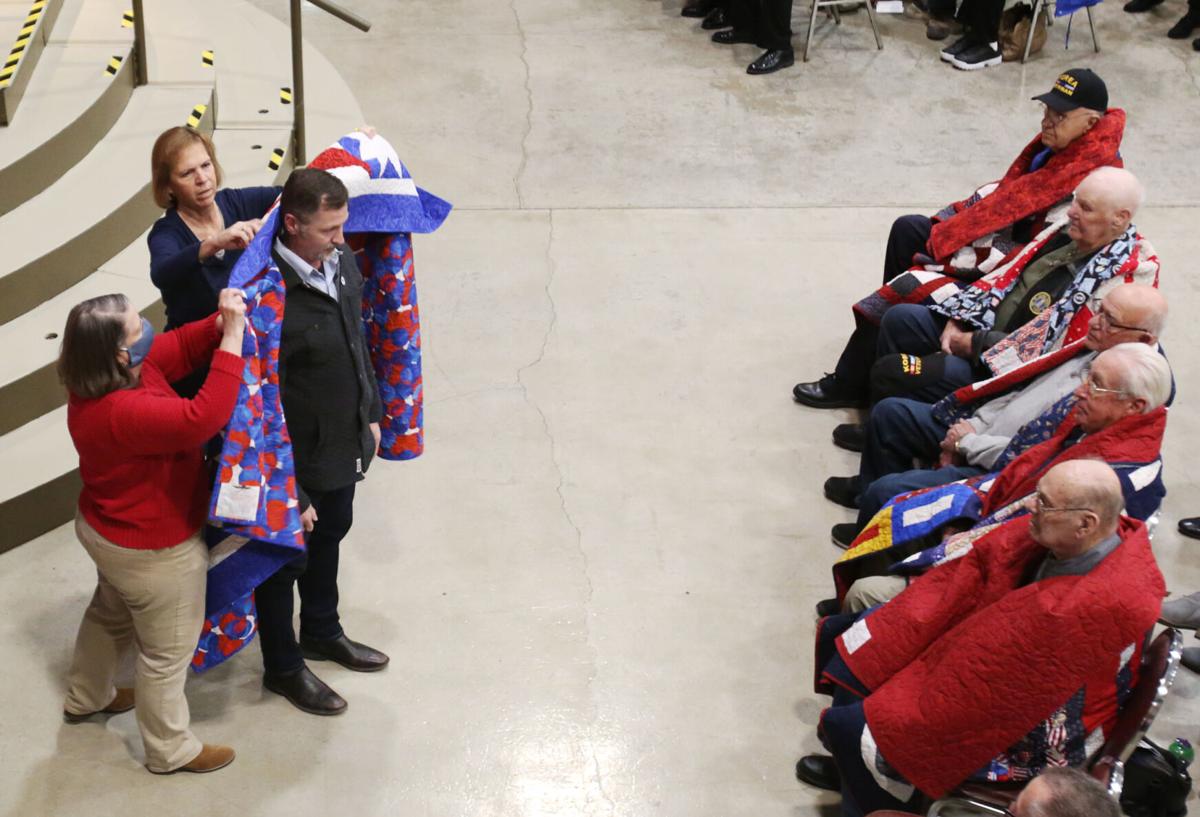 Timothy Cass, along with eight other veterans, received Quilts of Valor Thursday during the Veterans Day service at the Hastings City Auditorium. 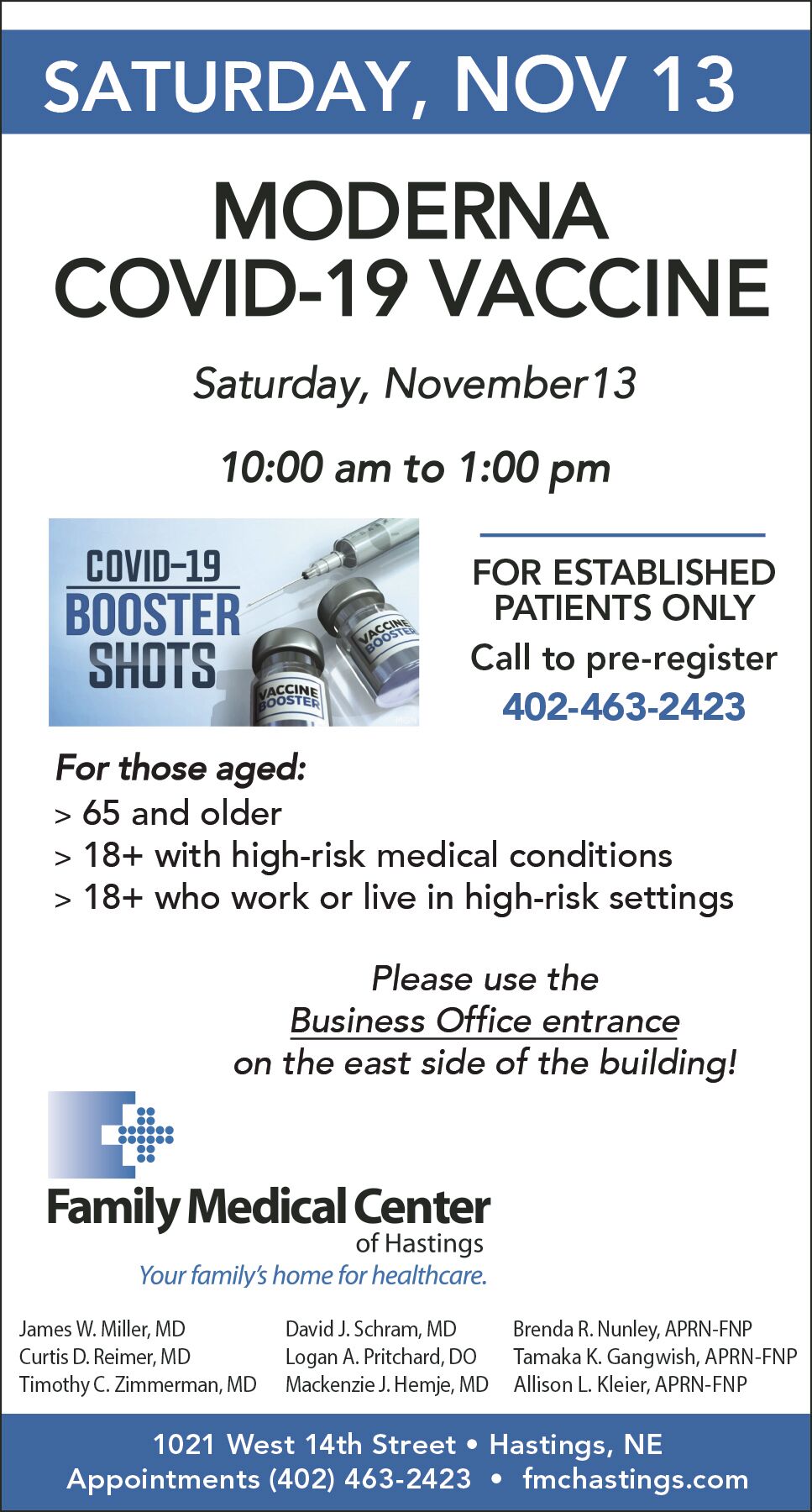 Greg Powell (left) and Dick LeBeau stand to be recognized during the patriotic medley at the Veterans Day service Thursday morning at the Hastings City Auditorium.

Timothy Cass, along with eight other veterans, received Quilts of Valor Thursday during the Veterans Day service at the Hastings City Auditorium.

W hat are we fighting for?

Command Sgt. Maj. Rick Matticks of Hastings asked the question to the crowd gathered at the City Auditorium for a Veterans Day ceremony Nov. 11 in Hastings.

Matticks, the ceremony’s keynote speaker, said it’s a question that goes through every soldier’s mind at some point while serving in the military.

He said every generation seems to have unique motivations, but the core belief for a soldier’s call to serve has resonated throughout the decades.

“The idea that our brave men and women are willing to sacrifice everything they have to give someone they don’t even know a better life, that tells you everything you need to know about Veterans Day and why we take this special day each year to say thank you to those who served our country,” Matticks said.

“Those who served in military have come to realize a couple of things: First, we really come to understand how incredible America really is. Not that we don’t have issues, but we really are blessed to live in the United States.

“Secondly, we want to see others have the same opportunities that we have, so we pour everything that we have into helping each other and those locals around us. All of a sudden, we clearly know what we’re fighting for.”

The audience attending the ceremony ranged in age from fifth-graders Matticks teaches at Longfellow Elementary to veterans who have witnessed and participated in several wars throughout our country’s history.

Matticks told those who had served in the armed forces that he may not know them individually, but he knows what’s in their hearts and what called them to serve.

Matticks grew up in Fairfield during the Vietnam War and believed he would never join any branch of the military, saying there was no way he could handle what those brave men and women were doing.

His mind changed in the sense that he ultimately did enlist.

After joining, Matticks’ viewpoint on all of those horrific war stories he had heard on the news shifted once he began hearing them from veterans, and he soon saw them for what they really were.

Matticks re-enlisted again before the attacks on Sept. 11, 2001, thinking he wouldn’t have to be deployed.

But the events on that fateful day left him feeling shock, disbelief and anger.

He previously feared going to war, but after that he wanted to answer the call.

Now being two decades past that infamous day, Matticks told the crowd it can be harder to understand what we are fighting for.

But his most recent deployment, from which he returned about a month ago, taught him that the young soldiers still possess the same core values he had when he went to war.

“They were so close and loyal to each other and the locals that they were working with and protecting; they were really fighting to keep each other safe,” he said.

Duane Norris, the master of ceremonies at the Nov. 11 event, started the ceremony echoing similar thoughts as Matticks’.

He said thousands of people have answered the call to serve since the country’s birth, and the same characteristics found in those people are found in those who serve today.

“This is the proud, honest and decent lineage of every American soldier; a willingness by ordinary people to join together in doing extraordinary things,” he said. “Our veterans are not superheroes, but they are heroes. They are, in all their glory, ordinary men and women that stood up to defend extraordinary ideals such as freedom and equality.”

After Matticks’ presentation, the Hastings High Trumpet Ensemble performed the songs that represent each branch of service.

Norris spoke on the final presentation of the ceremony, the POW/MIA table, where prisoners of war and those missing in action were recognized by a moment of silence.

The HHS trumpets then wrapped up the ceremony with the playing of taps.

Matticks told all of the service members in attendance that they have and will continue to “make a difference in the lives of so many people, even people you don’t even know.”

He said he is proud to serve alongside them and is continuously inspired by their actions.

Norris said leading the ceremony is always an honor for him. He reminded everyone that thanking veterans requires more than just saying the words.

“As we express our gratitude, we must never forget that the highest appreciation is not to utter words but to live by them,” Norris said. “I would hope that along with our thanks, we recognize our gratitude confers on us a debt; if we wish to truly honor the service and the sacrifice freely given, we need to keep our promises to every veteran.”

“Let’s hope this morning they all hear a loud thank you from us for the defense of the liberties we all enjoy.”