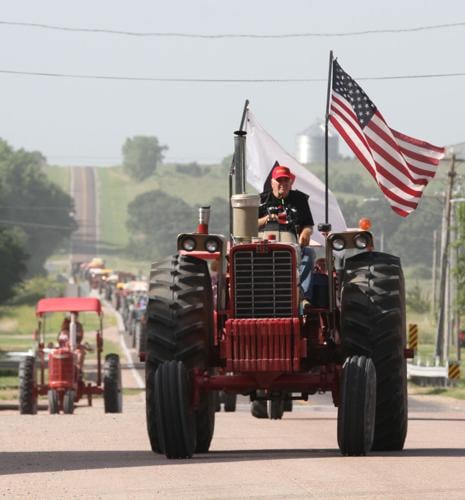 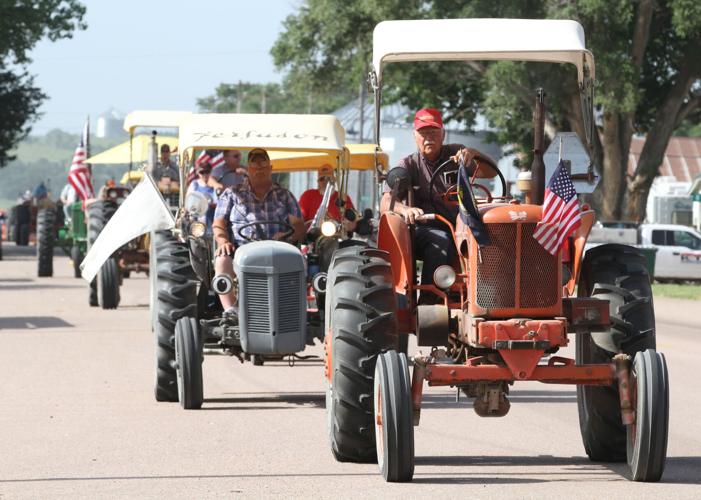 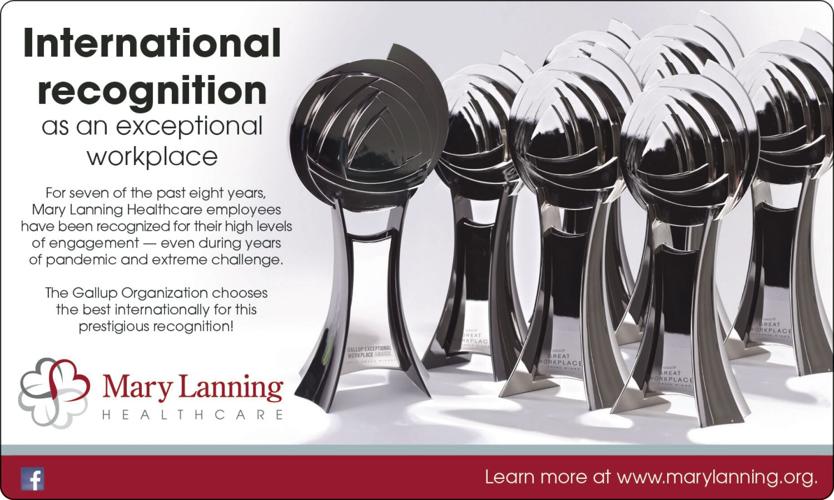 The sixth annual All-Nebraska Tractor Drive was based in Red Cloud.

There were 97 tractors registered for the event, but due to the heat, price of fuel and health issues there were 66 tractors on June 17 and 61 on June 18.

“So that’s a good group,” said Donna Wilton, secretary-treasurer for the All-Nebraska Tractor Drive. “It’s a manageable group, and I think everybody had a good time. Everyone said they really loved the route.”

Following breakfast on June 17, the tractor drivers departed from the LandMark implement dealership on West U.S. Highway 136 en route to the U.S. Center Monument near Lebanon, Kansas. The group had supper together back in Red Cloud and presented a donation to a representative of the Central Nebraska Veterans Home in Kearney.

After breakfast on June 18, participants drove to Guide Rock, traveling part of the way along the Guide Rock Diversion Dam, before stopping for lunch at the Starke Round Barn at Amboy.

He drove the lead pickup placing signs so everyone knew where to go.

“It’s been really good,” he said. “Everybody’s been real happy. A little dirty once in a while, but other than that everybody’s good. Pretty hot, though.”

All-Nebraska Tractor Drive co-organizer Nelson Trambly of Campbell said Knehans was a tremendous asset coming up with the route.

“It was a little dusty, but everybody really liked it,” Trambly said. “That’s what we do. We try not to go on the highway if we don’t have to, for safety’s sake, because these highways are narrow and you’ve got a lot of truck traffic, so we try to stay off of them as much as possible.”

He said it’s great to be able to support the veterans.

That is something his fellow organizer Larry Holmberg likes about the All-Nebraska Tractor Drive as well. Holmberg, who lives between Riverton and Campbell, served in the U.S. Army from 1968 through 1970.

Holmberg described the two-day drive as a “wonderful” time.

“We had the biggest tractor drive we’ve ever had,” he said. “I think a little long, a little hot the first day. It’s either too hot, too dusty or too muddy. It’s hard to get it just right.”

By the time participants reached the Starke Round Barn around 11 a.m., June 18 there were a lot of red faces after driving tractors in the sun for a day-and-a-half.

Knehans owns his own ice machine and bagged more than 80 bags of ice for the drive.

“They come out in spite of the heat, and 66 drivers proved that (Friday) when it reached 102 degrees,” Wilton said. “Yes, it was warm, but I’ve been on drives when it was warmer. We were very fortunate both days we had a breeze.”

Knehans, who serves as president of the Bostwick Irrigation District, received permission for the tractors to cross the Guide Rock Diversion Dam.

“The public can’t do that anymore,” Wilton said. “That was very neat to do.”

She said an event like the All-Nebraska Tractor Drive elicits a sense of community.

“It’s an opportunity for everyone to show off their tractors, and then they have a good time meeting other people because they have the same interests,” Wilton said. “Everybody can talk tractor, no matter what color it is.”

Holmberg said there is pride in showing off hard work.

“It’s a pleasure to take an old piece of iron, pull it out of the weeds, get it running, paint it up and show it off,” he said.

His 19-year-old granddaughter, Riley Saunders, drove the tractor Holmberg’s father bought when Holmberg was 8 years old. Holmberg had three tractors in the drive this year.

Stone was one of about 10 Georgians to participate in this year’s drive, having been connected to the event through a Glenvil native who now lives in Georgia.

“We love coming every year,” Stone said. “We have a good time. We get to see all the history around here.”

He shook off the heat.

Stone now works in the sewer water industry, but has a family history in farming. Participating in the All-Nebraska Tractor Drive is a chance to relive happy childhood memories.

Holmberg said everyone there has a common interest.

“Look around — there’s strangers from all over Nebraska, Iowa, Georgia, all over and they’re all getting together visiting about old tractors,” he said. “That’s what it’s all about.”