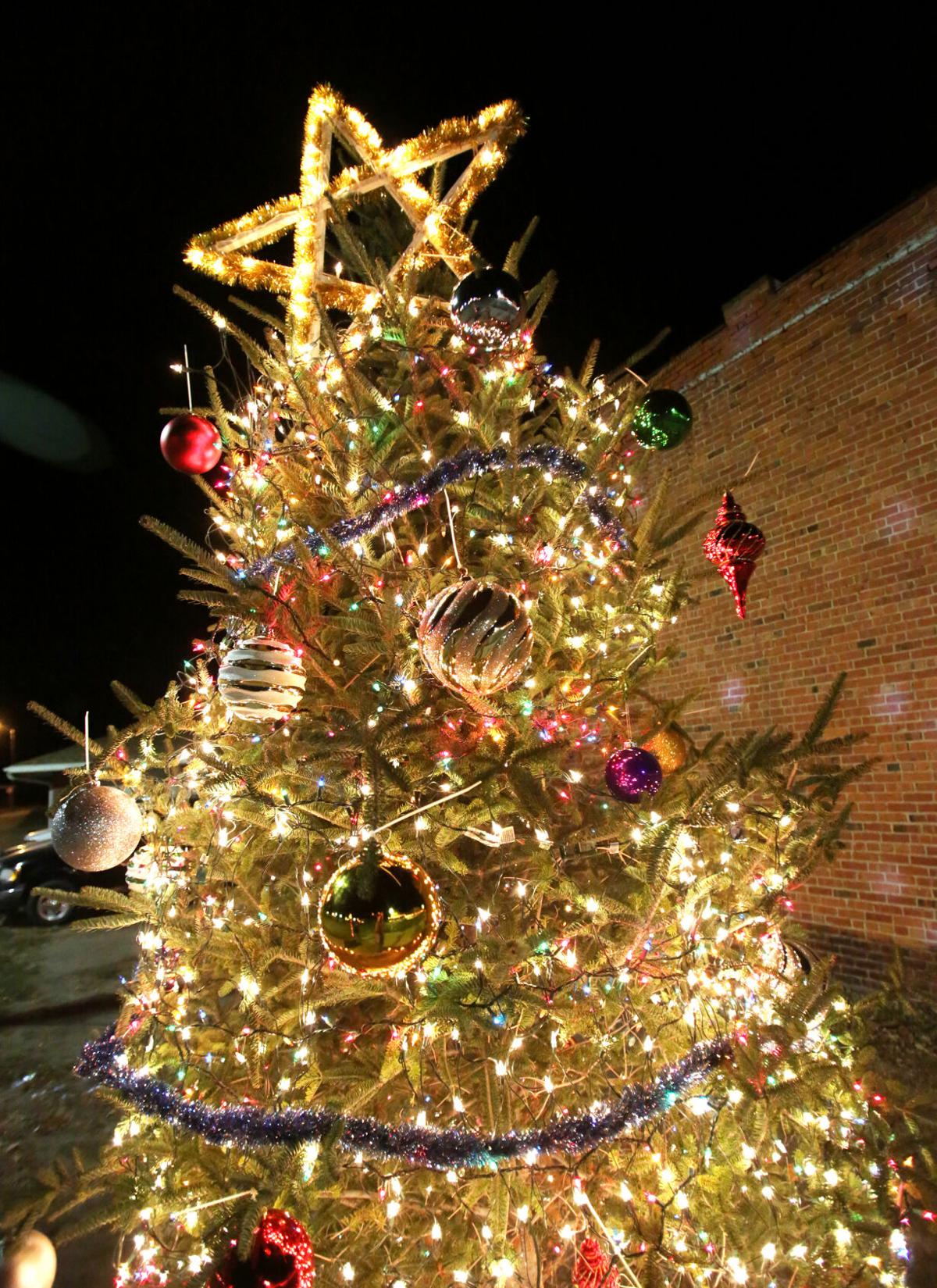 A Christmas tree decorates the corner of Smith Avenue and Maple Street in Kenesaw the night the tree was ceremonially lighted for the holiday season Nov. 27, 2021.

Editor’s note: The Hastings Tribune news department is presenting year-in-review highlights from 2021. The series concludes with entries from November and December.

The Hastings Area Chamber of Commerce announced it would turn over the former Whoopers & Hoopers basketball tournament to the Hastings Family YMCA, which will re-format the event as a three-on-three tournament called “Midwest Triple Threat.”

Jenna Thayer, owner of the home-based business Love Ewe Candle Co., was selected as winner of the fifth annual Big Idea Hastings competition, making her eligible to receive $5,000 in funding to further develop the venture. Thayer also is a Hastings police officer.

Men and women who have served the United States in uniform were honored at the annual Veterans Day parade in downtown Hastings.

Former Nebraska and Kansas City Royals baseball great Alex Gordon surprised members and coaches of the Hastings Little League team and joined them for a photograph when the team was honored during the Nebraska-Ohio State football game in Lincoln.

Longtime Hastings and Kenesaw area businessman Doug Nienhueser was honored posthumously by the Hastings Area Chamber of Commerce with its 2021 Aggie Award at the chamber’s annual Farmers and Ranchers Appreciation Barbecue.

Joe Patterson of Hastings, Nebraska commissioner for USA Softball, took office as president of the national organization. Patterson is a retired Hastings city administrator and current member of the Adams County Board of Commissioners.

Thousands of holiday revelers turned out for the Celebration of Lights in downtown Hastings after a year’s hiatus related to COVID-19.

Hastings Middle School seventh-grader Chloe Roberts was presented with a 911 Hero Award in a ceremony at the school. Roberts was honored for being cool under pressure when reporting a medical emergency for her 9-month-old brother in Sutton.

Hildreth rescue squad members helped Kevin Gregory and Jasmine Gutschow of Franklin welcome their son Raiden into the world in an emergency delivery along Nebraska Highway 10 after the couple’s vehicle broke down on the way to the hospital in Kearney.

The Kenesaw community gathered the Saturday after Thanksgiving to celebrate an all-out effort to decorate the town for Christmas. The lighting celebration was a fundraiser for the Kenesaw Heritage Museum.

The Minden community celebrated the 75th anniversary of “The Light of the World” outdoor Christmas pageant, which is presented each holiday season on the town square.

The city of Hastings purchased a building at 3505 Yost Ave. from the Hastings Economic Development Corp. Officials said the building would be used for vehicle maintenance and warehouse purposes.

District Judge Stephen Illingworth of Hastings of Nebraska’s 10th Judicial District retired from the bench after 33 years of service. Six lawyers submitted letters of application to fill the resulting vacancy.

Tyson Denkert of Kenesaw and Josh Shaw of Sandy Creek were named All-Tribland football athletes of the year.

Six cases of the novel coronavirus disease, COVID-19, traced to the new omicron variant were confirmed in the Public Health Solutions Health District, which includes Fillmore and Thayer counties in Nebraska. Those six cases became the first related to omicron confirmed in Nebraska.

Around 20 residents of Village Terrace in the Good Samaritan Society-Hastings Village were evacuated after a fire in the entryway filled the building with smoke.

The Hastings City Council opened five bids for demolition of the 16th Street viaduct. The bids ranged from $1.316 million to $6.32 million. Engineer’s estimate for the project, which includes grading and construction of a new 16th Street from St. Joseph Avenue to Kansas Avenue, plus sidewalks and parking areas, was $1.46 million.

Angie Riley, a paradeucator at Lincoln Elementary School, was named Elementary Paraeducator of the Year by the Nebraska Department of Education.

Students from several local and area schools sat in on a session of the Nebraska Supreme Court in the Hastings High School auditorium. The session was part of the high court’s educational outreach to students across the state.

The work of more than 200 Minden area residents was unveiled at the Minden Opera House following the arrival of “Community Unfolding in Minden,” an origami community art piece directed by Lincoln artist Linda Stephen. The piece, which depicts a Christmas scene on the Minden town square, was completed over several months’ time and now hangs on the main floor of the Opera House.

The Hastings High School boys and girls varsity bowling teams both defeated Southern Valley in a dual to earn their first wins since bowling became a sport officially sanctioned by the Nebraska School Activities Association.

Diane Keller of rural Harvard, a longtime member of the Central Community College Board of Governors, was honored with the Nebraska Community College Association’s Governor’s Award for her service to CCC and her efforts to support Nebraska’s two-year colleges.

The Hastings College Choir and high school choirs from Hastings High School, Minden and Harvard joined the Hastings Symphony Orchestra in its annual holiday concert. The large number of musicians required the event to be moved to Lynn Farrell Arena at Hastings College.

Despite objections from a roomful of Hastings residents, the Hastings City Council voted 7-0 to award a $1.32 million contract to United Contractors Inc. of Johnston, Iowa, low bidder for demolition of the 16th Street viaduct over the Union Pacific railroad tracks and related grading and paving work.

The Hastings Board of Education voted 8-0 to award contracts for improvements to the bleachers in the Hastings High School north gym and a resurfacing of the high school track.

Carson Blum, a past standout basketball athlete at Minden High School and Hastings College, made his return to his high school alma mater as the Whippets’ new head boys basketball coach.

The Hastings City Council approved an agreement with the state of Nebraska for installation of left-turn signals at Seventh Street and other key intersections along Burlington Avenue.

A wily and dangerous weather system brought high winds, severe thunderstorms with wind-driven hail and tornadoes, dust storms, wildfires and plunging temperatures to Tribland, resulting in various kinds of property damage within the space of a single day. The National Weather Service confirmed at least six tornadoes touched down in Tribland.

Hastings Citizens With a Voice, an organization opposed to demolition of the 16th Street viaduct, got a green light from Hastings City Clerk Kim Jacobitz to proceed with circulating a new referendum petition in the matter. The petition effort, if successful, will require a special election seeking to stop the City Council from following through with its decision to tear down the bridge over the Union Pacific railroad tracks.

The Hastings Public Library eliminated the practice of fining patrons for overdue materials.

The Adams County Board of Commissioners approved 6% annual raises for most elected county officials for the years 2023-26.

Photographer Carol Highsmith, who has been traveling the United States for more than four decades in search of images for her collection on modern American life, visited the Bigfoot Crossroads of America Museum and Research Center in Hastings for a photo shoot. The images will be part of a permanent exhibit of Highsmith’s work at the Library of Congress in Washington.

Cara Kimberly was the new executive director of The Lark in downtown Hastings, home of the Listening Room concert series. She took over the role from Robin Harrell, the founding executive director, who moved to Lubbock, Texas.