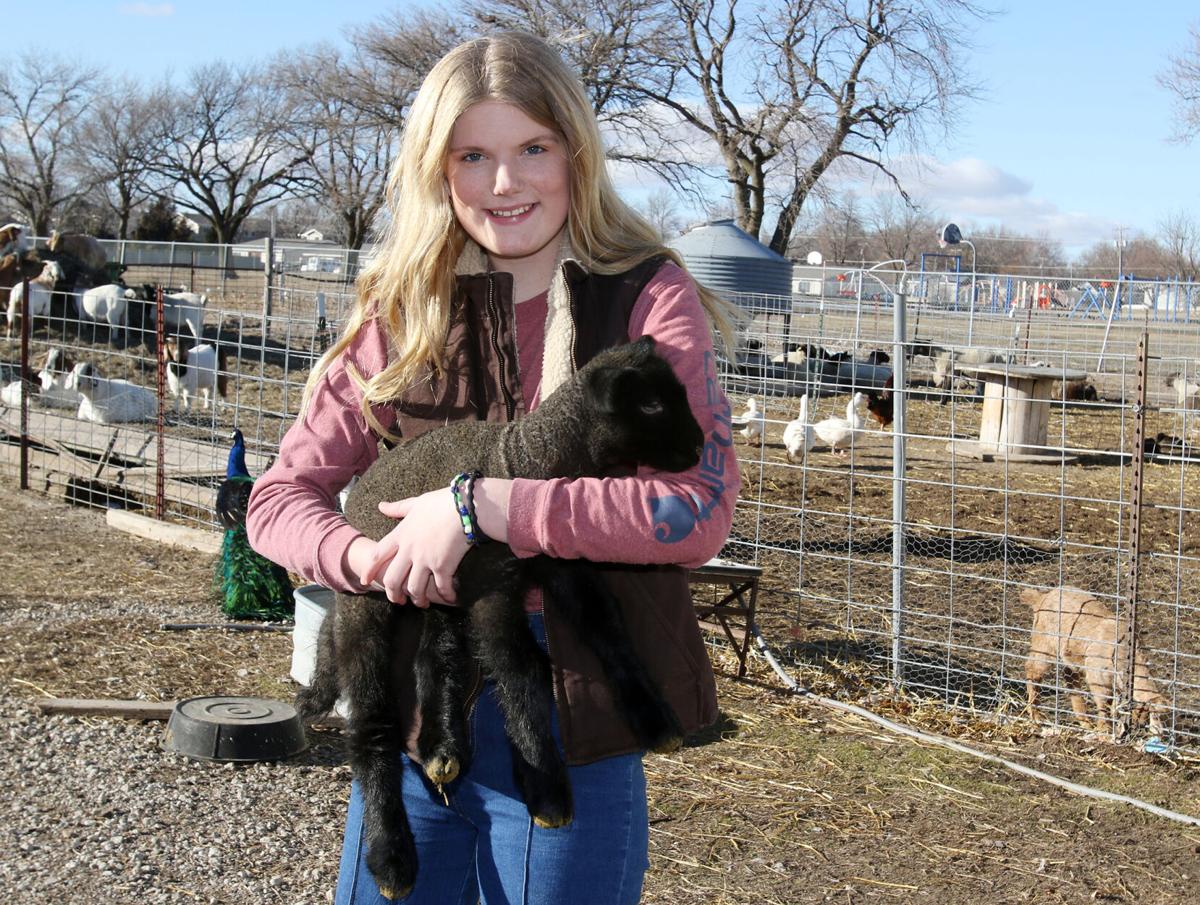 Jaden Russell of Hastings was named the 2020 Tribland 4-H’er of the Year. She is seen here at the Rural Ranchers farm in Hastings. 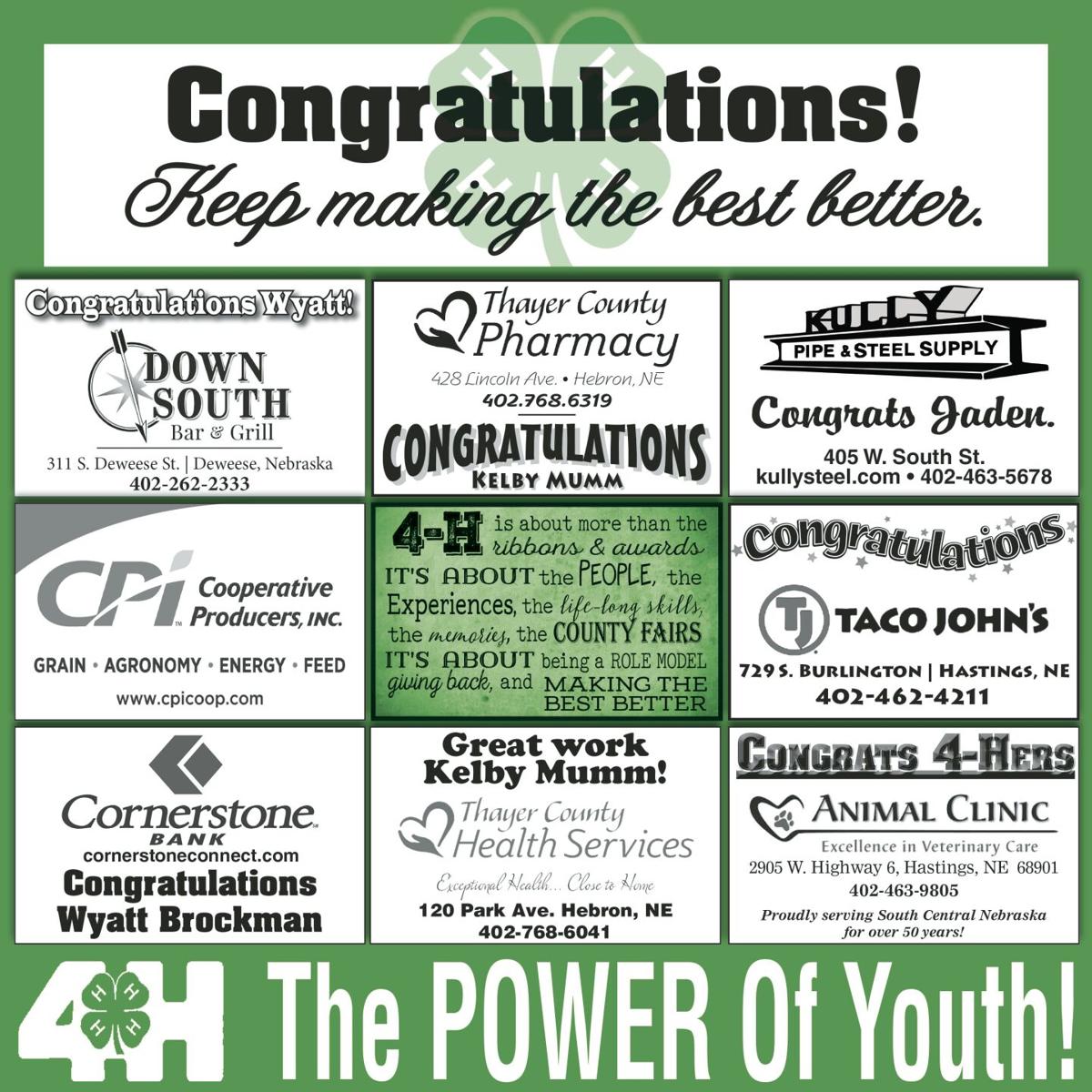 When Jaden Russell was 4 years old, her parents got divorced.

“Due to their divorce, I developed anger issues,” Jaden said. “I was unable to control my anger and would have meltdowns almost daily.”

That’s until she was in fourth grade and was introduced to 4-H, a program where she could learn more about and foster her love of horses.

“Shortly after joining 4-H, I had noticed something different about myself. I had felt a weight lift off my shoulders,” Jaden said.

Today Jaden is a very successful 17-year-old who is still a dedicated 4-H’er along with working at Big Dally’s Deli and attending Hastings High School.

Now, she adds the title of Hastings Tribune Outstanding Tribland 4-H’er for 2020.

“I’ve always had a love and passion for animals, working with crafts and everything that is in 4-H,” Jaden said from her home in Hastings recently.

She would go to see animals with her grandfather as a kid, but everything really changed when she joined 4-H after an introduction from Dave Berens, leader of the Rural Ranchers 4-H Club.

Rural Ranchers is a bit unique in that the club owns the animals and all of its members work together to care for them at barns located just north of the Adams County Fairgrounds in Hastings.

In the club, Jaden started out by first showing rabbits and slowly moved into sheep, poultry and eventually cattle.

“I love everything about it,” she said of working with animals. “They have these great personalities people don’t see. They’ve got just such loving, fun personalities.”

Her favorite animals are horses and poultry.

“You’re the poultry girl,” her mom Michele Burnham interjected. “She just asked me for a duck last week. She wants her own chickens so bad.”

Jaden said most people see poultry as just birds, but that they’re fun and underappreciated creatures.

“And it’s not like showing other animals where you just walk your animal out in the arena,” she said. “You actually have to really work on getting your speech perfected and be comfortable doing that speech in front of others.”

As an older member of the Rural Ranchers club, Jaden now has taken a lot of time to work with younger members. With the smaller animals like poultry or rabbits, the members showing those animals will sit around a big table to work with their animals or learn the information needed for their judging interviews.

“When you’re younger, you don’t know as much about the animal,” she said. “You’re just there to be around the animals.”

Several years ago at the fair, Jaden said, her mother was sitting next to a little girl who was worried she didn’t know what to say to the judges about her chicken. Even though she was very busy with her own animals, Jaden took the time to coach the girl through her speech.

“I think she got a purple ribbon on her speech, so I was really proud of her,” Jaden said.

A few months later, Jaden saw that same girl helping another 4-H’er with a craft project.

That’s one aspect of Rural Ranchers that Jaden and her mom both agree that a lot of people don’t understand. The club is seen visibly for all of its work with livestock; however, during the school year club members meet once a month to do crafts and other projects including everything from planting succulents to quilting.

Some of Jaden’s favorite projects over the years have been floriculture and photography.

“I’m really into the plants and growing them,” Jaden said.

“If you drive by our house in the summer, my whole front yard is full of planters,” Michele added. “And she’s got flower planters in the back full of more flowers.”

Jaden’s favorite flower is the lisianthus, which has large blooms in a variety of colors.

“They’re kind of a challenge,” she admitted. “They’re very seasonal, so if you don’t get them planted at the right time to line up with fair, there’s a good chance you won’t have pretty flowers to enter.”

And she often has her camera with her, taking photos of her flowers, her animals and beautiful Nebraska sunsets.

While she has another year of 4-H, Jaden already is sad to see it end.

With all she’s learned and the passions she’s cultivated, however, Jaden hopes her involvement with 4-H never ends.

Her plan is to attend the Nebraska College of Technical Agriculture in Curtis before transferring to the University of Nebraska-Lincoln with the end goal of becoming an extension specialist.

Looking back at her 4-H career thus far, Jaden said the things she has appreciated the most aren’t the ribbons or the successes, but the relationships.

“It’s a big family. We’re just a really big family,” she said. “That’s the main thing I can say. We’re all super close. We’re not just there for 4-H. We’re there to help each other out with everything. We’re friends outside of 4-H. It’s one of the best things.”