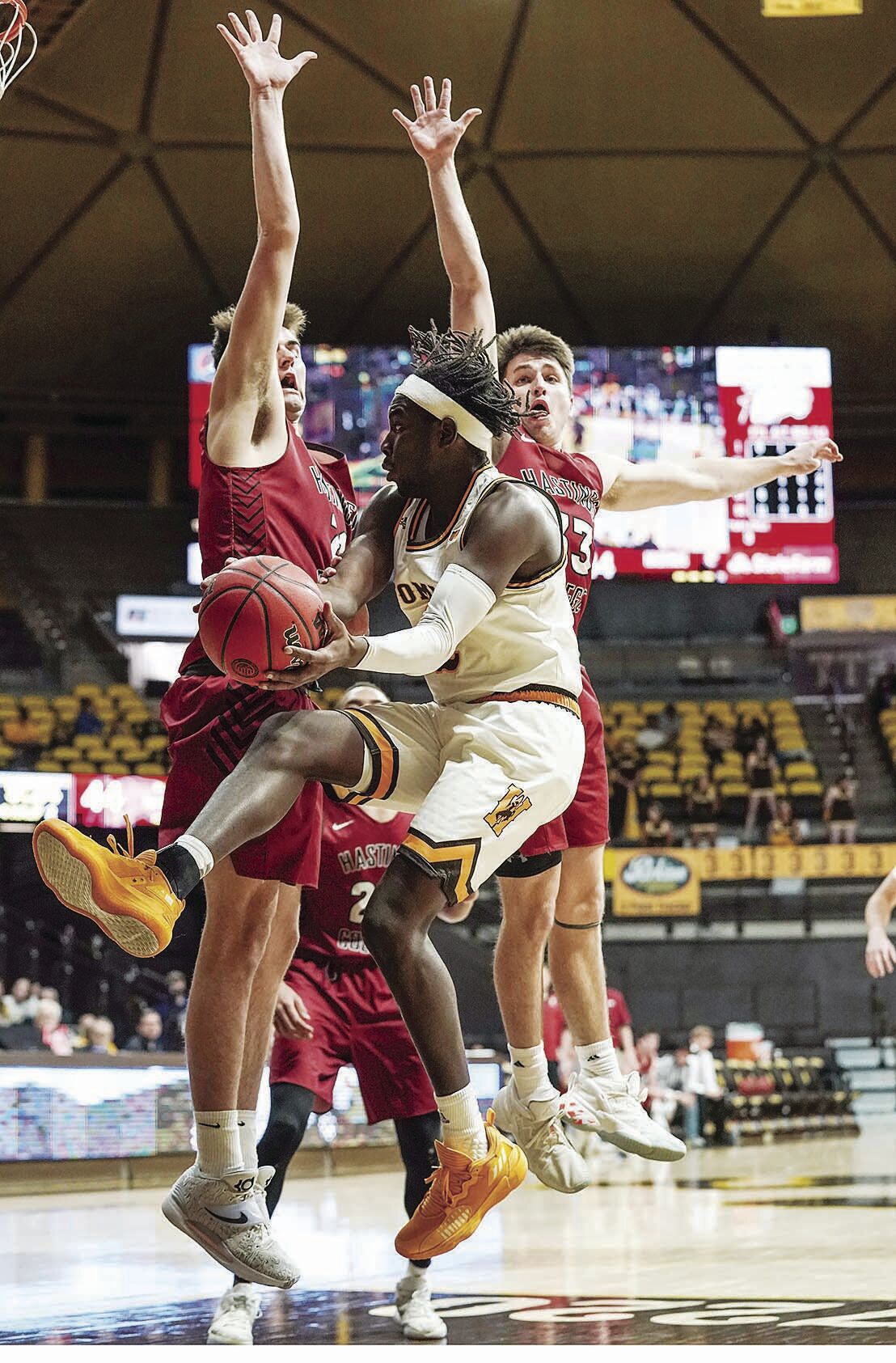 University of Wyoming’s Deng Dut is met under the basket by Hastings College’s Hayden Grint (21) and Ashton Valentine (33) Friday during an exhibition game at Arena-Auditorium in Laramie, Wyo. 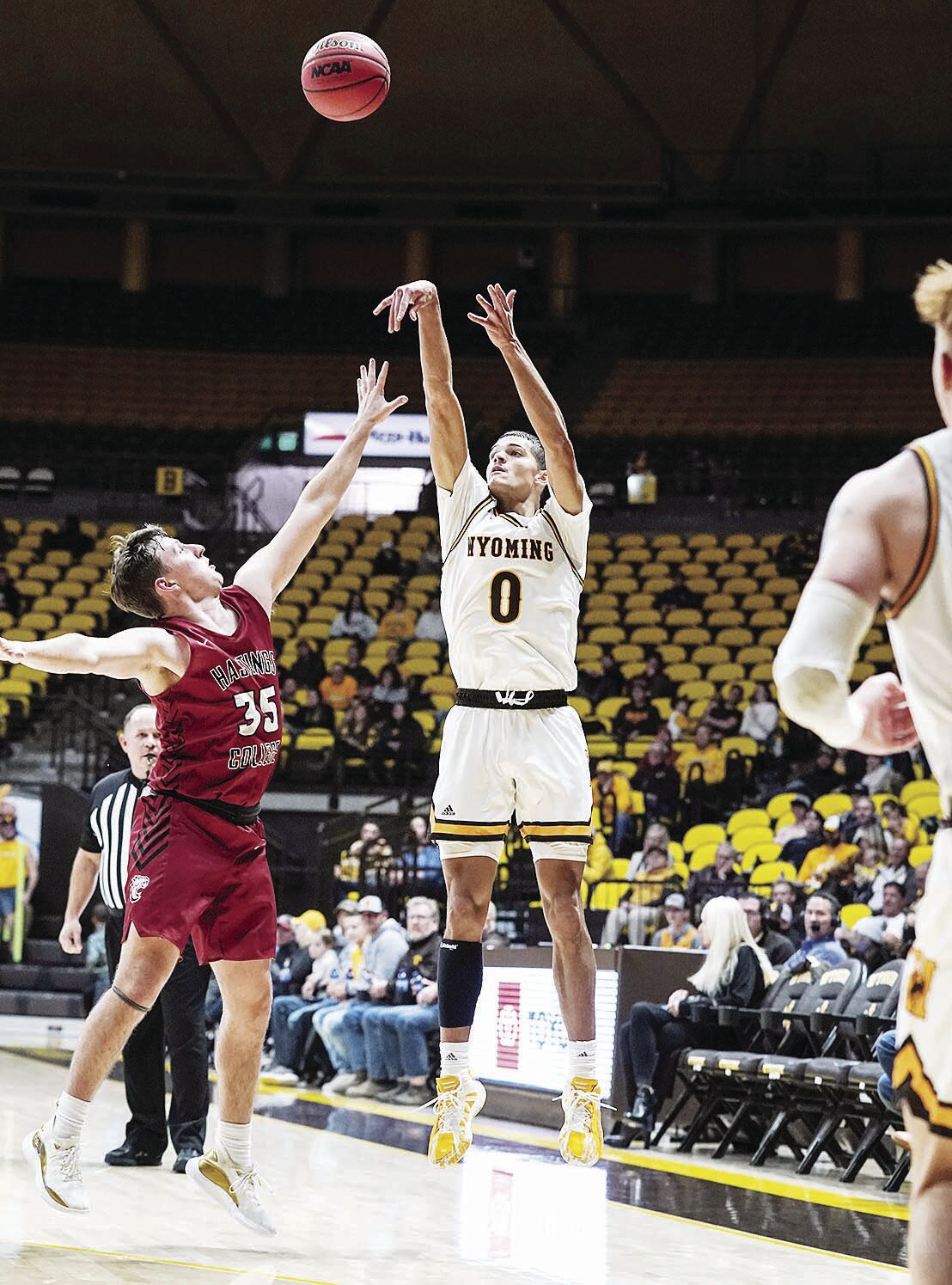 University of Wyoming’s Drake Jeffries (0) shoots a 3-pointer against defense from Hastings College’s Evan Kingston Friday during an exhibition game at Arena-Auditorium in Laramie, Wyo.

University of Wyoming’s Deng Dut is met under the basket by Hastings College’s Hayden Grint (21) and Ashton Valentine (33) Friday during an exhibition game at Arena-Auditorium in Laramie, Wyo.

University of Wyoming’s Drake Jeffries (0) shoots a 3-pointer against defense from Hastings College’s Evan Kingston Friday during an exhibition game at Arena-Auditorium in Laramie, Wyo.

Hastings College knew what it was walking into.

A small NAIA school facing an NCAA Division I program?

The writing was on the wall.

But Bill Gavers didn’t see it that way.

The Broncos’ ninth-year head coach saw opportunity. Gavers believes there are learning moments anywhere you seek to find them.

Whether it be on the court inside Baxter Arena against the Summit League’s University of Nebraska at Omaha Mavericks or Arena-Auditorium in Laramie, Wyoming, versus the Mountain West Conference’s Cowboys.

While the Broncos’ two exhibitions this season have been wildly contrasting, they’re valuable.

“It doesn’t matter if you’re playing UNO, Wyoming or Doane (University), you’re always trying to develop good habits,” said Gavers, whose team is 6-3 this season (exhibitions not included). “They’re really good games for our guys. They love playing in them, the experience and challenging themselves against top-level guys.”

It doesn’t hurt that Hastings is financially incentivized to play the games, either.

It’s no different than Nebraska football shelling out cash to face FCS Fordham.

“We get some guaranteed money out of those games to help our program,” Gavers said. The amounts paid to HC were not disclosed to the Tribune.

The Broncos had been in talks to play Omaha for a while, Gavers said. This season it finally aligned for the teams to meet, and they did Nov. 9 in Omaha.

“My neighbor is (also) his cousin,” Gavers said with a laugh. “That wasn’t the connection that got the game (though). I’ve known Derrin a long time and we’ve been trying to play them and this year they finally agreed.

“It was a unique experience for our guys. That was a fun deal.”

The result almost added to the pleasure. Hastings narrowly lost 67-57 to the Mavericks, who are 0-5 this season otherwise.

The Broncos trailed by just five with six minutes left.

“I thought that gave us a lot of confidence that we have guys that compete. They didn’t back down. They were expecting to win the game.”

In the final stretch, one of the glaring discrepancies between NAIA and NCAA Division I came to the forefront. Gavers had to laugh about it afterward.

A dunk by HC’s Dashawn Walker at the buzzer of the shot clock was waved off after video review.

“They went to the monitor and it was an air ball. Dashawn didn’t get it out of his hands by, like, .1 seconds,” Gavers said.

“I told the ref, ‘Let’s go with the NAIA rules tonight and not go to the monitor.’ “

Gavers said many HC alumni in the Omaha area showed out for the game and it’s also a nice recruiting tool to pitch prospects on the idea of exhibition outings at D-I schools.

At Wyoming on Black Friday, it was a much different story.

The Cowboys tied an NCAA record with 28 made three-pointers in their 108-59 win while the Broncos were extremely short-handed due to COVID-19 protocols.

HC traveled just seven players to Laramie for the ballgame.

“I want to thank those seven players for Hastings who showed up,” said Wyoming coach Jeff Linder. “And it was obviously unfortunate that we didn’t get to see their full team. That’s just the unfortunate reality of COVID — and not necessarily COVID within their program, but in terms of COVID protocols... They played really, really hard. Credit to those guys and their coach for bringing those guys over and doing that. That’s not easy.”

Gavers said assistant coach Brady Barrett is to thank for the opportunity to play Wyoming.

“Laramie is a very unique place to go,” said Gavers. “It’s a neat venue; they actually have a really, really good team this year that could make some noise late in the year.”

Three Broncos did reach double digits in scoring in the game led by transfer Mathias Nchekwube, who had 19 points and seven rebounds.

“I think it’s a lifetime memory they’ll be able to share with their families forever,” Gavers said.

“It’s hard to make 28 (three-pointers),” Linder said. “It’s hard for guys just to go in the gym by themselves and make 28 for 54. That’s really hard to do. To actually do it in the game with the crowd, with the defense, that’s a pretty good mark.”

This season marks the first time Hastings has played a Division I opponent in a decade. The 2011 meeting was with the Mavericks, who then were in their first year as a top-tier program.

In years past, HC had played Division II foe Nebraska-Kearney for an exhibition, but that contract ended in 2019.

A goal, Gavers said, is to travel to Lincoln to play Fred Hoiberg’s Nebraska basketball team.

The Huskers have welcomed Peru State and Doane (twice) the last three years.

“We’d love to do that at some point in time with the (Hastings) connection to Tom Osborne,” Gavers said. “You’re always just looking for unique games like that to play.”

The Hastings College men’s basketball team dropped its 11th consecutive game on Wednesday night after falling to Morningside 93-73. But the Br…