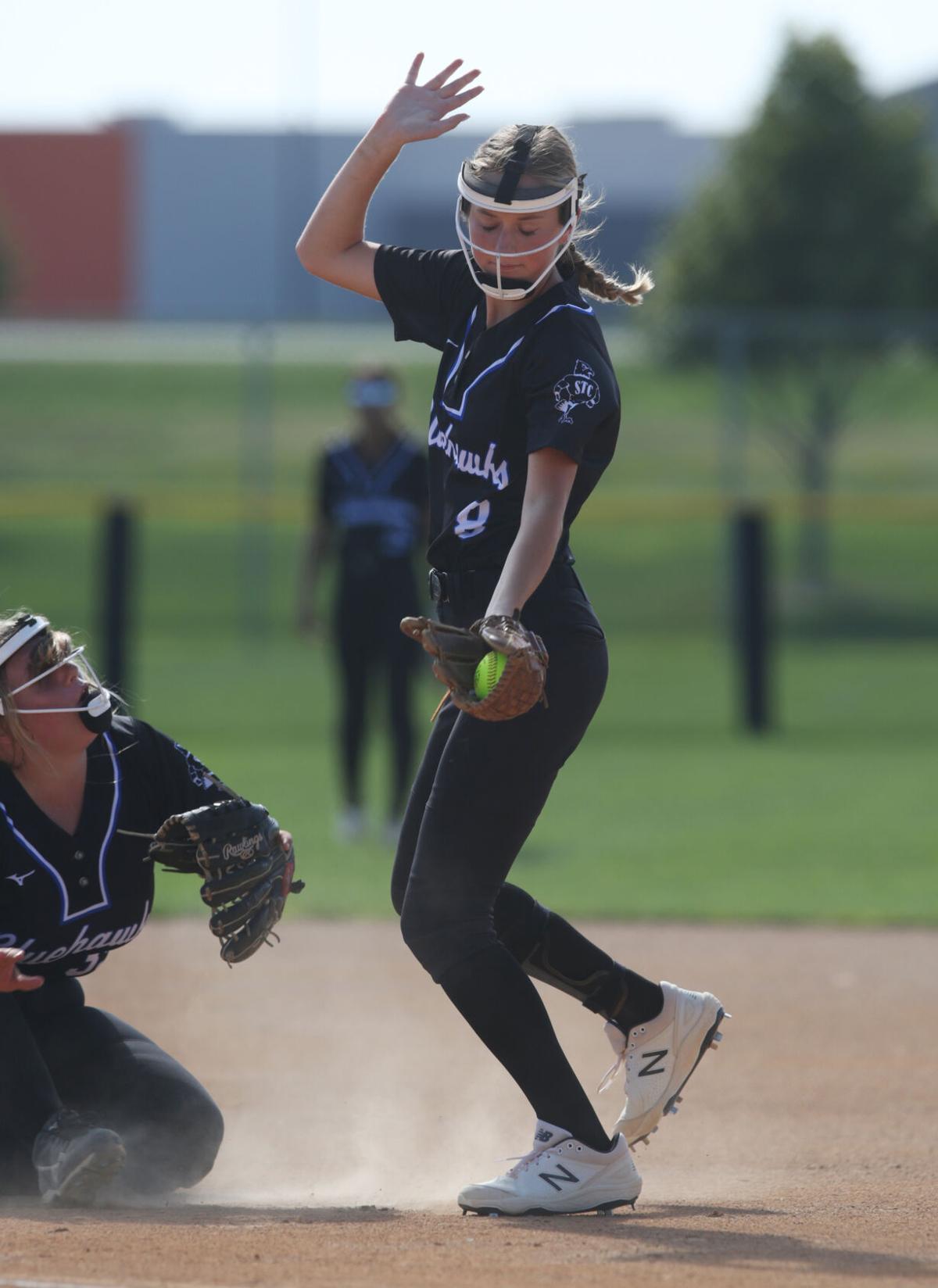 St. Cecilia’s Olivia Kvols makes a play after colliding with pitcher Jordan Held in their game against Centennial Monday at Smith Softball Complex. 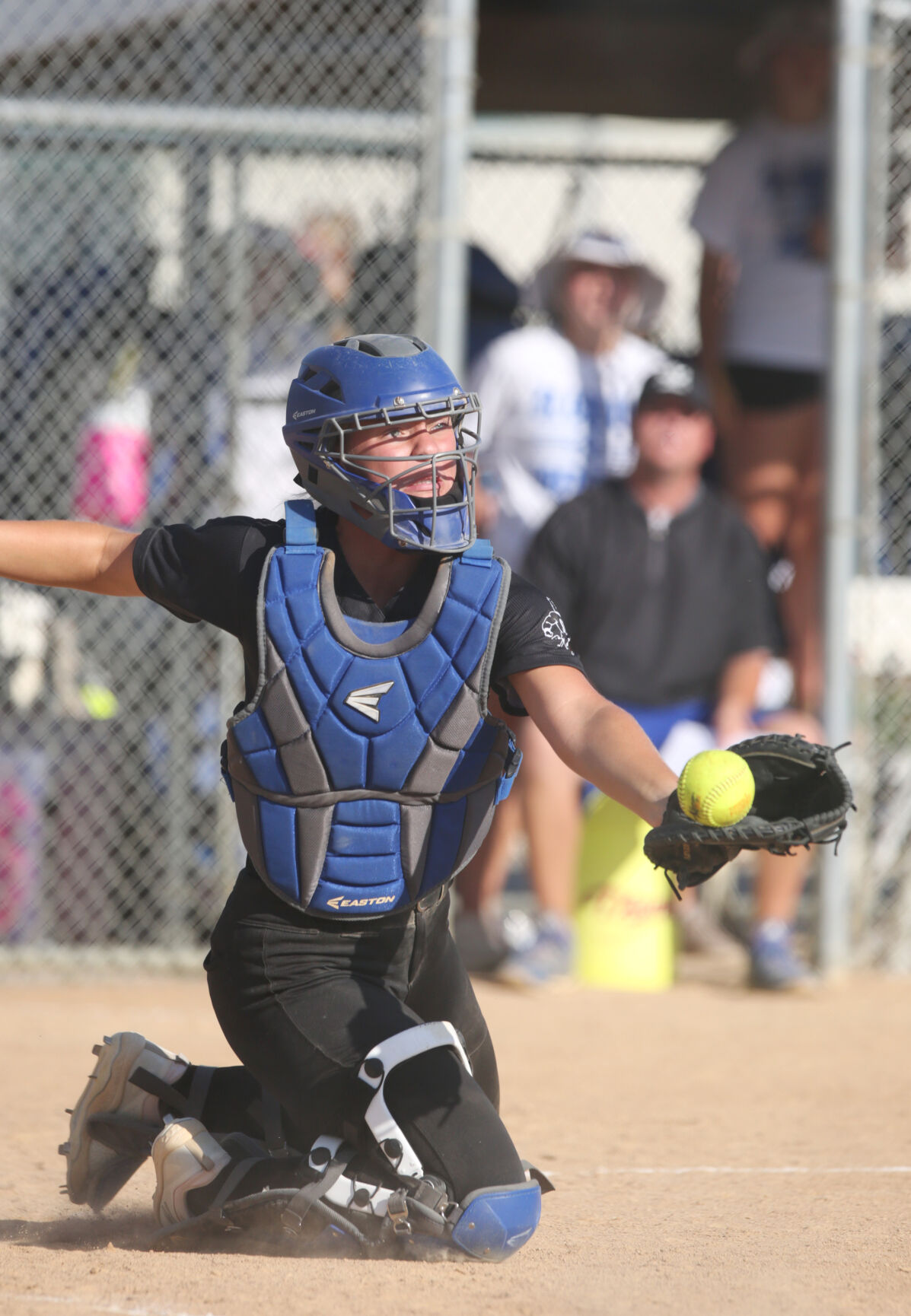 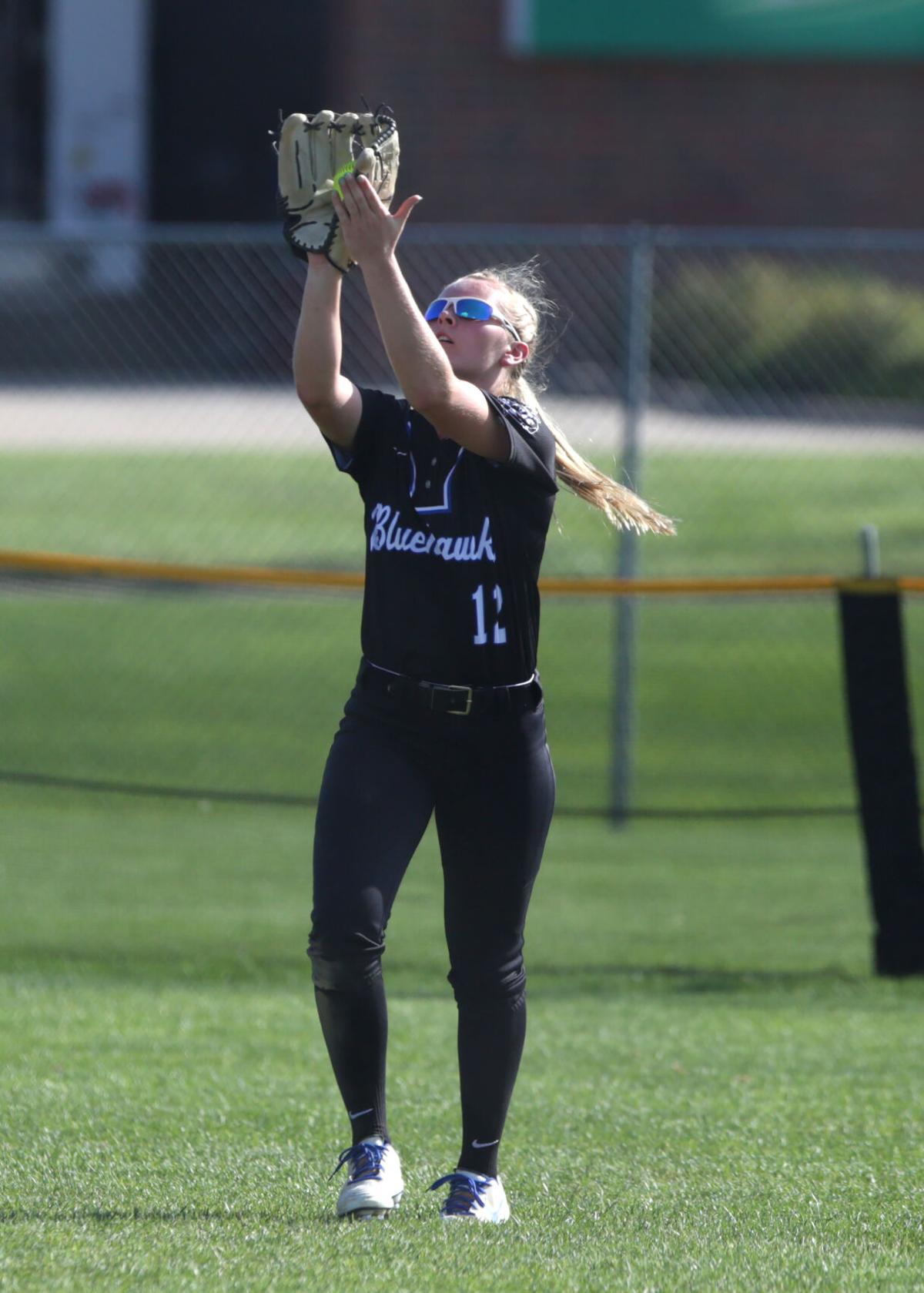 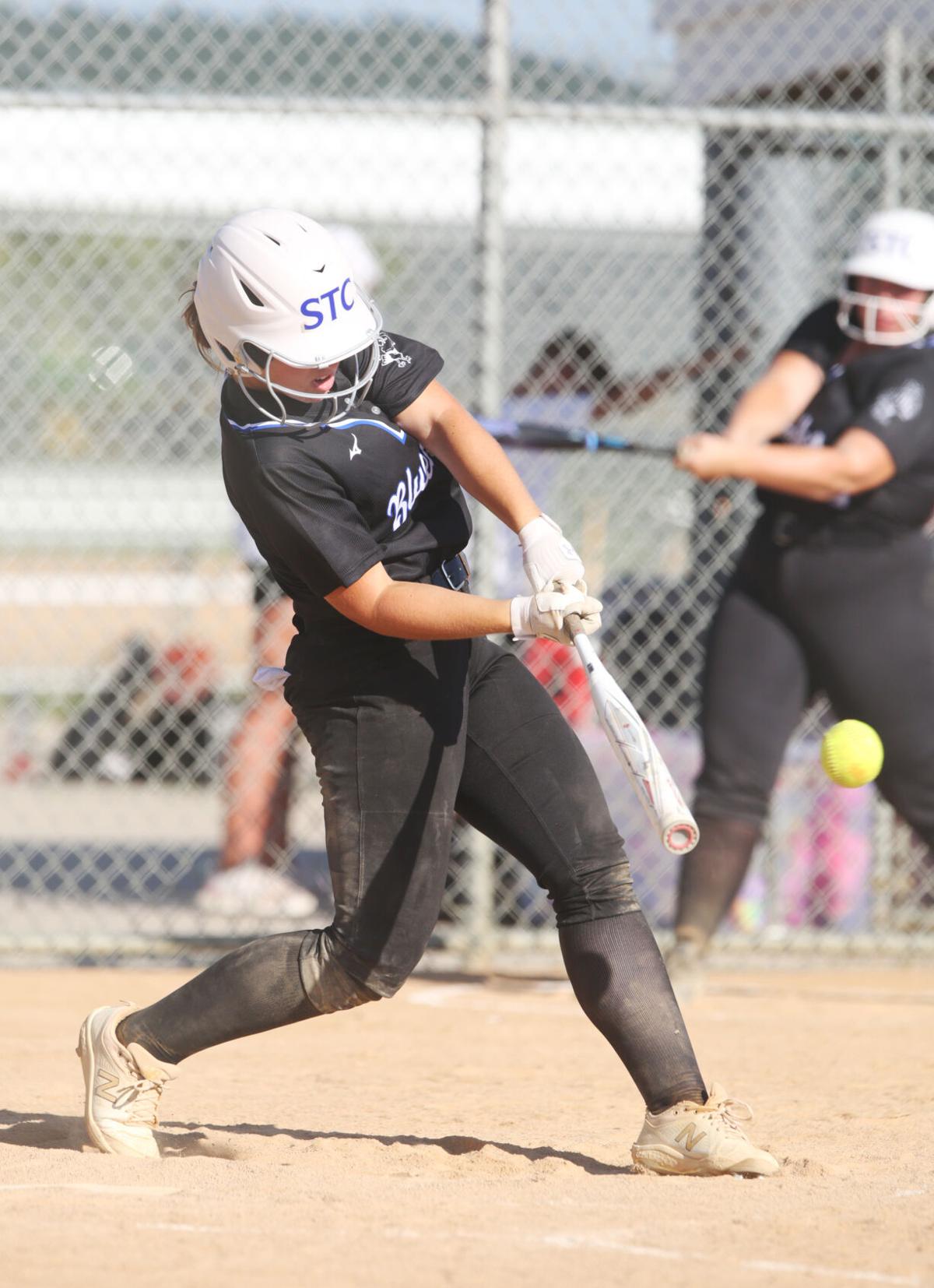 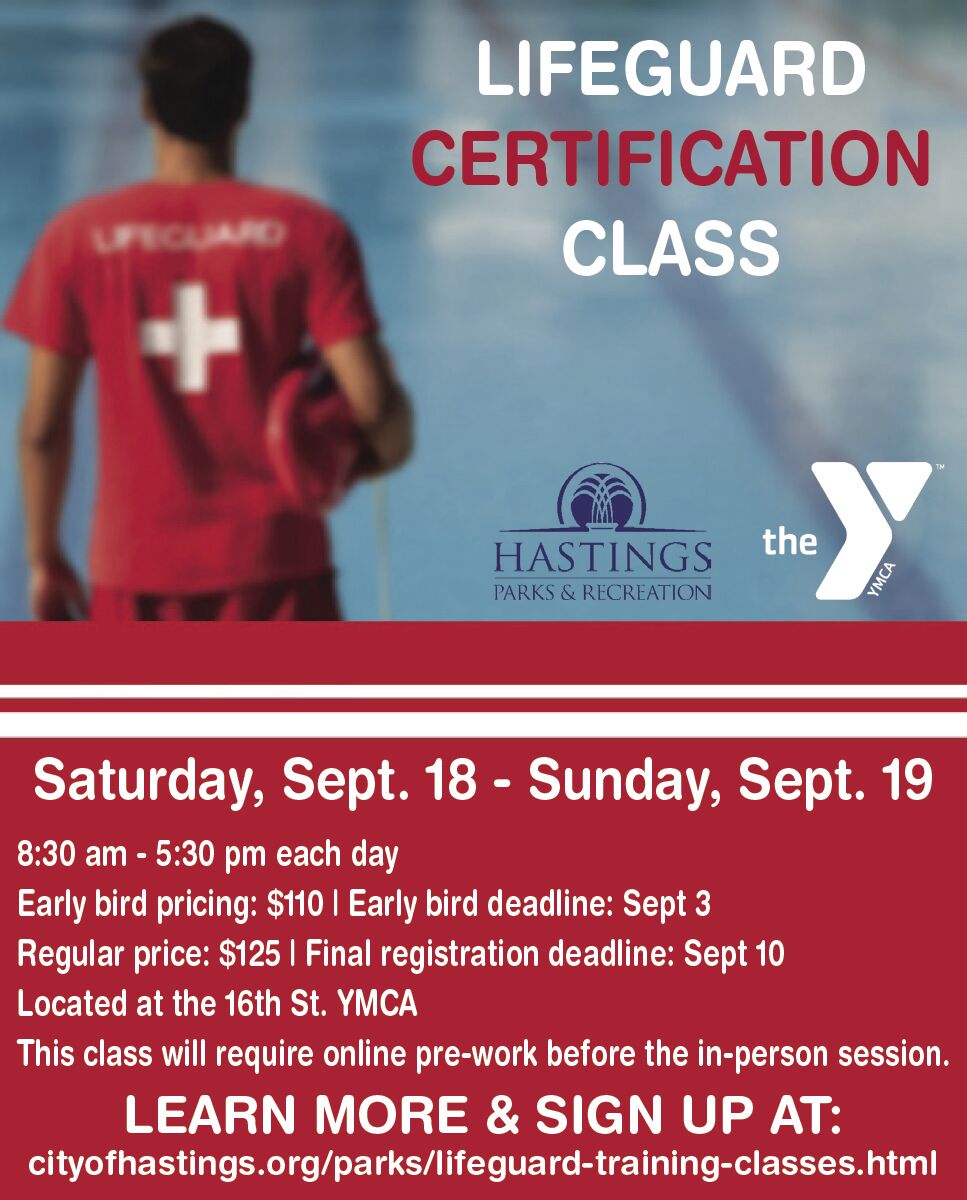 St. Cecilia’s Olivia Kvols makes a play after colliding with pitcher Jordan Held in their game against Centennial Monday at Smith Softball Complex.

The St. Cecilia softball team has put together a nice start to the season, and the Hawkettes were excited to put that talent on display in front of the home fans for the first time this season.

STC hosted Centennial and Kearney Catholic in a triangular on Monday, coming off a tournament in which it went 2-1, with the only loss coming to the No. 9 team in Class B, Wahoo. But the Hawkettes handled their business at Smith Softball Complex, run-ruling Centennial 9-1 and beating Kearney Catholic — a fellow state tourney team last fall — by a score of 15-5.

“It’s been a really good start to the season,” said STC head coach Ryan Ohnoutka. “We take it one game at a time in triangulars. Centennial, they always play tough...and we were ready for that and we took care of business.

“And this win was huge for us, against Kearney Catholic. We’ve been going back and forth with them for the last few years, so to get this one was big also.”

St. Cecilia started the night as the away team against the Broncos, and they erupted for five runs in the opening frame. In the inning, Olivia Kvols, Kiersten Kober, Tatum Kirkac, and Jordan Head all recorded RBIs. The outburst highlighted an offense that has averaged 9.3 runs in its victories this year.

The offense continued to add to its total as the game progressed, but the early lead was never in jeopard, thanks to the work on the other side of the ball.

Head was the Hawkettes starter in the circle, and she wen the distance, throwing all five innings and allowing just one run on five hits.

One of the biggest plays the defense made came in the final inning. After the first two Centennial runners reached base, the Broncos’ two-hole hitter Savannah Horne squared around to bunt. The ball was popped up and STC catcher Shaye Butler caught it with her bare hand and fired to second for a double play.

The defense came up big immediately in the nightcap, as well, behind starter Allison Stritt. In the top of the first inning, Kearney Catholic quickly had runners on second and third with no outs. STC then got the second out, throwing out Stars runner Krista Lee, who broke for home on a ground ball to Kirkac.

Kirkac then ended the inning on another ground ball, firing to first to get the Hawkettes out of the jam.

“I’ve been proud of our outfield, the whole season so far. We have speed in the outfield and you just know they’re going to run the ball down and make plays. I also have to give a shout out to Tatum Krikac; she played an outstanding third base. She’s gotten so much better in the infield by working hard on her game, and it showed (Monday) with some big plays,” said Ohnoutka.

The St. Cecilia offense carried that momentum into the bottom of the inning, posting four runs on the board. Shaye Butler drove in the first run of the game, and, after STC scored on an error, Tayelor Butler put an exclamation mark on the frame with a two-run homer, belted over the fence in left-center.

“Just getting off to a hot start is huge in softball,” the STC coach said. “It gives the girls a lot of confidence and it helps our pitcher relax and feel more comfortable without having the stress that could go with it.”

STC’s offense continued to crush the ball. In the third inning, the Hawkettes powered their way to five more runs, highlighted by Tayelor Butler’s second homer of the game. On the day, Tayelor had three extra base hits and five RBIs.

“We’re a powerful team up and down the lineup,” Ohnoutka said. “I’m really proud of Tayelor and the success she had (Monday). The smile on her face really, really great to see. When she’s feeling good, she can hit.

“Up and down the lineup, we’re tough, one through nine. It takes a whole team effort, and we always preach that. The hits just kept coming in those innings.”

Shaye Butler had a two-run single in that fifth inning, and Bailey Kissinger drove in a run, as well.

The fourth inning marked the third time in the game that St. Cecilia scored at least four runs in a frame. The Hawkettes tacked on five more runs, and it was Kiersten Kober’s infield single that drove in the run which put into effect the 10-run rule.

St. Cecilia will be back in action Thursday against Central City at the Smith Complex.