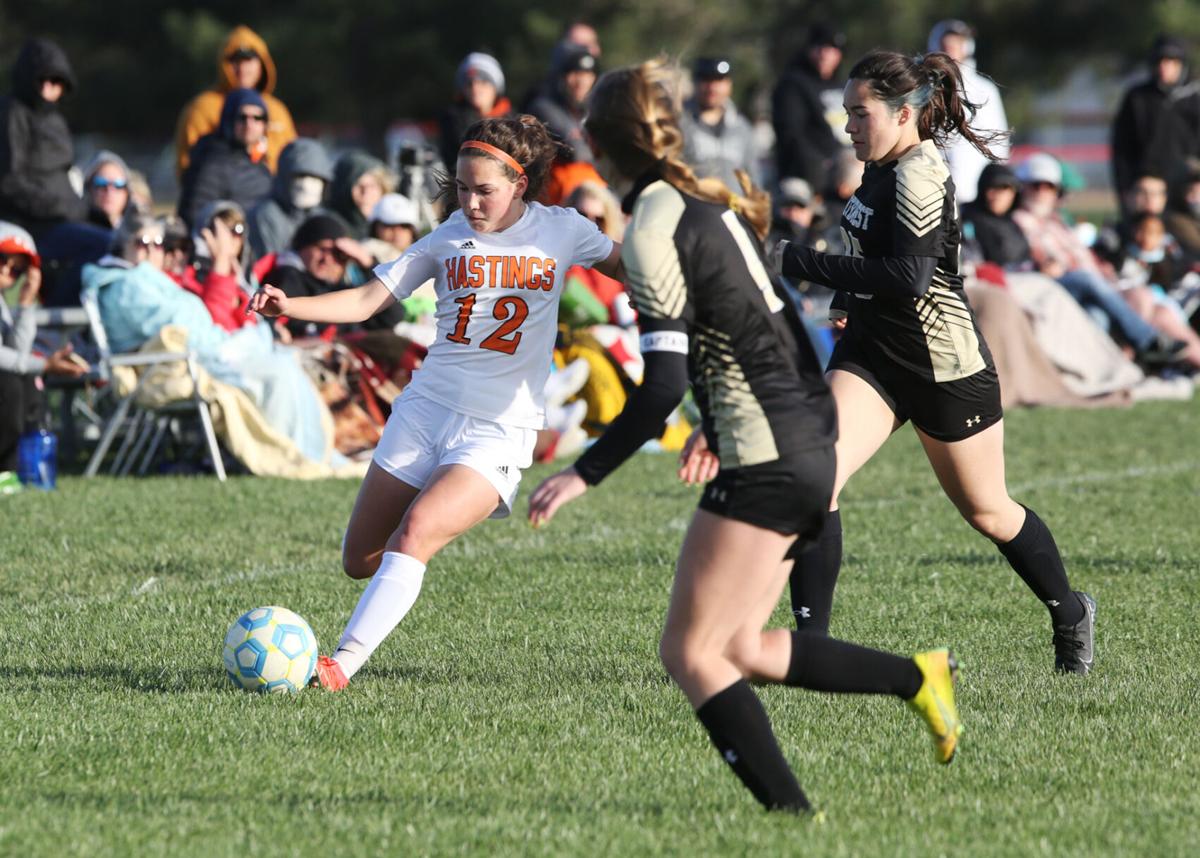 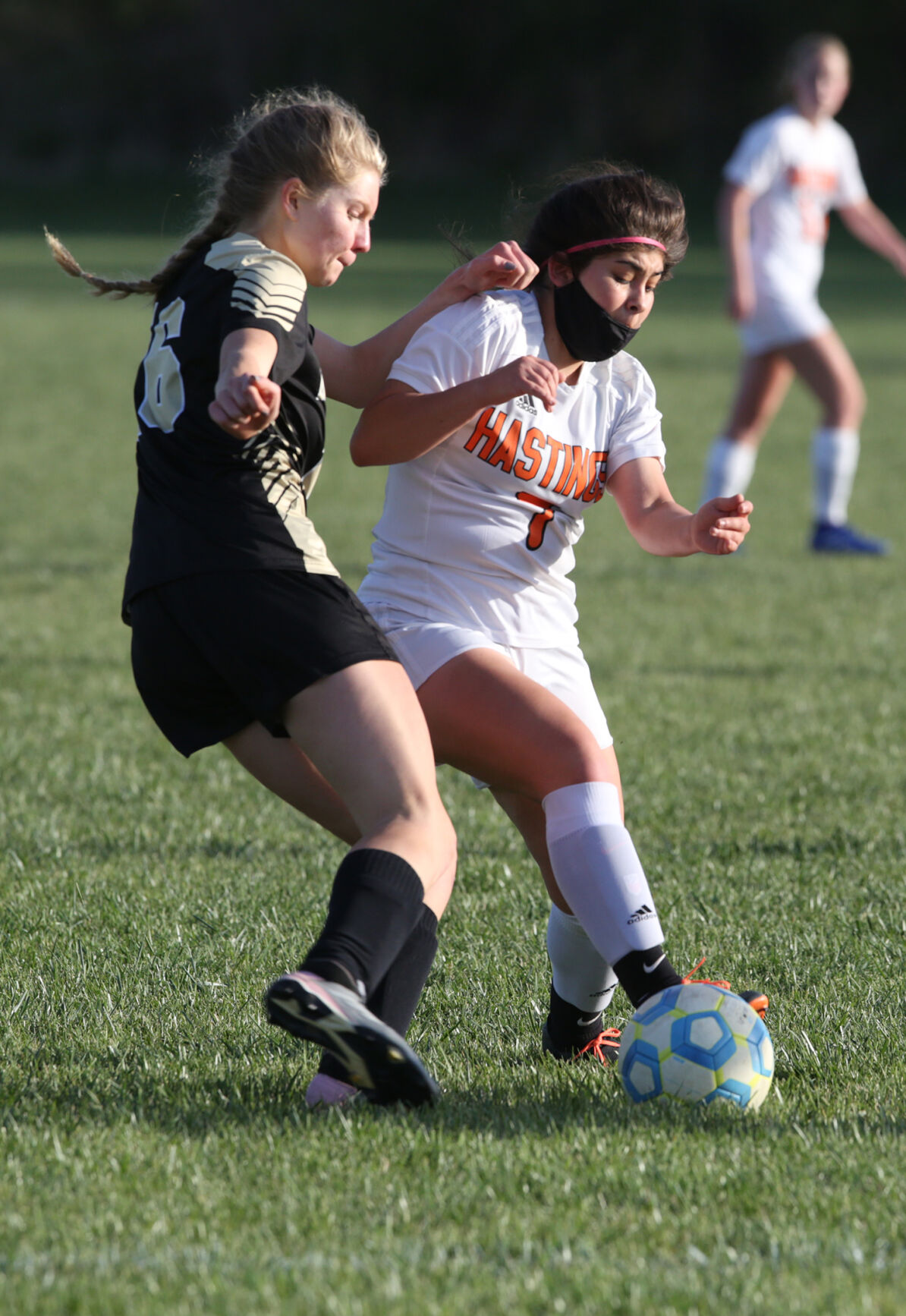 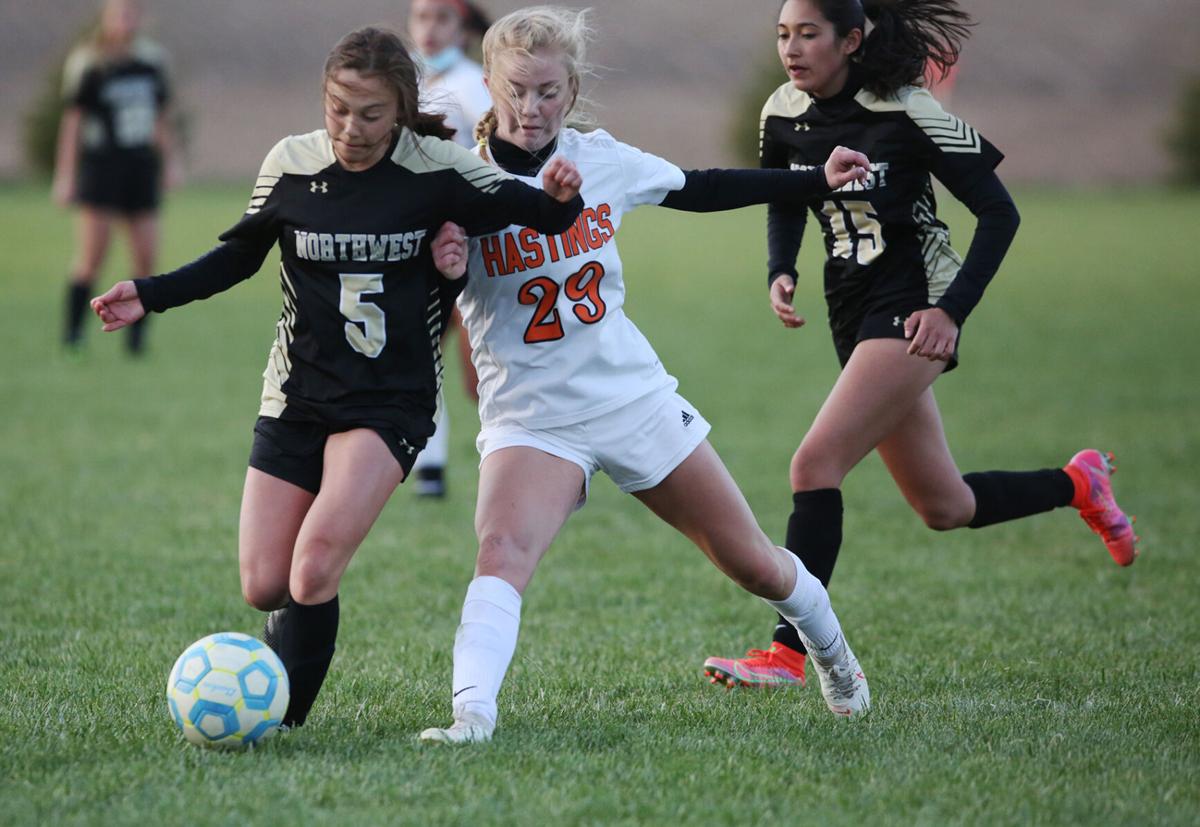 Hastings’ McKinsey Long is defended by Grand Island Northwest’s Alexis Lilienthal (5) and Ahdriana Medrano in their Class B, subdistrict 7 game Monday in Aurora.

AURORA — In a few years, Aurora’s Streeter Park won’t feel quite as windy.

It’ll be then that Hastings High, Northwest, Aurora, and Kearney Catholic — the four teams who played there Monday night in the Class B, Subdistrict 7 girls soccer tournament — will be able to better utilize the north side of the field.

The row of young spruce trees to the north separating the green grass from farmland will be grown in and more able to block persistent breezes like the one Monday evening.

It caused both of the subdistrict semifinals to be virtually one-sided.

“Whoever had the wind had the chances,” said Hastings High head coach Melissa Everson, whose team lost 4-2.

Her Tigers surrendered four goals in the first half to Northwest, which played with the wind at its back for the first 40 minutes.

In the earlier semifinal, a 100-minute stalemate that ended in a shootout in which the teams shot into the wind, Kearney Catholic claimed the upset victory.

Neither of those teams could use to the wind to their advantage, but Northwest did.

And, to its credit, so did Hastings. But not with enough urgency or time on the clock.

“We just ran out of minutes,” Everson said.

The Tigers trailed 3-0 after 12 minutes. Northwest’s Rylee Eschliman, who has accounted for roughly 60% of the team’s goals this season, scored the first two with the aid of stellar passing by her teammates.

Jessica Francis sent a through ball to Eschliman, who beat the Hastings backline and buried the ball in the right corner in the third minute.

Three minutes later, Eschliman received a well-placed pass from Maddie Arends on the middle of the pitch and again struck gold for a quick 2-0 advantage.

Northwest tallied its third goal in the 11th minute when Francis beat her defender on the left sideline, dribbled into the box and had her pass to Arends deflected to Lexie Lilienthal, who shot on goal and watched her shot clip the bottom of the cross bar and bounce in.

What followed was a 20-minute span of Hastings possessing on its half — the windy north side.

The Tigers (5-9), playing with a roster as healthy as it had been for much of the year, couldn’t bury any of the chances they had, partially due to the strong wind.

“That was kind of our story all year long,” Everson said of the Tigers’ scoring struggles. “But I think we finally, towards the end of the season, got to where we wanted to be. Good news is we have almost everybody coming back.”

Northwest converted once more in the 33rd minute on a defensive breakdown by Hastings where keeper Summer Parnell chased a shot out of net and her back line was forced to stand in. The line held firm until Parnell returned, but a timely bounce to Lilienthal allowed her to find sunlight amidst the many moving parts and finalize a 4-0 halftime cushion.

“To go down three goals real fast like that was tough,” Everson said. “But the one thing I’m proud of is we didn’t give up after that. To be 4-0 at half it’s pretty easy to give up, but they didn’t. They went to the last minute and that’s really all I can ask for.”

The Tigers exited their halftime huddle motivated for their turn to ride the wind. Emma Consbruck put Hastings on the board in the 48th minute with a lofty free kick over the head of Northwest’s keeper.

A minute later, McKinsey Long was denied by the crossbar. Then suffered the same fate in the 66th minute.

Long’s persistence was rewarded in the 76th minute on a beautiful vertical pass by Nizel Espinoza Nunez that led to HHS’ second and final tally.

Hastings beat Northwest 3-1 in a road game on April 22, answering the Vikings’ initial tally with three straight. But four goals proved to be an insurmountable amount Monday.