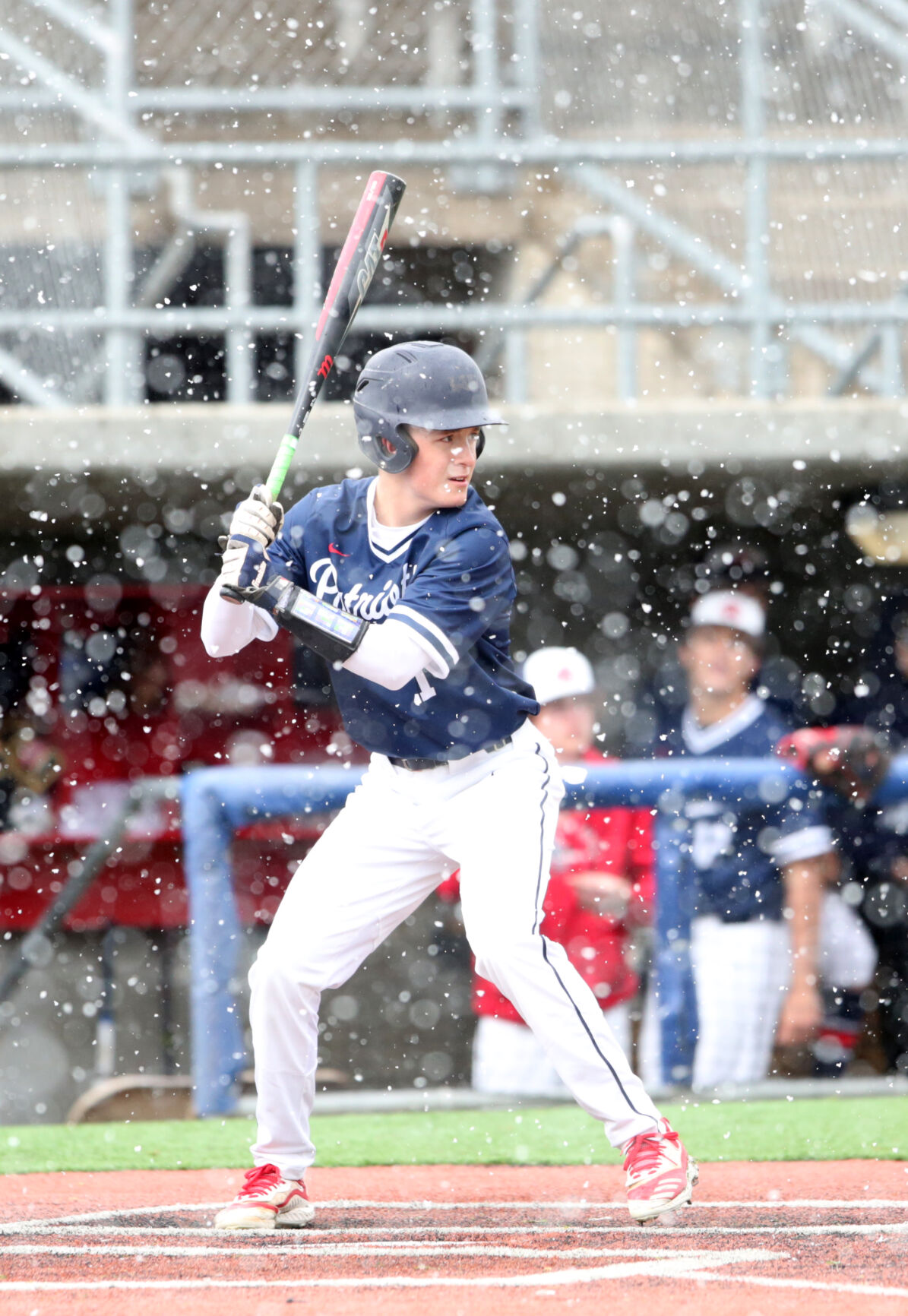 Adams Central’s Joe Peshek bats against Crete amidst a flurry of snowflakes Tuesday at Duncan Field. 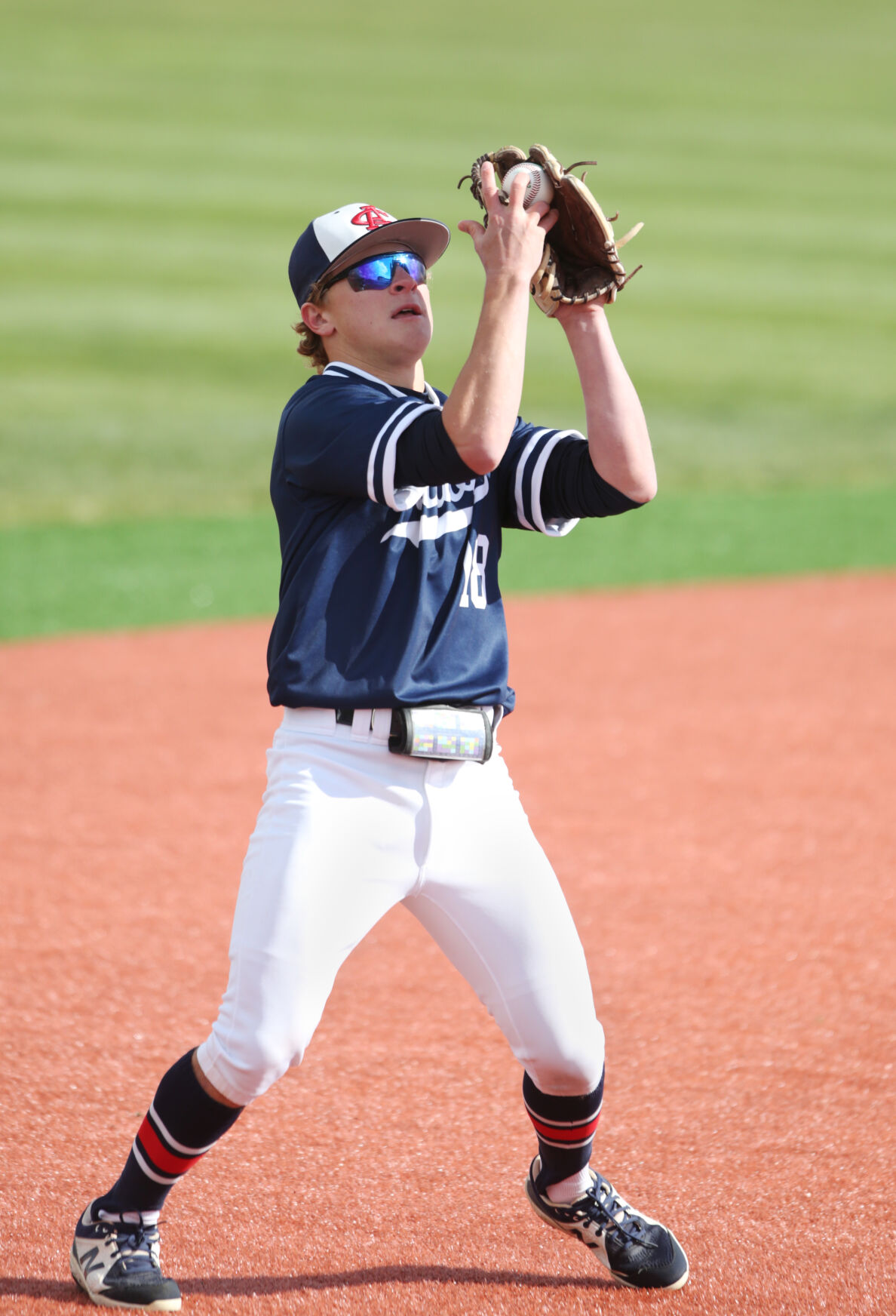 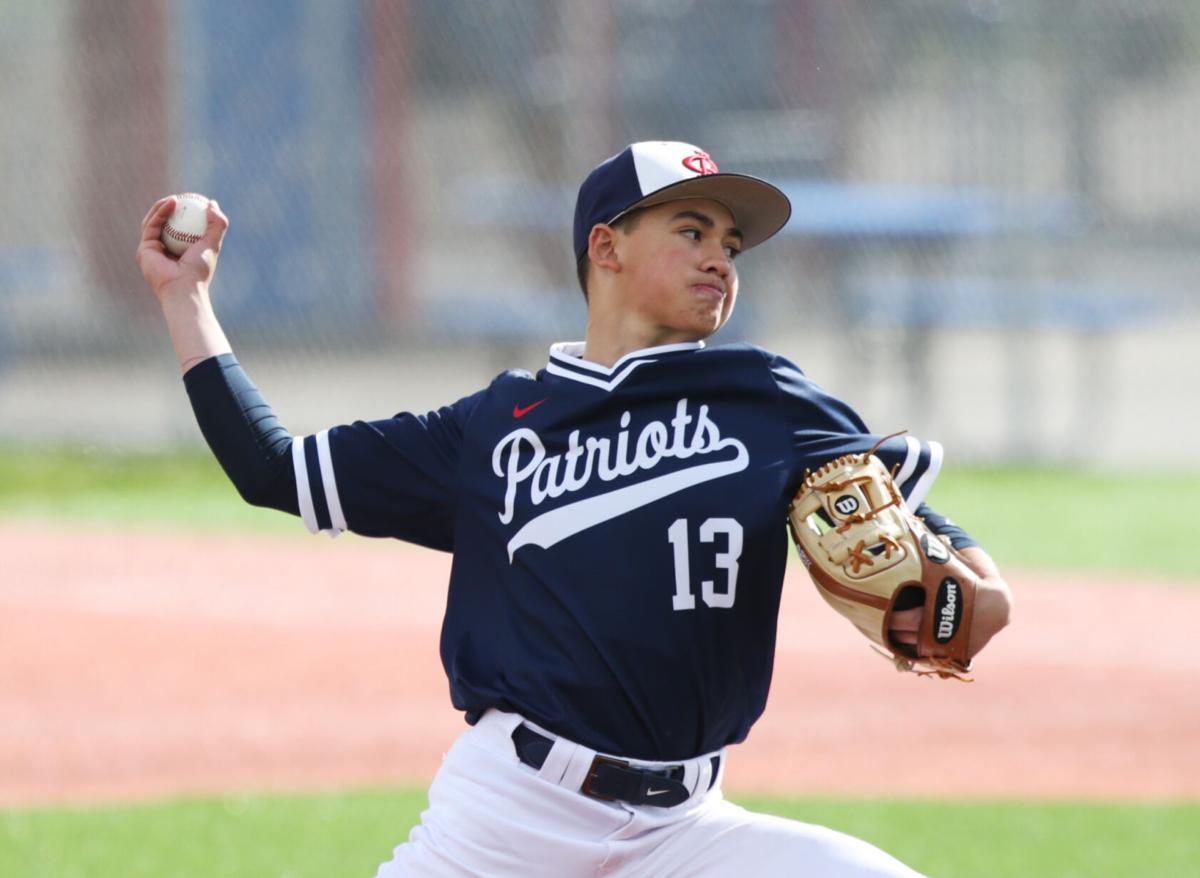 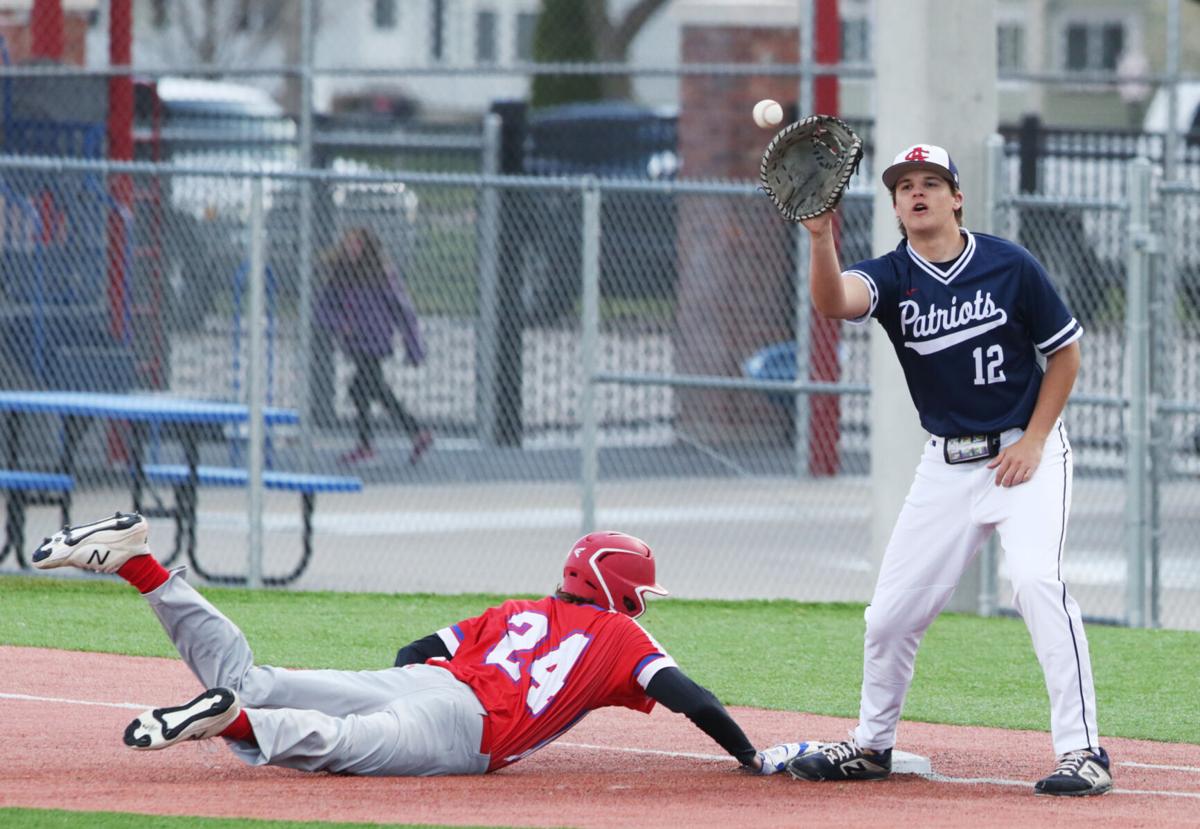 Crete’s Mason Crumbliss slides back to first base beating a throw to Adams Central’s Creighton Jacobitz Tuesday at Duncan Field. 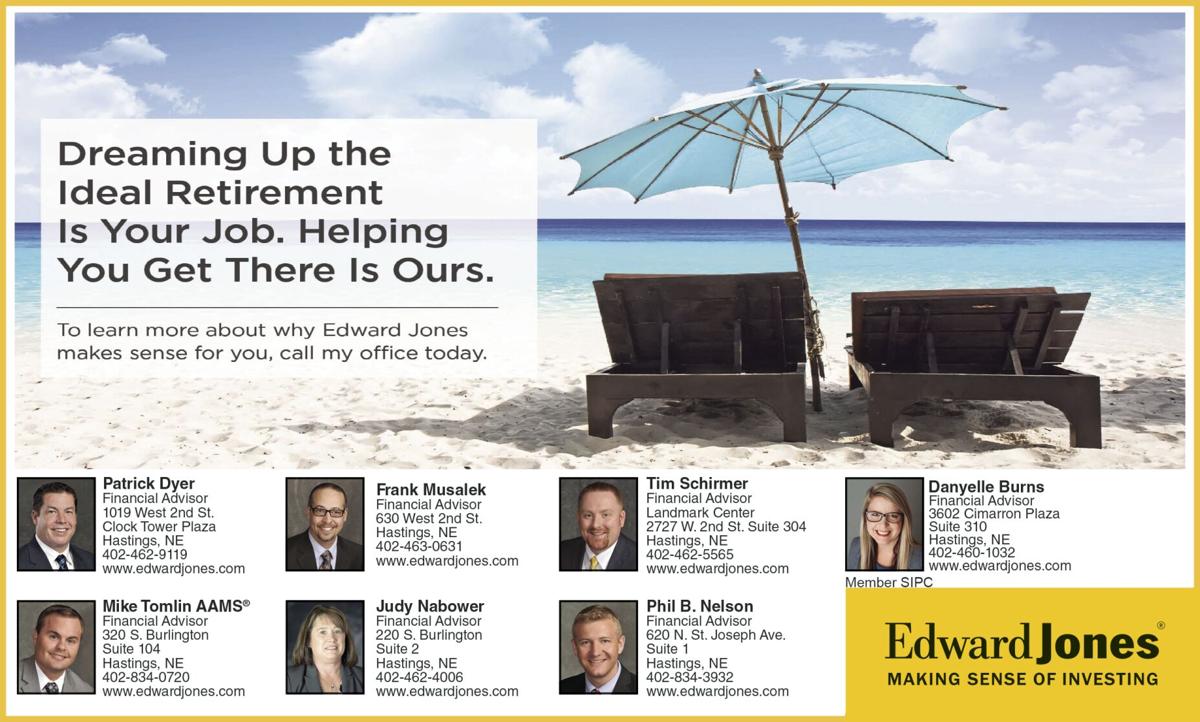 It’s not uncommon to have temperatures hovering around freezing and snow falling during the spring sports season. But it’s a little more rare to have it this close to postseason play, with baseball districts just two weeks away.

The overcast skies and fluffy white snowflakes gave way to sunshine as the game progressed and almost summed up the evening for the Adams Central baseball team. Tuesday’s game at Duncan Field looked gloomy early on, but the persistent Patriots persevered and clawed back into the game, winning on a walk-off in the bottom of the seventh inning, 5-4.

“It was a grind; twice we left the bases loaded in the middle part of the game,” said AC head coach Travis McCarter. “I’m proud of those guys for sticking with it. I told them that if we get on the basepaths there’s a lot we could do, and that’s what we did.”

“Perseverance is a big thing with our team,” said AC’s Macrae Huyser. “Never giving up — throughout the season, I feel like we’ve come through when we we’re behind — so never giving up is a mentality that our team has. As a cohesive unit, we do really well at that.”

The game got off to a rocky start when Crete took advantage of three hits, a walk and an AC error in the first half inning of the night. The outburst left the Cardinals on top 3-0 and threatening for more, but Lucas Gabriel was able to get out of the inning by striking out two of the last three hitters in the frame.

Adams Central also had a golden opportunity slip out of its grasp in the bottom of the frame; Crete’s Lucas Lenhoff walked three batters to load the bases with just one out. After a meeting on the mound, the Cardinals starter removed his longsleeve shirt from underneath his jersey and proceeded to retire the next two AC batters. The Patriots did manage to get one run, however, scoring on a sacrifice fly off the bat of Creighton Jacobitz to cut the lead to 3-1.

The big hit continued to elude Adams Central, as they stranded the bases loaded again in the third. In total, the Patriots stranded 12 runners on base, including 8 in scoring position.

Gabriel settled in after that rough first inning. He allowed just one run, which came on a sacrifice fly, over the next six innings. The Patriots’ starter finished with a line of seven innings pitched, three earned runs allowed and five batters struck out.

The AC hurler said what gave him confidence was actually his teammates having confidence in his own abilities.

“I came out and didn’t have my best stuff, and I knew that; but, I saw my teammates really wanting to fight and compete and it motivated me to throw better,” Gabriel said. “I started trying to throw more breaking balls, and I got more comfortable with it as the game went on.”

“He was feeling like he had to get four or five outs in an inning at the beginning of the game, but he didn’t let it get to him,” McCarter said. “He settled in and found his breaking ball. He was throwing his best pitching at the end of the game.”

Adams Central cut the lead to 4-2 on another sacrifice fly, this one off the bat of Macrae Huyser. And in the fifth inning, Hyatt Collins beat out an infield single to allow Joe Peshek to score and trim the Crete advantage to just one run.

Despite the Patriots’ absence of “the big hit,” they continued to chip away at the Cardinals until scoring the tying run in the bottom of the seventh, when Nick Conant scored on a Crete error.

With all of the momentum on its side, Adams Central put the pressure on the Cardinals in the final inning. Collins reached base when Crete’s shortstop had just enough of a bobble while fielding a ground ball to allow the leadoff hitter to reach. And, after Gabriel missed two consecutive bunt attempts, he put together an eight-pitch at bat to work a walk.

The base on balls resulted in Crete coach Jacob Cathey going to the mound to try to compose his team, but it also gave the Patriots a chance to put a plan into action.

“We had two of our fastest guys on the basepaths, and they’re never going to throw a guy out when (the pitcher’s) lifting his leg that high,” the AC coach said. “It looked like we were going to bunt and then we stole the bases. Then, we have our most experienced hitting at the plate with runners in scoring position at the end of the game, which is exactly what I wanted.”

The double steal worked perfectly and it allowed Huyser the chance to just put the ball in play and the winning run would more than likely score. On the fourth pitch of the at bat, Huyser lifted a ball to shallow right field, where the Cardinals’ defender made a great diving catch, but it also allowed Collins to hustle from third and slide head first into home for the winning run. It was the third sacrifice fly of the day for AC.

“(McCarter) just trusted me, having those guys on second and third, to drive them in,” Huyser said. “I knew they had faith in me, so I just put the ball in play...It was fun.”

Adams Central has now won three games in a row, and McCarter can see his team’s confidence growing with each victory.

“I think that carries over, getting that confidence and that experience in those situations. That’s pivotal at this point in the season,” McCarter said. “We have to continue to just ride that wave; ride that wave of confidence and keep putting the W up in the win-loss column.”