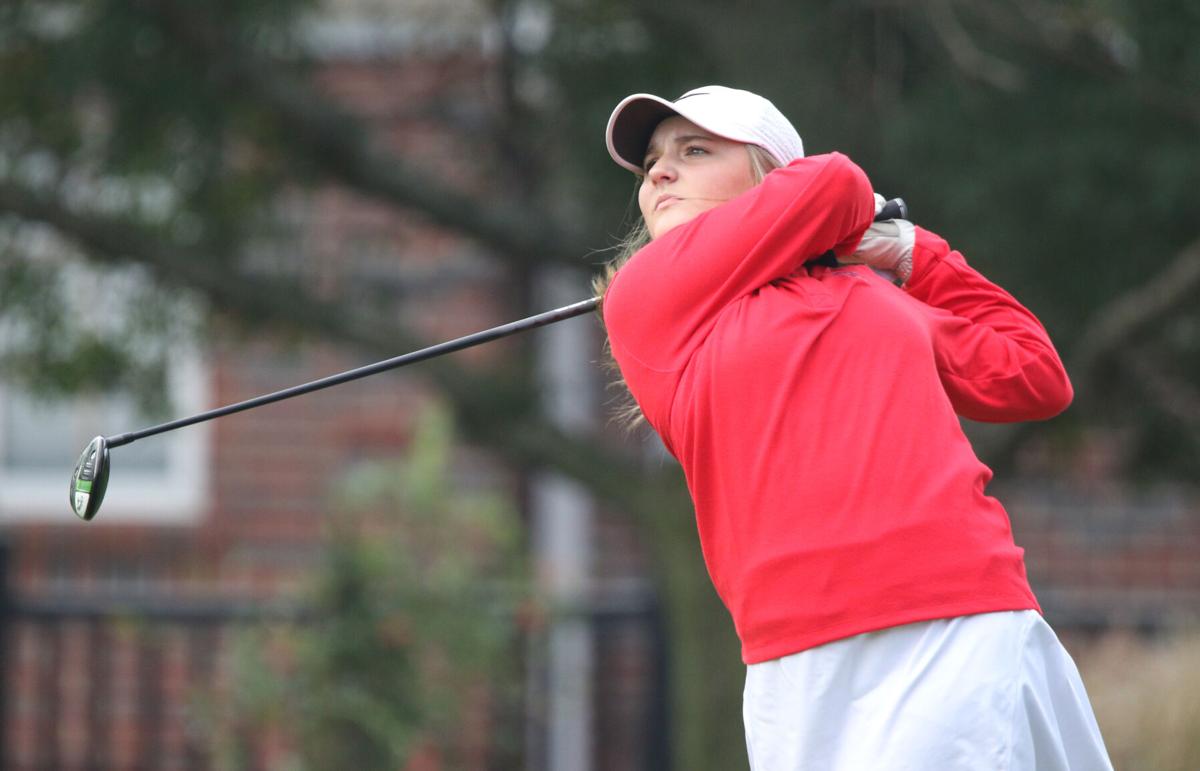 Adams Central’s Sidney O’Dey watches her drive off the second tee during the Hastings Invite Tuesday at Lochland Country Club. 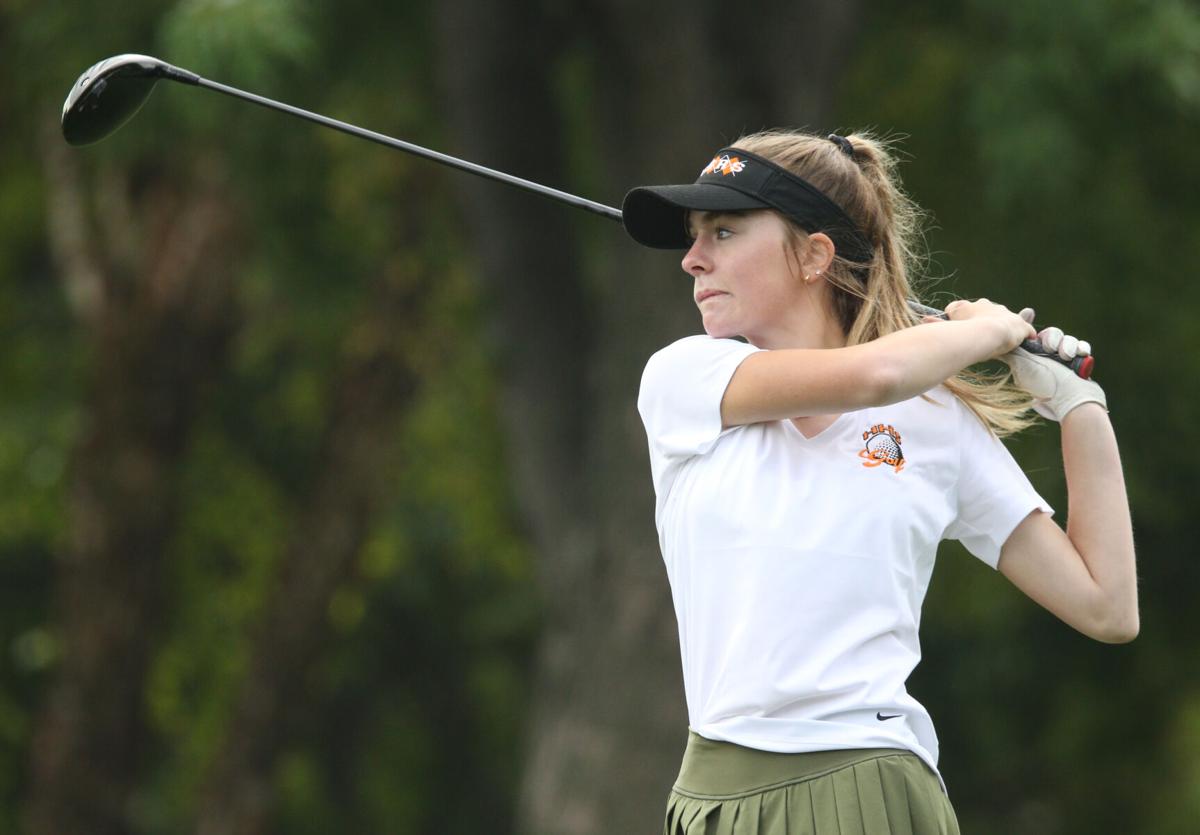 Hastings’ Anna Brant watches her drive off the second tee during the Hastings Invite Tuesday at Lochland Country Club. 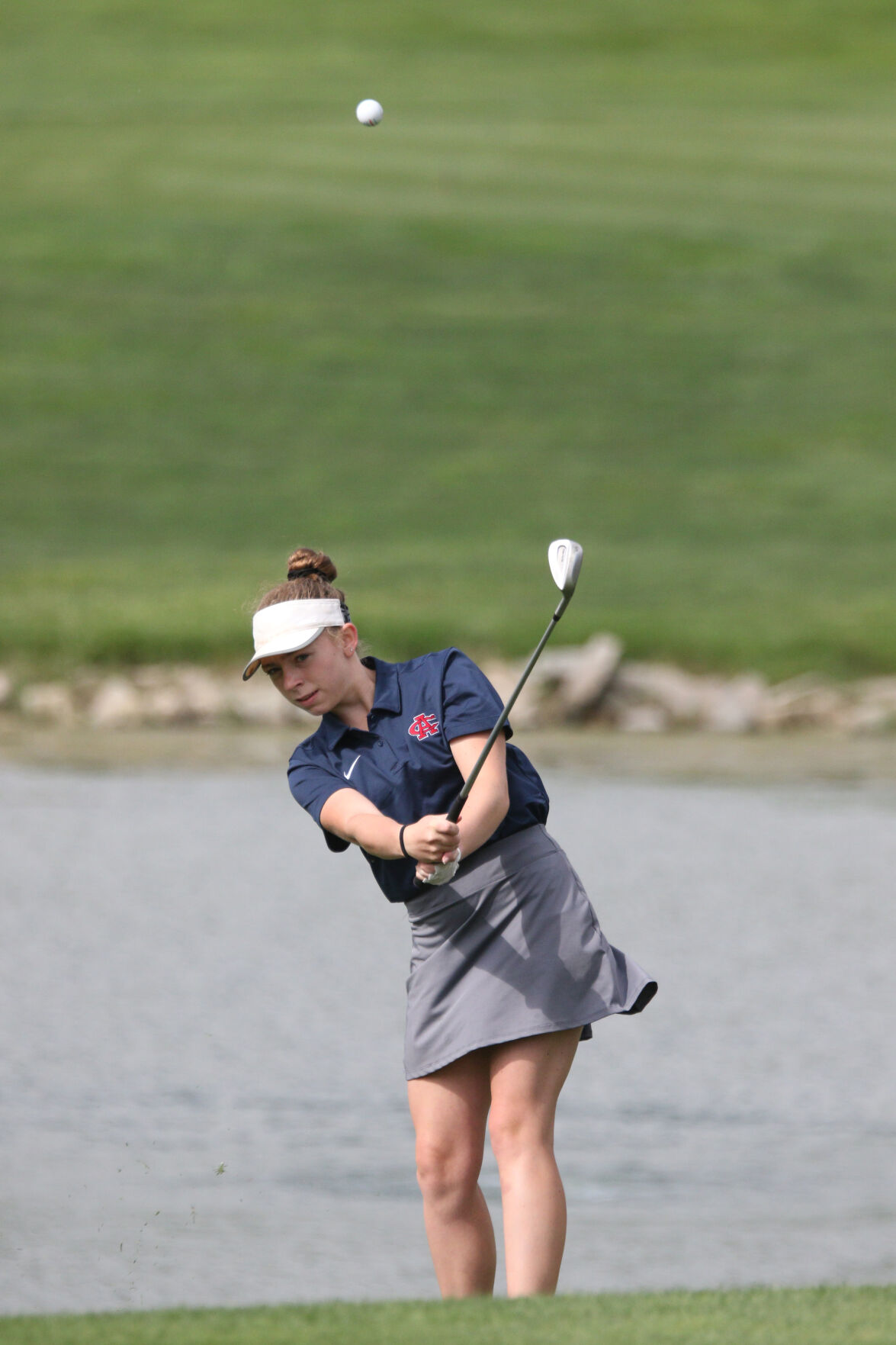 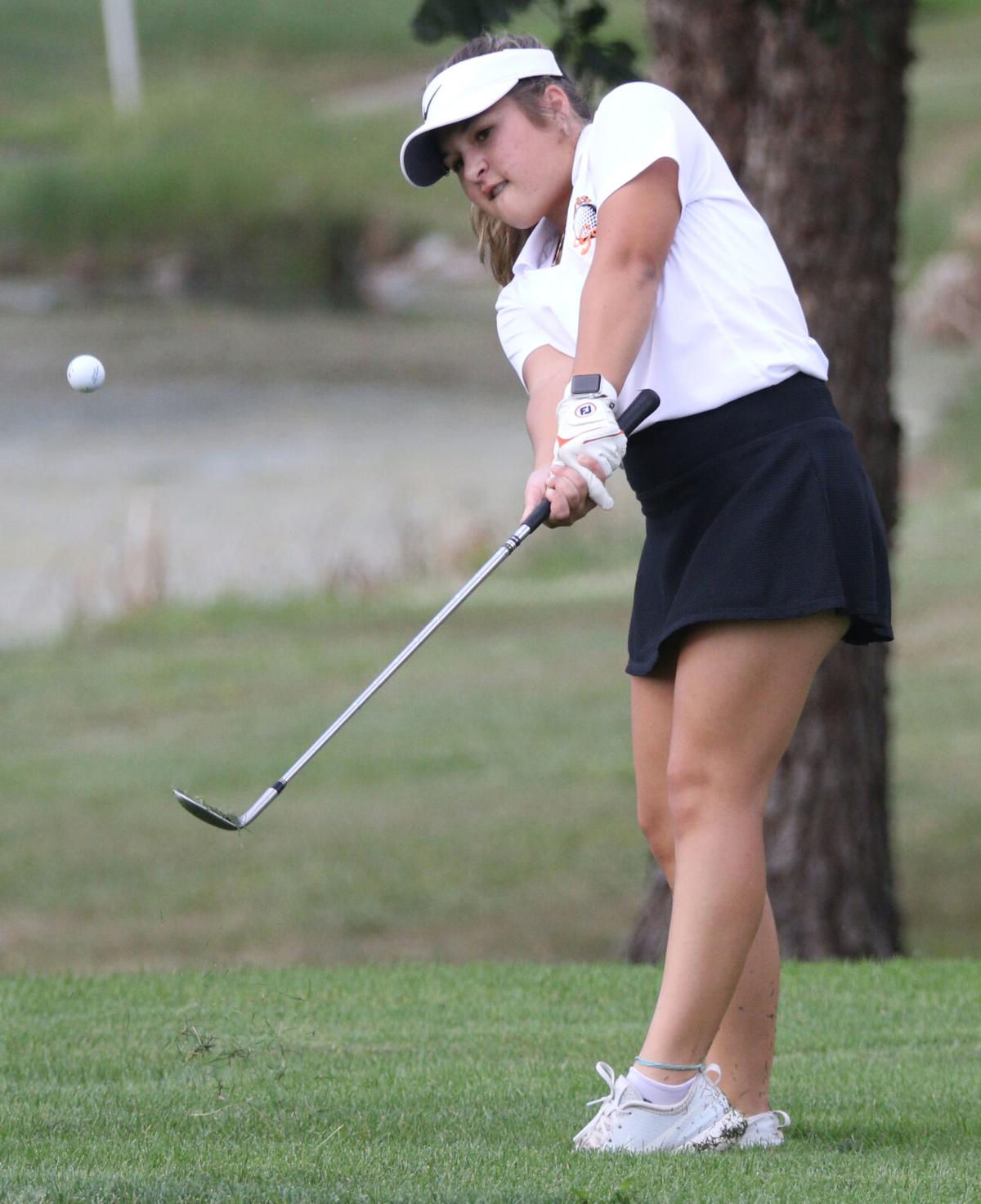 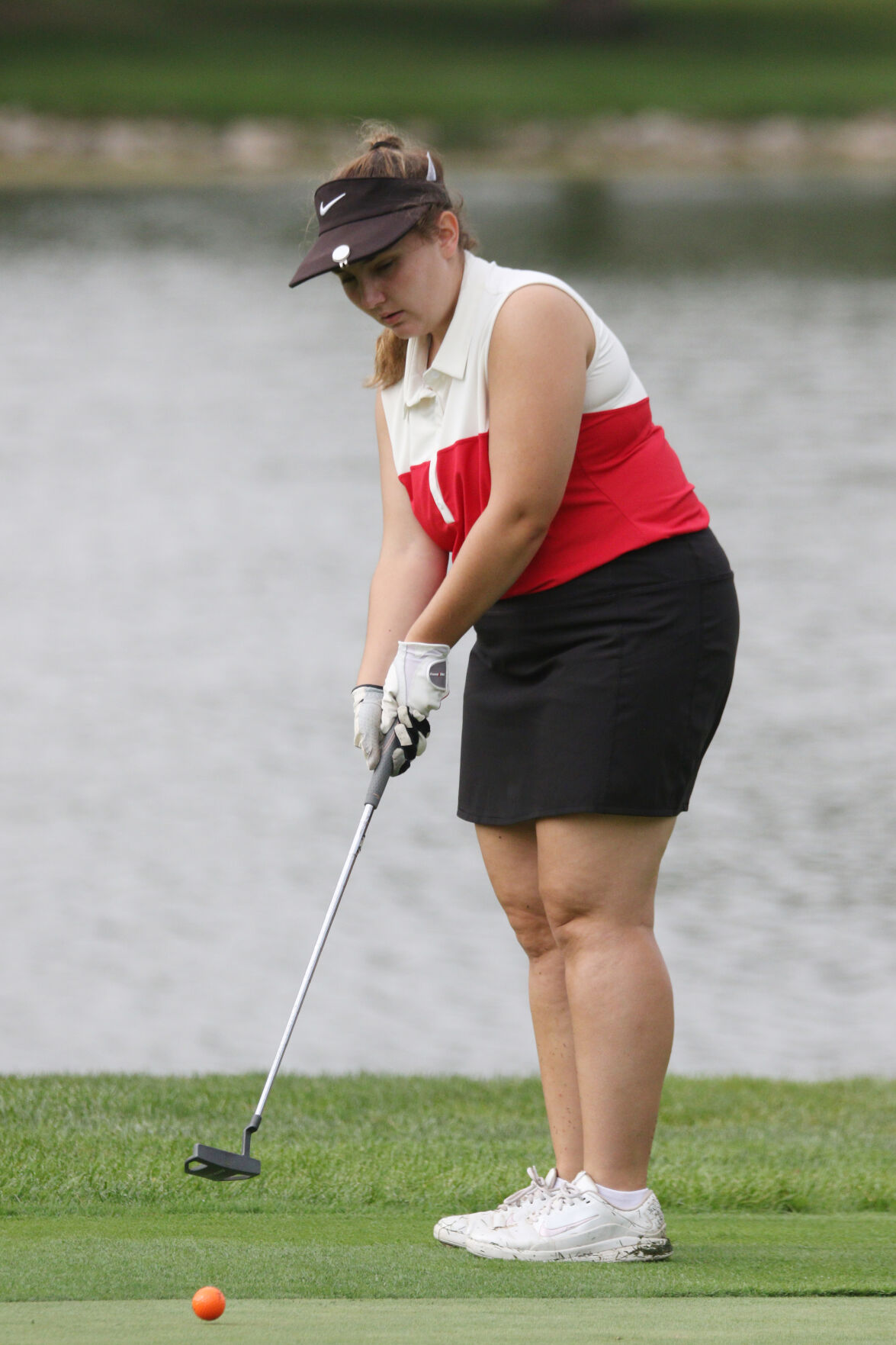 Adams Central’s Sidney O’Dey watches her drive off the second tee during the Hastings Invite Tuesday at Lochland Country Club.

Hastings’ Anna Brant watches her drive off the second tee during the Hastings Invite Tuesday at Lochland Country Club.

For any athlete of any sport to see real improvement, a determined work effort is required. But working on one’s skills and athletic ability isn’t enough; it is just as crucial that an athlete work on the mental aspect of the game.

Adams Central’s Sidney O’Dey has devoted time to improving her mindset on the course, and the Patriots’ No. 1 golfer saw that work pay off Tuesday at the Hastings High invite.

O’Dey has struggled in her previous rounds played at Lochland Country Club, but on Tuesday she shot a personal best, firing a 79 and finishing second individually.

“Lochland is not one of her favorite courses, but it’s nice to have a low score on a course that she’s struggled in the past with. She’s shaving off strokes during a great time of the year,” said AC head coach Katie Feezell.

“I was really nervous coming into (Tuesday) just because the last couple of times I’ve played this course, it hasn’t gone great,” O’Dey said. “I thought I wasn’t going to play well...but I felt like so much was going right that it kind of relieved my nerves.”

In last year’s HHS invite, O’Dey finished with a 104, but on Tuesday her putter helped her shave 25 strokes off of last year’s score as she trailed only North Platte’s Karsen Morrison — who shot an impressive 71 on the day. O’Dey said she got some new clubs this summer, and she’s really seen a positive impact from them. But, even more so than the clubs, O’Dey said her performance gives her a ton of confidence going forward.

“I’ve pressured myself to beat my sister’s (Hailey) school record of 75, so all year I’ve just been working towards little goals,” O’Dey said. “My goal had been to shoot 84, and I kind of laughed at that; I didn’t think it was possible. But when the putts are rolling in like (Tuesday), the score’s going to stay down.”

O’Dey’s teammate Emily Stoeger also saw dramatic improvements from last year’s outing at Lochland. She shot a 130 a year ago, but this time around she placed eighth with a 92, cutting 38 strokes off her previous score.

When the Patriots competed in the Tiger invite in 2020, O’Dey and Stoeger were the only varsity members of the AC golf team. This season, however, the Patriots boast 12 golfers in the program, and put together a full team on Tuesday for the first time in a very long time.

“We have 12 right now, and everyone’s making progress. We were excited to bring four to a meet and actually compete as a team,” Feezell said. “It’s awesome to see scores lowering, and we’ll have another one so hopefully we’ll get to bring five next time and have a good competition.”

Adams Central put together a team score of 390 to place fourth in the invite.

Hastings High’s Anna Brant can attest to the importance of a strong mental approach. She started the day experiencing a little trouble with her drive, but she told refused to let that effect the way she finished the round and ultimately the day, as she battled her way to fourth place after shooting an 85.

“It wasn’t pretty, but the score was good, so that worked out,” Brant said. “I can shave off some strokes, but it was good scoring for me. I kept it together pretty well and didn’t have any fall-apart-holes — just little mistakes here and there. But it worked out well.”

HHS head coach Rick Christy said Brant shortened swing after the length caused too many opportunities for error. He said the difference was noticeable, and while Brant may not have been hitting the ball quite as far, she was saving herself in the long run with the added control as a result of the change.

“I told her, ‘Anna, everything is too long. There’s so much that can go wrong if your swing is too long,’ ” Christy said. “She’s invested a lot of time and she wants to score. She deserves to be scoring better than what she was scoring (before Tuesday).”

Brant improved by three strokes, firing a 41 on the final nine holes, which was the fifth-best nine-hole score of the day. Leah Krings, Hastings’ No. 2 golfer, also earned a medal with her score of 97, which earned her 14th place.

The Tigers, as a whole, have seen improvement with each meet this season. Hastings started the year shooting a 460 as a squad, but it has worked its way down to a 407, as of Tuesday’s home meet. That new season-low earned the host squad a fifth-place finish.

“We’ve got talent, and we’ve got some young talent; granted, we don’t have a lot of experience and we don’t yet know what it’s like to really be in the arena, but maybe that’s a good thing for us,” Christy said. “The girls have some swings...I’m not going to say we have a lot of depth, but we have a lot at 4, 5, 6, and 7 that they push each other a little bit.

“It’s good to have that. We’ll try to improve and at least give us a chance at districts.”

“We’ve done, actually, really well and we’re getting better as a team,” Brant said. “It’s great because we’re all doing a lot better.”