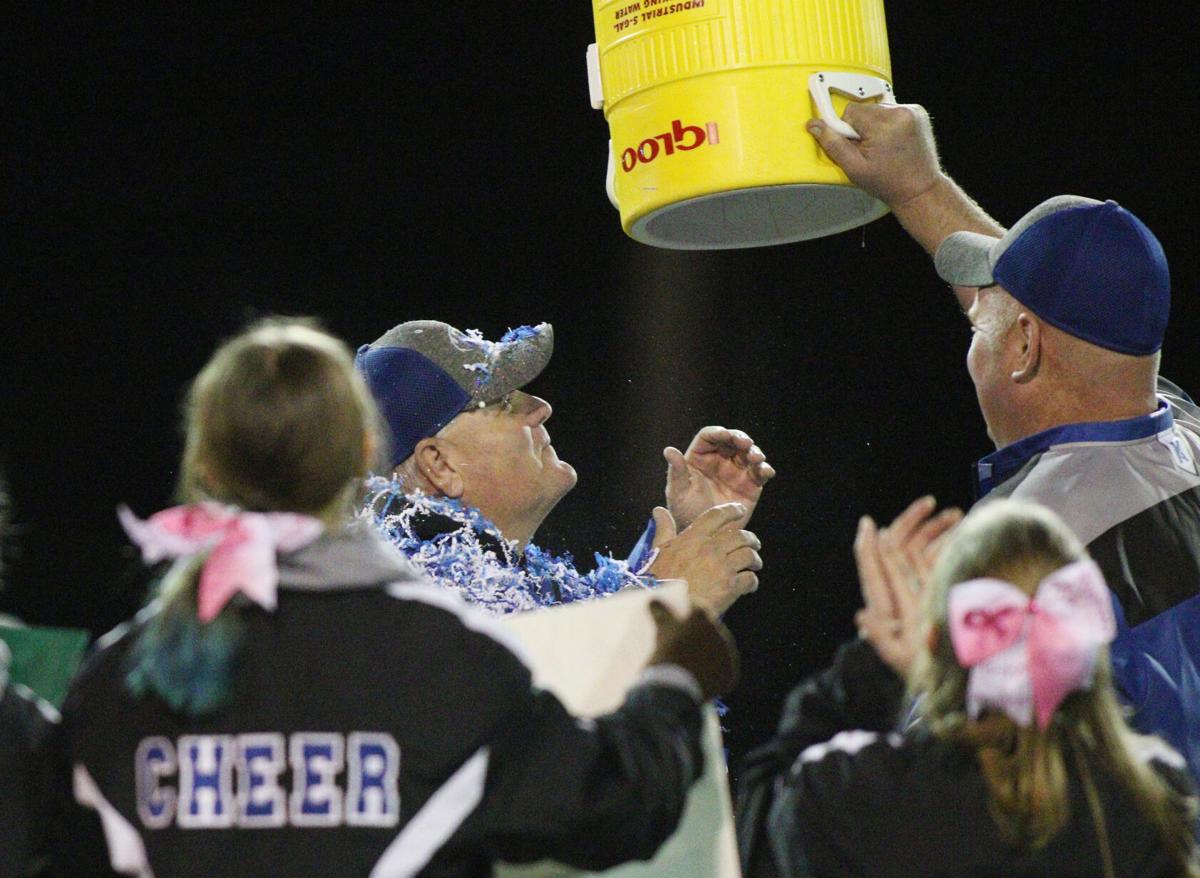 Kenesaw head coach Craig Schnitzler checks for more confetti during the celebration of his 150th win Oct. 29 in Kenesaw. 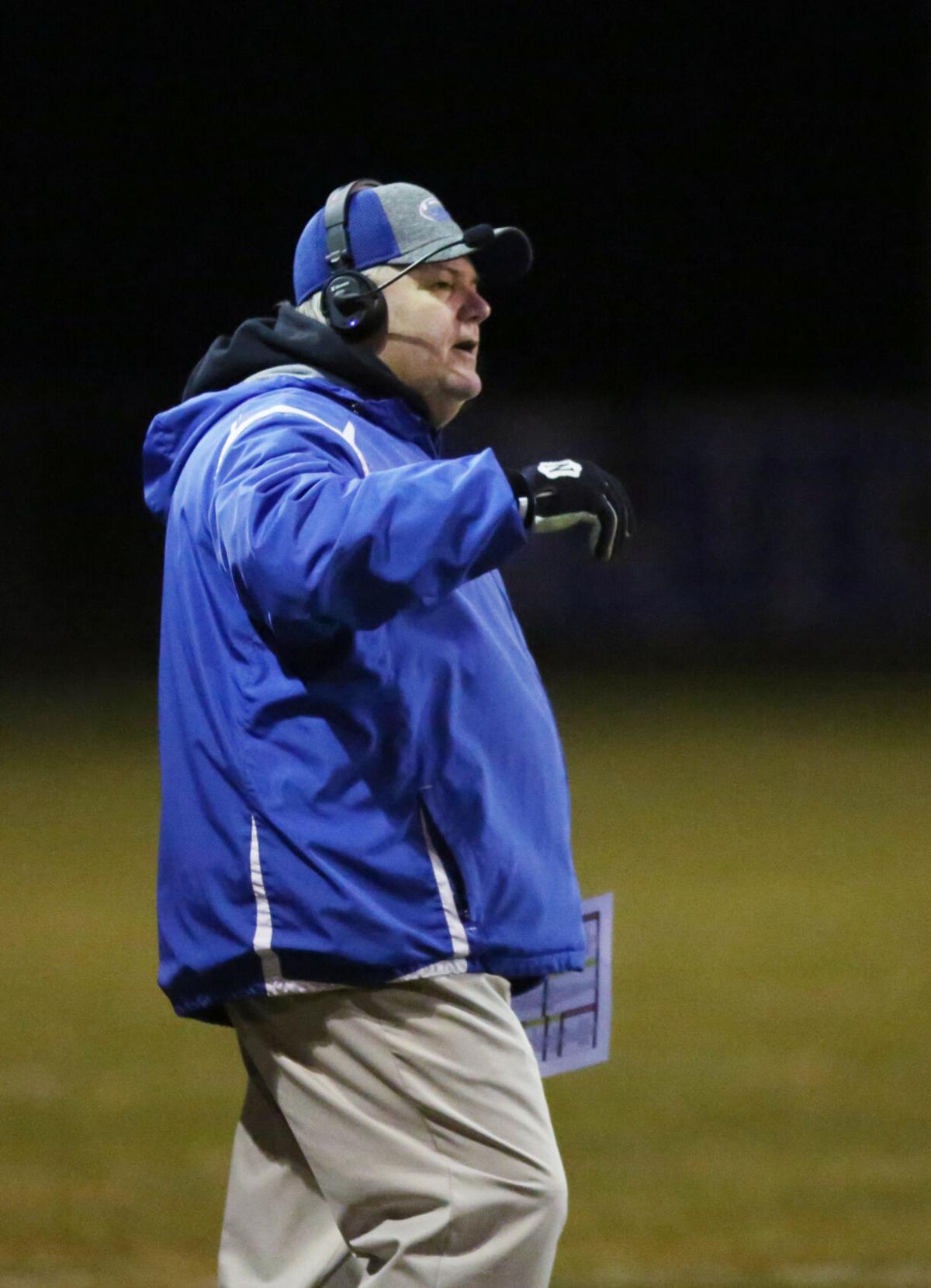 Kenesaw head coach Craig Schnitzler checks for more confetti during the celebration of his 150th win Oct. 29 in Kenesaw.

On August 15, the Kenesaw football team received a bullseye on the back of its jerseys in the form of a No. 1 preseason ranking from the Omaha World Herald.

Blue Devils head coach Craig Schnitzler allowed his team to relish in the moment, but then he warned the players of the intense demand that would be required for them to retain that “No. 1” by their team name for the duration of the season.

Kenesaw adhered Schnitzler’s advice, and it’s paid off. The Blue Devils have yet to lose a game and will put its unbeaten record and No. 1 ranking on the line in the Class D-2 state championship at Memorial Stadium on Monday.

“The kind of focus it takes and the preparation that it takes to handle that throughout the season — you have to prepare every week,” Schnitzler said. “There’s no such thing as a bad game and no such thing as a bad practice; you have to come ready every day because every opponent is going to want to knock you off. These kids took that to heart and they understood it. Every time we took the field, we were ready to play.”

The Blue Devils have had the right person leading them. Schnitzler has Kenesaw to 12 straight postseason appearances and recorded his 150th victory as a coach earlier this year.

More importantly for this season, Schnitzler has first-hand experience in being a part of a team that went wire-to-wire as the No. 1 team in the state. Forty years ago, Schnitzler was the quarterback at Battle Creek, as the Braves took a No. 1 preseason ranking and turned it into a state championship in 1981.

Schnitzler said that 1981 team has a similar mindset on offense: run the ball right over the opponent. Though, the former Braves’ quarterback lined up under center much more often than Kenesaw QB Tyson Denkert, who primarily works out of the shotgun formation.

“Shotgun, I don’t think you even heard of that back in the ’80s,” Schnitzler said.

The Blue Devils’ head coach was also Battle Creek’s placekicker that season. His field goal in the first half proved to be vital in the state championship, which the Braves won 17-14 over David City Aquinas.

Schnitzler of course remembered kicking the field goal, but he also quickly brought up the fact that he fumbled the ball inside the Braves’ own 5-yard line. The humble QB and coach then tried to gloss over the fact that Battle Creek went on a game-winning drive with just minutes remaining in the fourth quarter.

A fourth-down conversion on a pass play from Schnitzler to older brother Robb set up the go-ahead score, an 8-yard touchdown run by Marty Mullins on an option play.

“It was a read option; I rode the fullback from 0 hole to C gap then pulled and pitched to option guy and he went untouched to corner of the end zone,” Schnitzler recalled. “We had some speed backs. Both went on to play at Nebraska.”

Schnitzler himself also went on to play for the Huskers, as a kicker. He is very familiar with the emotions involved as a player running onto the field at Memorial Stadium. Now, more than 30 years after graduating from the University of Nebraska, he’ll be taking the field as a head coach, looking to win Kenesaw’s first state championship.

“In our case, it’s our first time in 30 years for Kenesaw. It’s very special to be doing this, and I really look forward to the atmosphere. We have a great fanbase and it should be an exciting ball game.”

The Blue Devils’ only other state championship appearance was in 1990, led there by head coach Leland Skeen, who was Schnitzler’s predecessor.

Schnitzler doesn’t remember the how many butterflies he had in his stomach before Battle Creek played for the state championship, but he’s sure he had some nerves running through his body that day. As a coach, he’s been just as nervous before each game throughout the postseason.

“This game (on Monday), I know I’m going to have butterflies; I’ve had butterflies every playoff game,” he said. “You just hope for the best and hope you have your players in the right position and ready to play. Then, it’s up to them. You just turn the game over. I make the offensive play calls, but those kids have to execute, and that comes with confidence and repetition.”

Schnitzler wants his players to be in a position where they can relax and stay focused on the task at hand while still being able to enjoy the moment. He said two of the most important things a player can do is take in the whole experience and “play their hearts out.”

For the Blue Devils’ senior class, it will be their final game on the field with the Kenesaw K on their helmets. The group has played a huge role in the program’s success over the last four years, and Schnitzler said it’s only fitting that their last game will be for the state title.

“(This team) has been driven by our five senior leaders, who have been in the playoffs four years now,” he said. “This is the one that they’ve been working towards. It’s awesome to see the way it’s played out.”

You could argue whose road was tougher to Lincoln, whose playmakers make better plays, whose coach is more experienced and in what capacity, o…