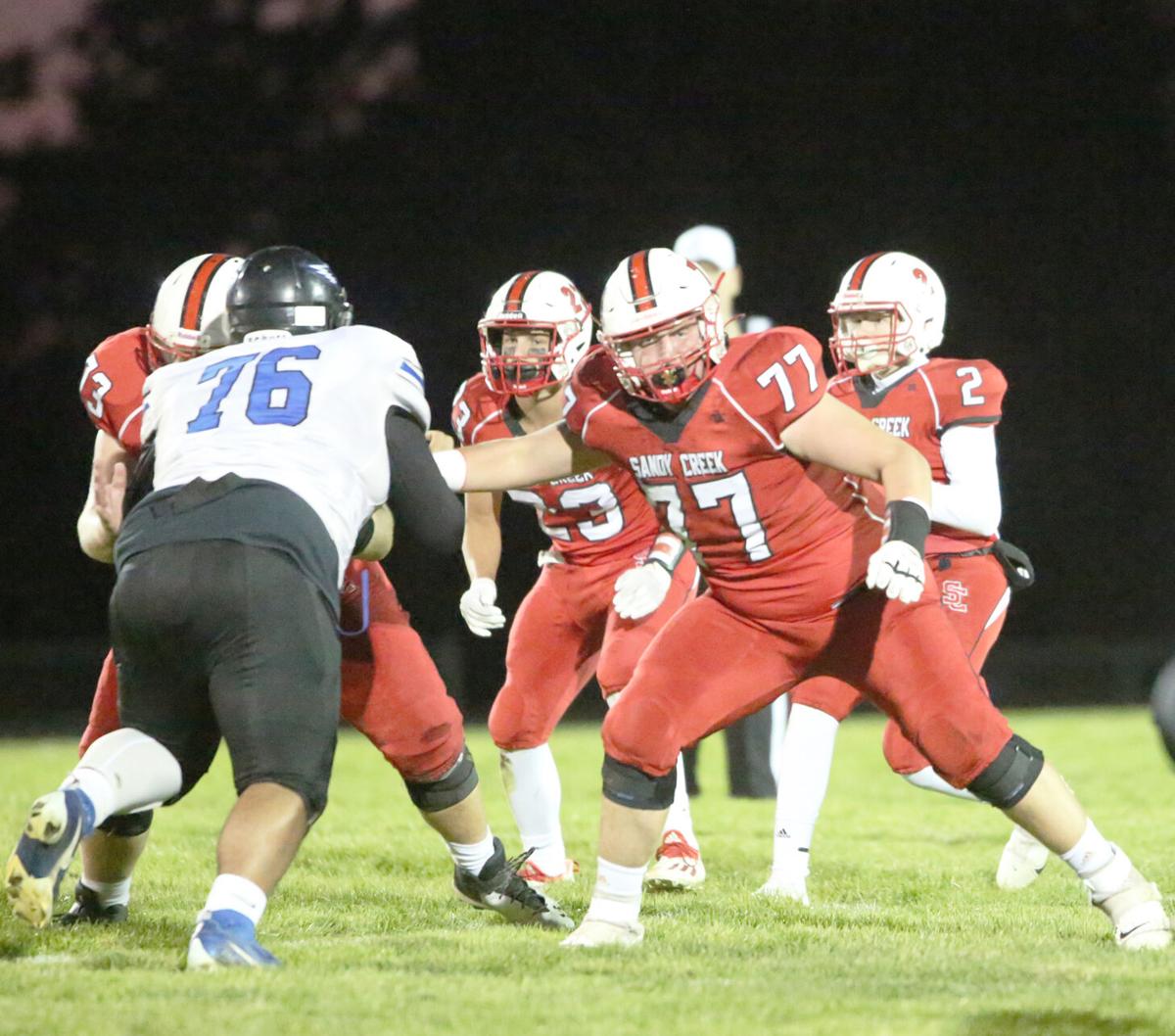 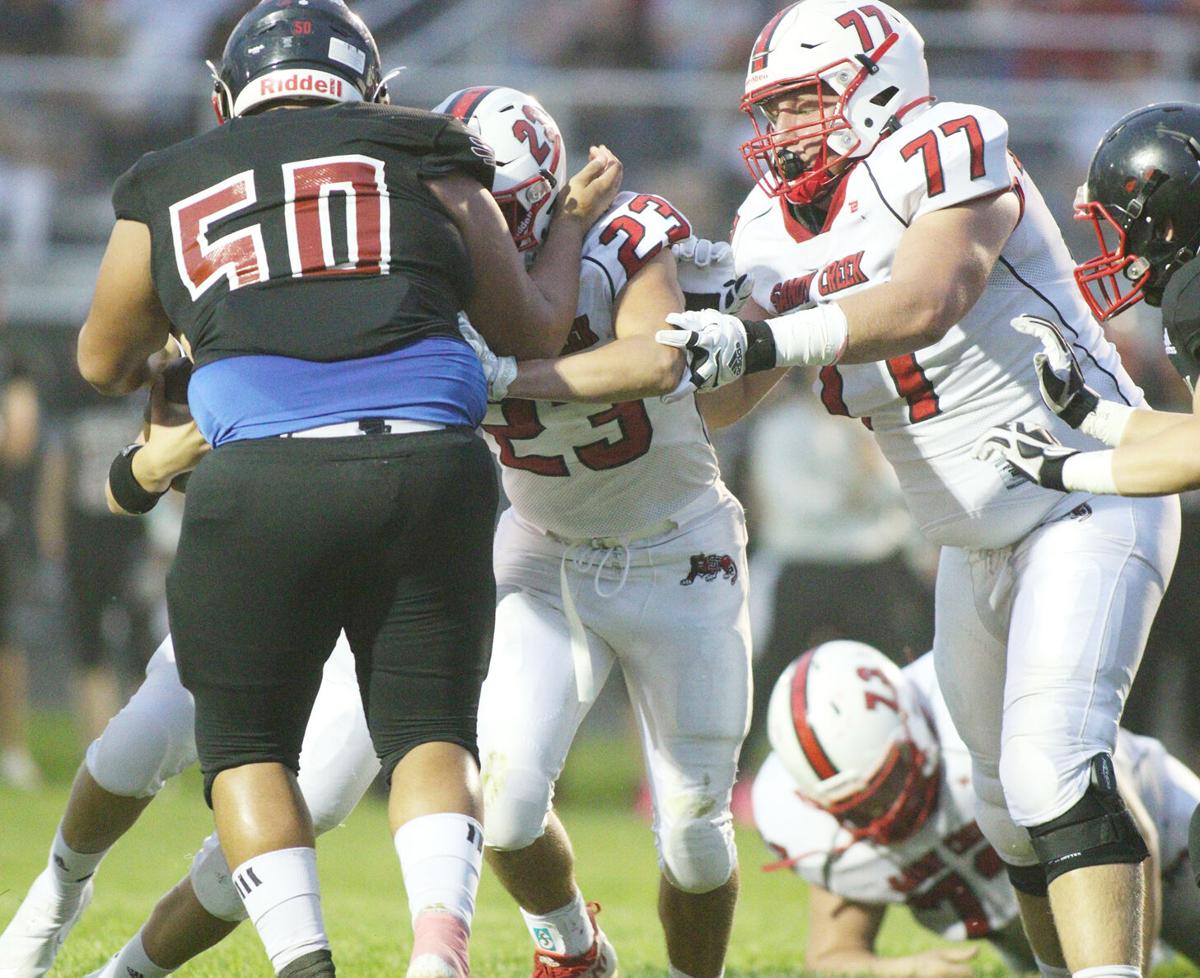 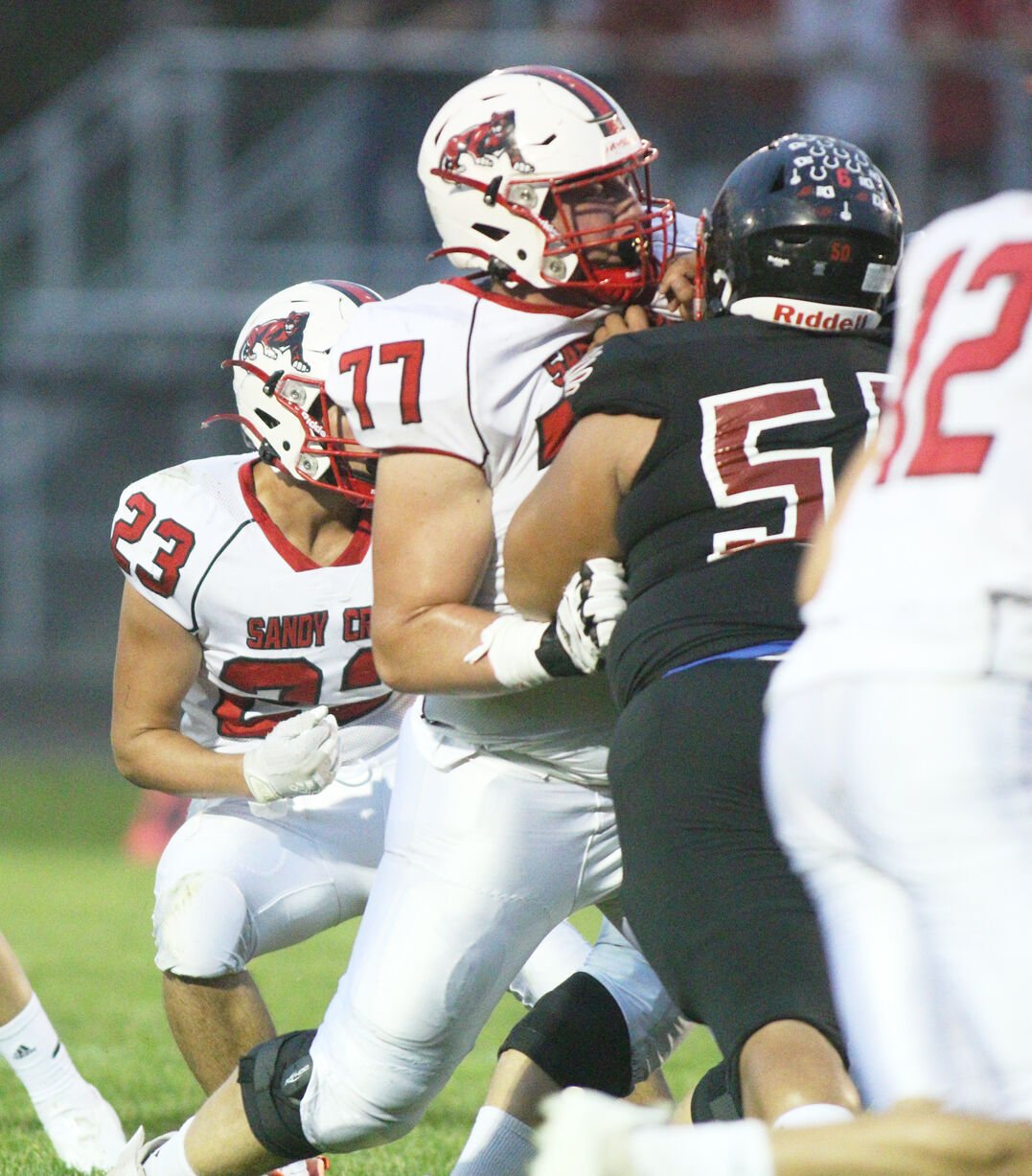 Sandy Creek’s Josh Shaw stands up a Doniphan-Trumbull defender in their game on Oct. 8 in Doniphan. 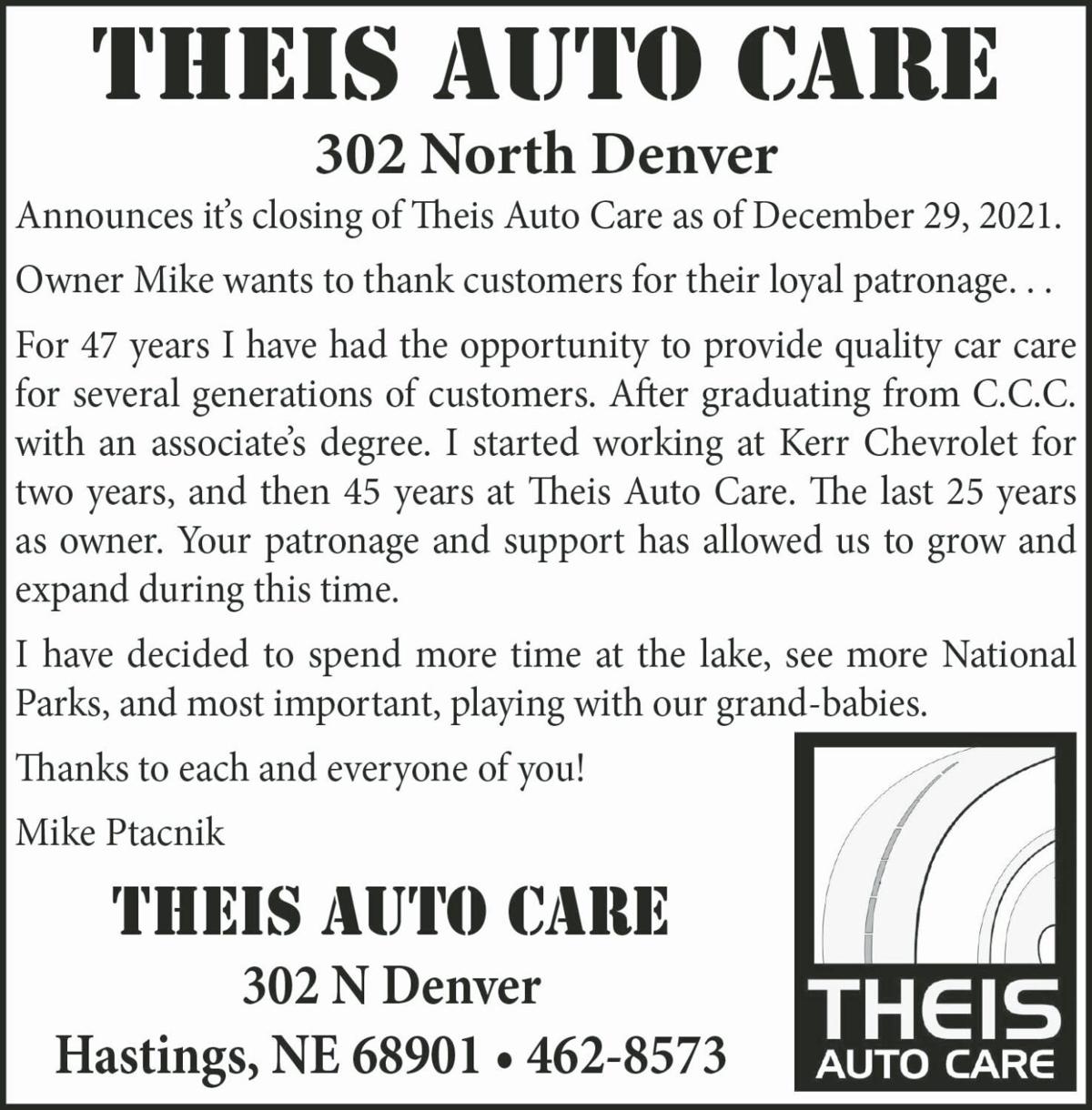 Sandy Creek’s Josh Shaw stands up a Doniphan-Trumbull defender in their game on Oct. 8 in Doniphan.

There are a lot of football players who don’t get enough credit for their work ethic. The talented players that put in all the work behind the scenes and get to shine in the spotlight on game day, where everyone can see the fruits of their labor — that’s the ideal scenario, right?

Those are special players, and they’re definitely in the minority. But what about the players that do everything they’re supposed to do and work relentlessly on the field, in the weight room and in the classroom, and then almost never get the recognition they deserve? What about the linemen?

Sandy Creek’s Josh Shaw is one of those players. When he and the rest of the Cougars’ offensive line do their job, it’s the running back or the quarter back celebrating a touchdown in the end zone.

Those players that rack up the touchdowns know they couldn’t do it without the players up front; that’s why they appropriately credit their line in the postgame interviews. The blocks may not always show up in the box score, but Shaw said it’s not recognition that makes him train to be the toughest lineman in the area. His dedication is tied directly to what’s best for the team.

“Everyone that plays football knows that games are won and lost in the trenches,” Shaw said. “I just keep going trying to do my part and work as hard as I can at the line, knowing it will help the rest of the team out. I just want to do as much as I can and get the other guys around me on the line to know that the game depends on how well we play. Knowing the success of the team is dependent on that is what keeps me going.”

Shaw received the recognition from opposing coaches. Foes knew they had their hands full with Shaw even before they lined up against him on the gridiron. His physical attributes and mental awareness and attention to detail made him a force on the field, as he earned the title of Tribland 11-man Player of the Year.

“Josh was a very central part on both sides for us, offense and defense,” said Sandy Creek head coach Jack Shadley. “He’s been a great leader ever since his freshman year. The guys have looked up to him and he’s done...everything he can to put his team in the best position to be successful.

“He’s usually the first one to practice, to the weight room and the last to leave, getting extra reps in practice or extra sets in the weight room. He’s just a great overall kid and definitely well deserving of the honor.”

Shaw has been an integral part of the Cougars going from a winless team in 2018 to a team that was on the verge of a playoff bid this season, before losing its final game.

The Cougars’ senior acknowledges making the postseason was a team goal this season. Even though Sandy Creek fell just short of accomplishing that feat, Shaw is proud of what he and his teammates were able to do in terms sending the program in the right direction for the underclassmen.

“That’s super important to me,” he said. “Just trying to change the culture and set the standard for what we’re hoping Sandy Creek football is to become. We want to show younger guys and the younger generation how to do things the right way, so it’s important for us to do stuff the right way and see improvement.”

Shaw has done things the right way. His coach said he’s typically the first to practice or in the weight room, and he’s constantly staying after for one more rep or one more set. Shadley said Shaw is exceptional in the classroom as well. His ability to study the opponent isn’t too shabby either; in fact, Shadley said it’s one of the biggest things that sets him apart from other talented players.

“Through all the work that he’s put in since he’s been in junior high, just learning the game, learning the terminology, the technique, the proper way to do things, watching and studying the game, studying film — just all the little things that nobody does as thoroughly as Josh has done the last five or six years,” the coach said. “He’s done a tremendous job putting himself in a position to be successful.”

Shaw said he studies the offensive and defensive tendencies of the opponent as well as his own team. He’s most comfortable when he knows not just his own role on each play, but the role of each of his teammates.

“Having that football IQ and knowing the overall schemes of things has helped put me in position to be a decent player,” as he modestly put it.

Shadley said it’s that dedication to being mentally and physically prepared for anything and everything on the field that draws the respect of his teammates and even his opponents.

Shaw stands at 6 feet, 4 inches, and is 265 pounds. His stature alone is enough to draw interest from a coach at the collegiate level, but you couple that with his athletic ability and his intelligence on the field and you’ve got an offer in the mail.

The Cougars’ standout hasn’t made his decision on where he wants to continue his academic and athletic career just yet, but he said the list of destinations is thinning.

“I kind of have it narrowed down to some of the schools I want to go to, but I guess we’re still kind of waiting,” he said. “I’ve been keeping in contact with some coaches and I’ve been down to a few campuses this fall — UNK, Northwest Missouri State, Nebraska are a few of them that I’ve been on game day visits so far.”

Shaw said the process is fun but it’s also strenuous. But he’s trying to focus on the positives before making his decision.

Shadley knows Shaw will bring his incredible work ethic with him wherever he goes for college. With that in mind, the coach has nothing but confidence that his former player will have a great football career at the next level.

“You don’t see somebody with that speed, strength, and football IQ all put together in one person very often, especially at our level,” Shadley said. “It’s been a lot of fun to work with him and watch him grow the last four years into the player that he is today.

“He’s a lot of fun to be around. He’s not the loud guy; he’s kind of shy and reserved and doesn’t talk a lot. But when you do get him to open up he’s a funny kid. He’s just fun to be around...He knows when to be serious and knows when we can loosen up and joke a little bit.”

Denkert's title run nothing short of heroic on the gridiron

It’s a common figure of speech to label someone as a “Swiss army knife” when that person is above average at several tasks or skills.