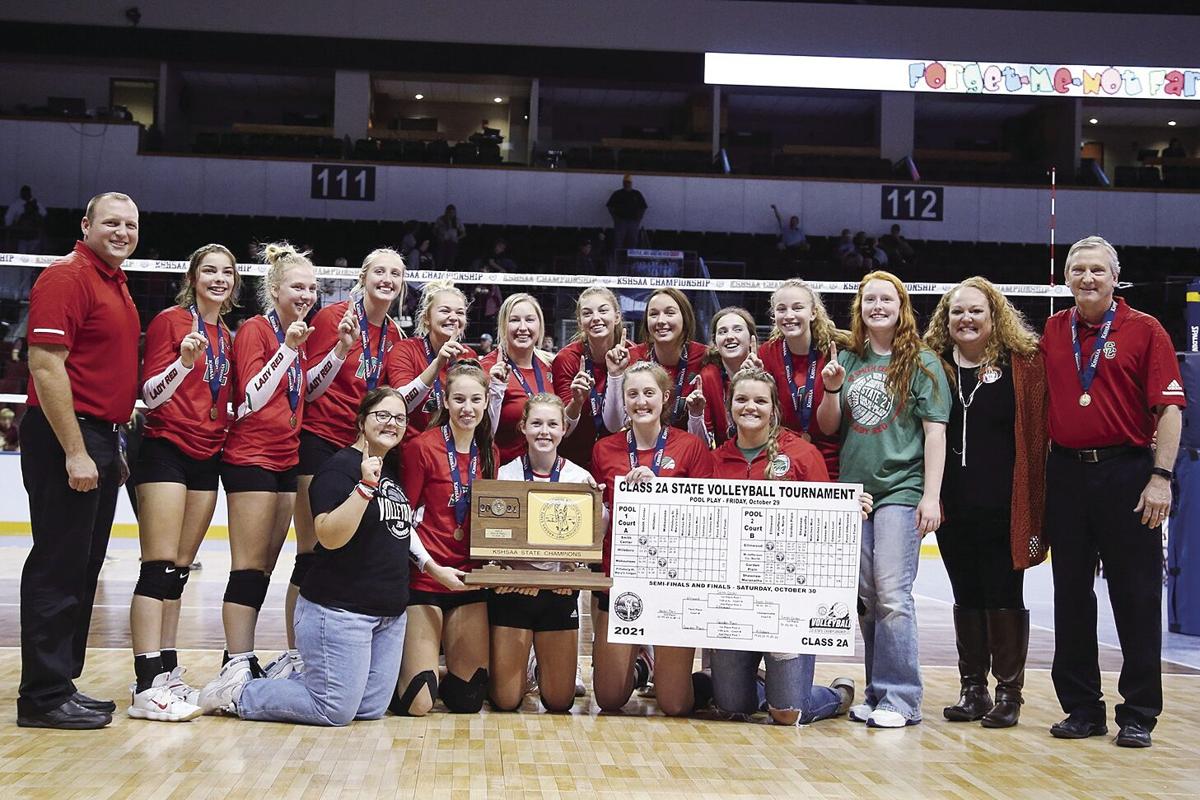 Smith Center won the Kansas Class 2A state volleyball tournament Oct. 30. The Lady Red finished the season 43-2, a year after falling short in the title game. 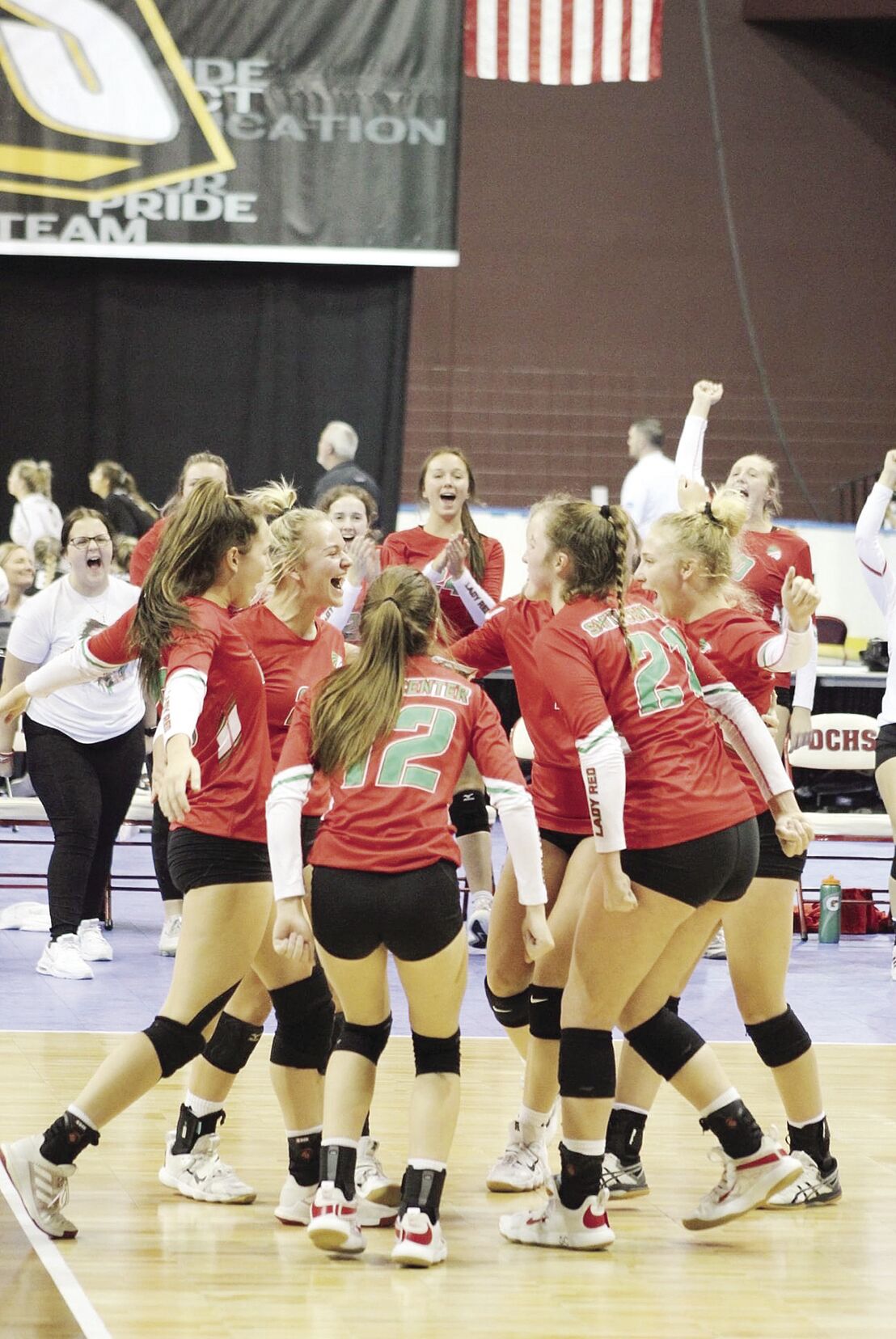 Members of the Smith Center volleyball team celebrate during the Class 2A state tournament in October. The Lady Red defeated Hillsboro for the title.

Smith Center won the Kansas Class 2A state volleyball tournament Oct. 30. The Lady Red finished the season 43-2, a year after falling short in the title game.

Members of the Smith Center volleyball team celebrate during the Class 2A state tournament in October. The Lady Red defeated Hillsboro for the title.

Smith Center’s head volleyball coach, who has more than 900 career coaching victories in 36 years, finally reached the pinnacle of the sport.

It happened via the fourth straight state tournament appearance and the eighth time the Lady Red reached the final four under Linn.

A year after falling short in the Kansas Class 2A state final and compiling what was, at that time, the best season in program history with a 36-8 mark, the Lady Red doubled down and captured the 2021 championship.

“I’ve got numerous ‘just not quite’ (seasons),” said Linn, who guided the Smith Center girls basketball team to the 2013 title. “I’ve got some seconds, thirds and fourths and now this one.”

It was an even better season, too, a 43-2 record stamped on the winner’s trophy following the sweep of Hillsboro in the Oct. 30 best-of-three championship played in Dodge City, Kan.

Although it was a long time coming, winning it all began with losing it all.

“We’ve been through this a number of times,” Linn said. “You have good seasons and it just seems like the stars have to line up to to get that last win.

“To lose in the finals last year was tough. Our kids had determined in the locker room after that that we were going to make a run again (this) year, knowing we weren’t going to lose anybody.”

And Smith Center hardly did, especially once the team got rolling.

The Lady Red didn’t drop a single set after their second loss of the season to Beloit on Oct. 2.

From that date on, the Lady Red rattled off 17 consecutive match wins en route to the banner season.

Behind its two-headed monster — senior duo Tallon Rentschler and Ashlyn Long, who together compiled 861 kills this year — the Lady Red exuded confidence and powered through the latter half the season.

Smith Center had to beat Hillsboro twice in less than 24 hours to secure the title. The teams played in the Friday nightcap of pool play and then in the championship Saturday afternoon.

Linn said he secretly hoped to face Garden Plain, the eventual third-place finisher, in the finals.

“My assistants said ‘why would you want that when we have (Hillsboro’s) number?’ We beat them twice in the state tournament last year, so we kind of had them a little bit mentally,” Linn said. “When they came out at the finals, to me there was a little bit of a back-of-their-mind thinking, like ‘how can we finally get these guys?’

“As it turned out, the first set was very close. It could’ve gone either way; they battled. We were up four or five late in the first set and they tied it 23-all.”

Taking the first set proved to reinforce that mental wall inside Hillsboro. The Lady Red won the second 25-12 for the gold.

Rentschler, who is a two-time first team All-Tribland selection, was the Kansas 2A player of the year this season. She heads to Fort Hays State next fall.

Long, who signed with Hutchinson Community College, was second team All-Tribland in 2021 as well as 2A all-tournament team and first team all-state.

“What those two brought to the table for us, you can’t overlook it,” Linn said. “For me, they both played middle mainly, and the next level they’re probably going to play outside.

“Tallon is just all power, forcing the ball through blocks, not a lot of finesse. Ashlyn is kind of the opposite; she’s just a different kind of hitter where she can smash the ball but works around the block. Both of them are going to be really good college players.”

Linn said the seniors deserved the storybook ending, but his first thoughts were directed towards all of the talented classes before who came so close, so many times.

“I thought about all the players who were one match short or part of a match short or one set short,” Linn said. “That win was for all of them as well as our team this year.”

The championship is also good timing in terms of Linn’s retirement. The coach’s day is approaching — not yet, but soon.

“Probably one of these years,” he said with a laugh.