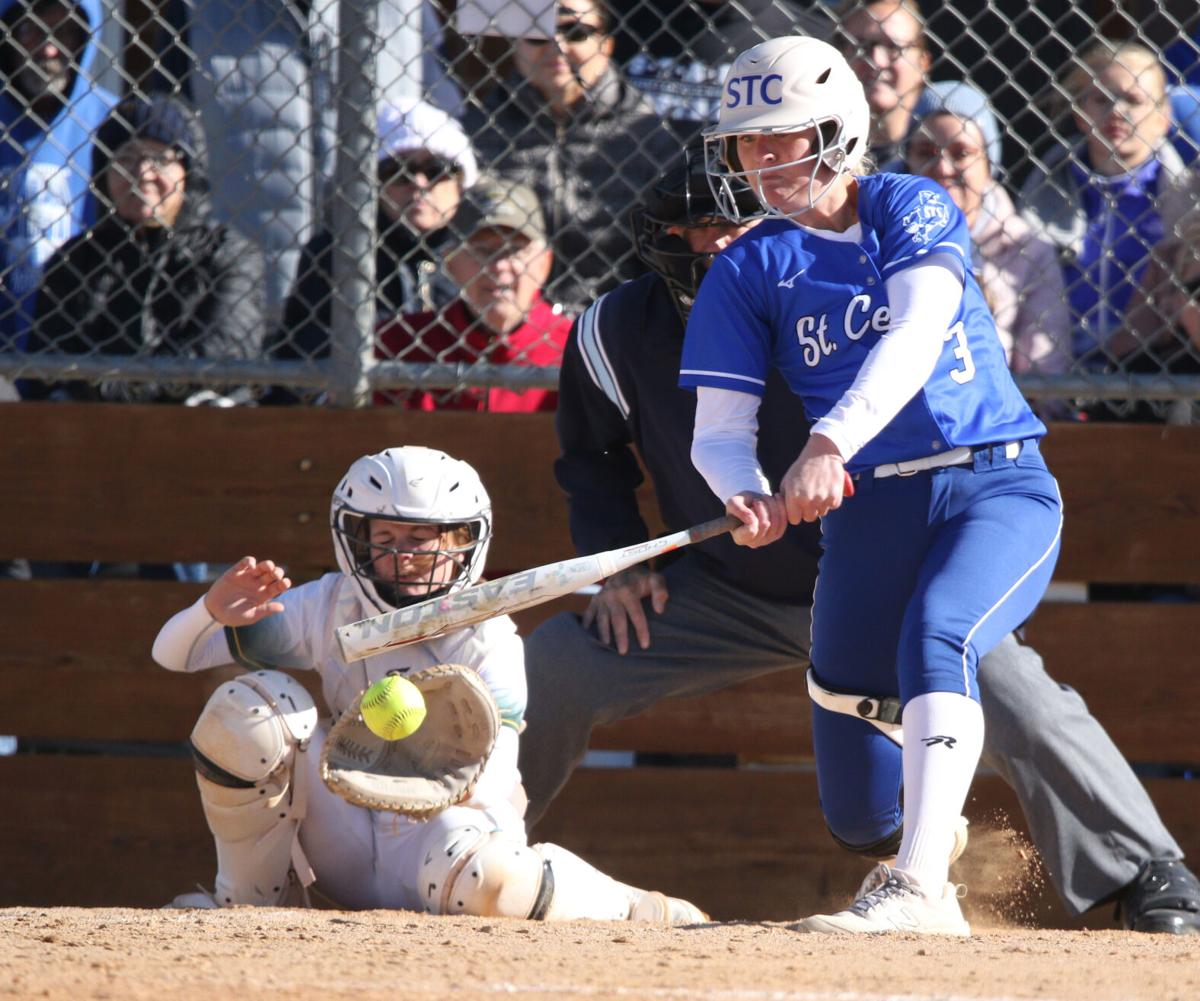 St. Cecilia’s Tayelor Butler bats during their first round game of the Class C state tournament Wednesday at Smith Complex. 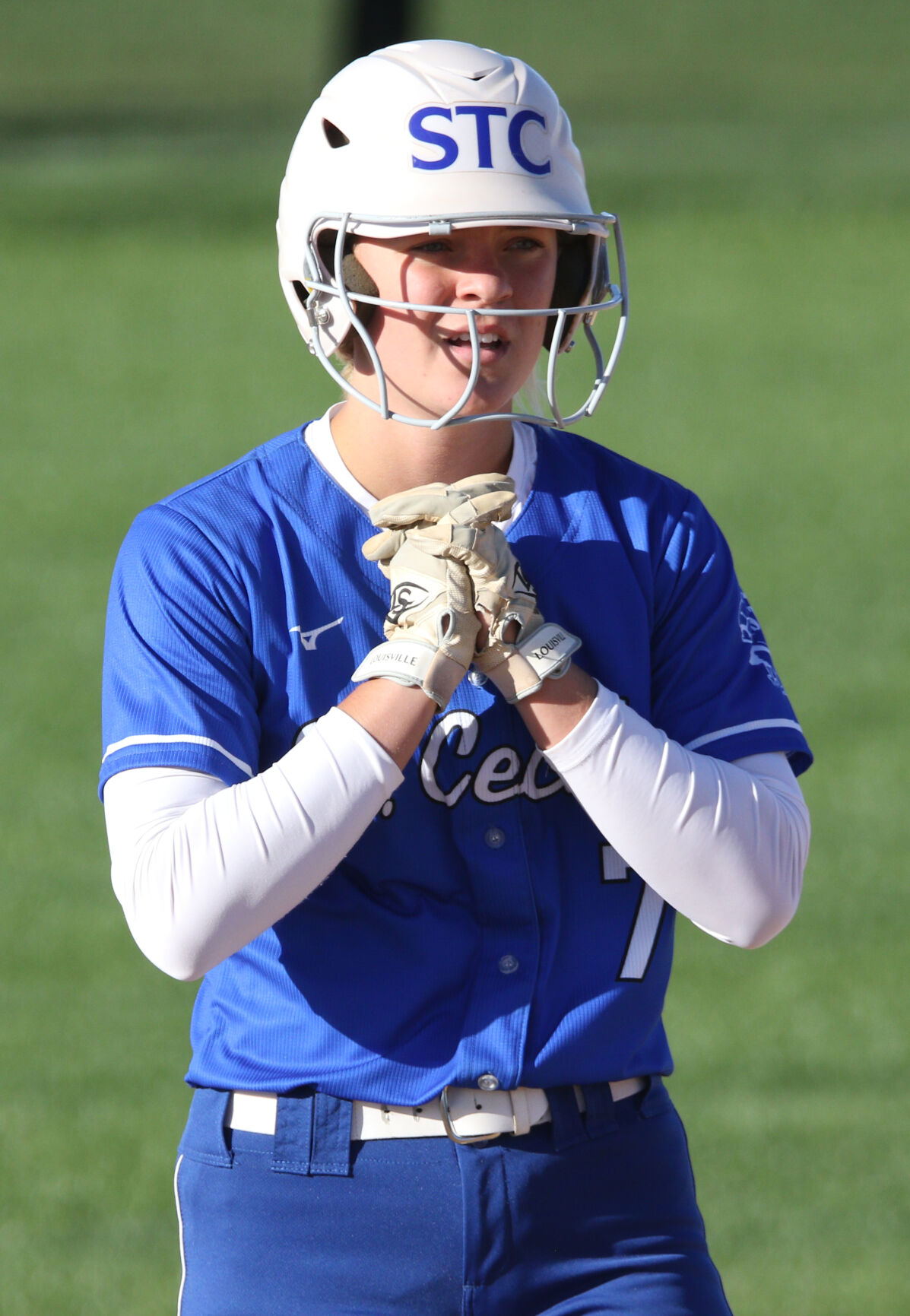 St. Cecilia’s Shaye Butler reacts to reaching second base in the last inning whille trailing Kearney Catholic in the first round game of the Class C state tournament Wednesday at Smith Complex. The Hawkettes couldn’t rally to win the game but are not yet eliminated from the tournament. 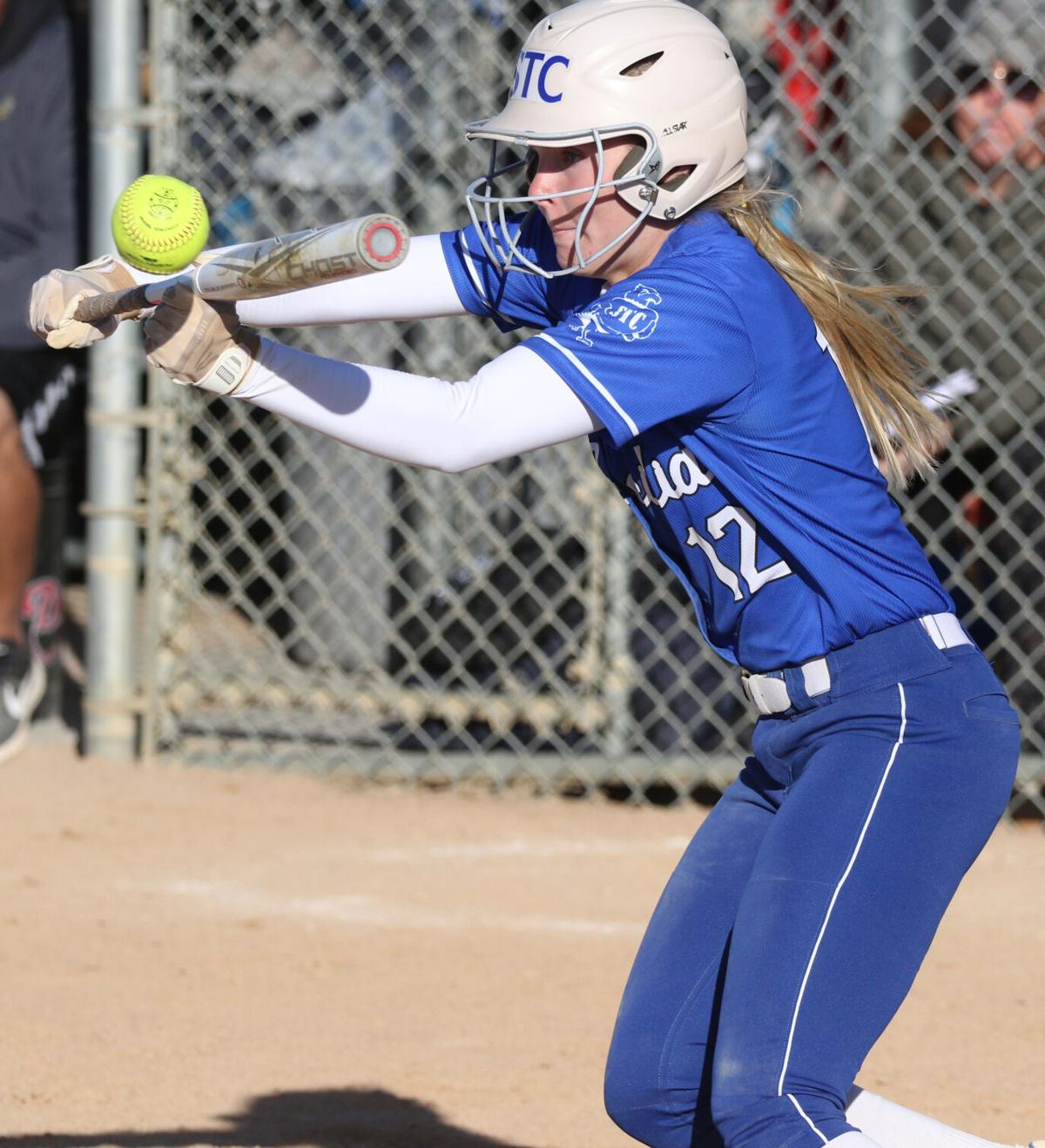 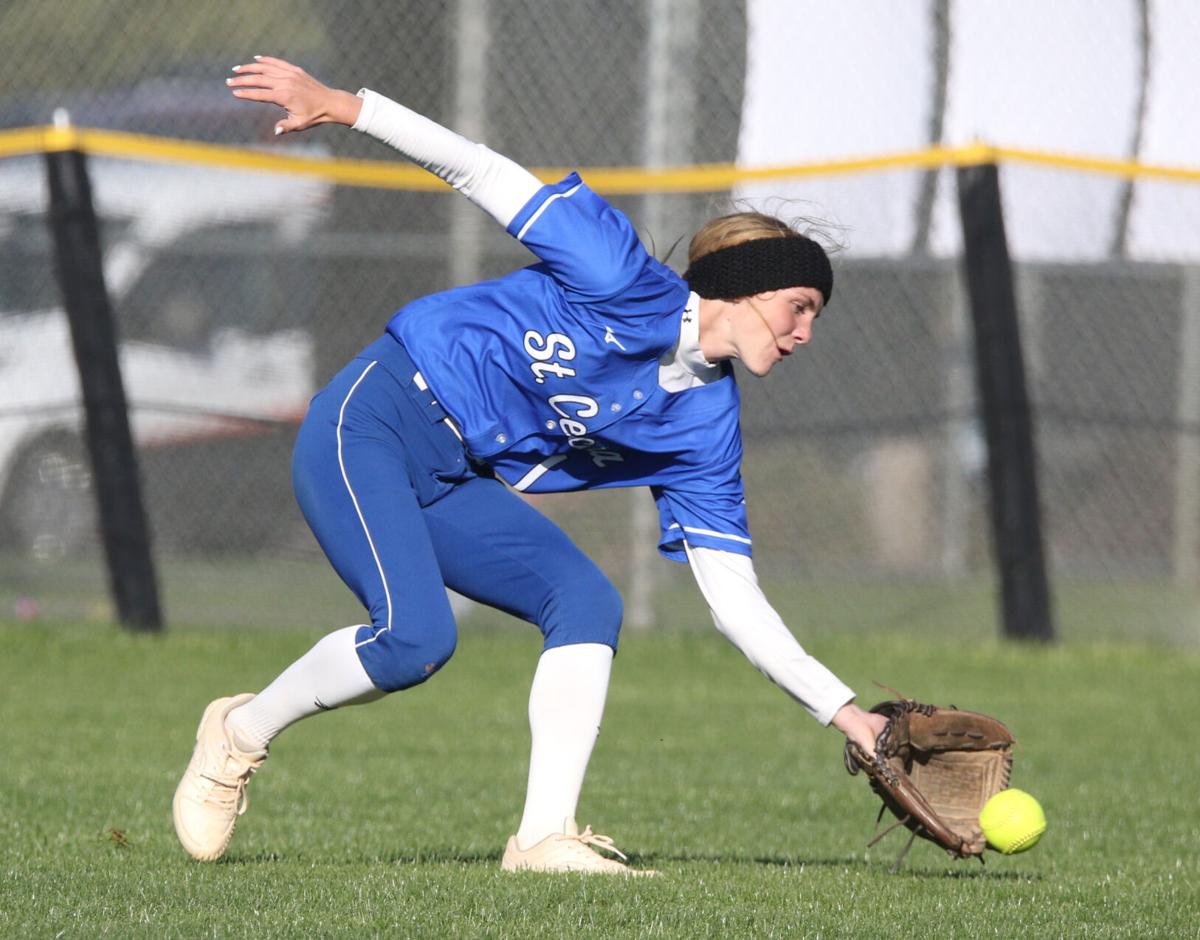 St. Cecilia right fielder Allison Stritt fields a hit to the outfield during their first round game of the Class C state tournament Wednesday at Smith Complex. 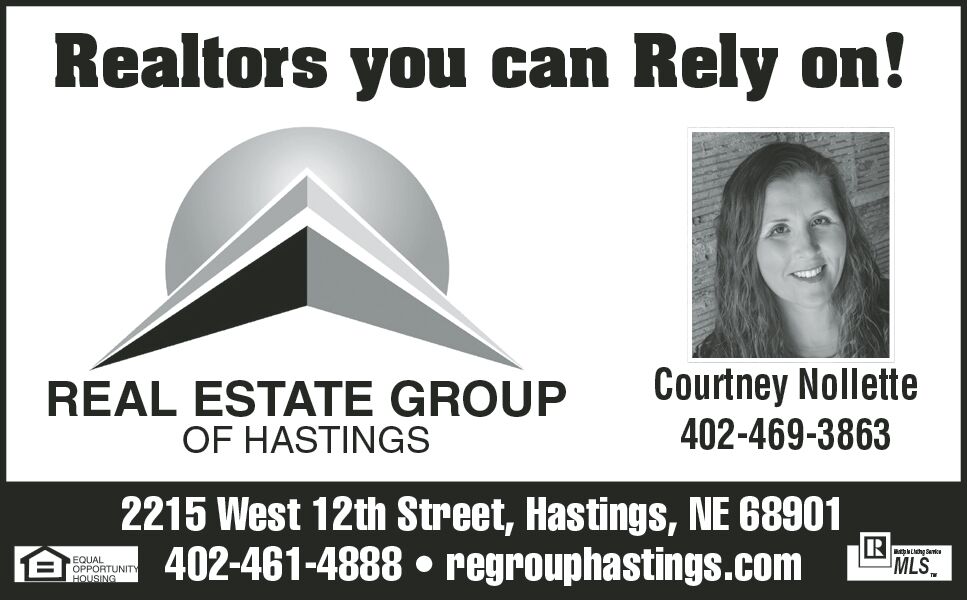 The mighty winds that ripped through the Smith Softball Complex brought an eerie, unsettling feeling with them, as St. Cecilia geared up to face Kearney Catholic in the first round of the Class C state tournament. The scene, the weather, the implications all just seemed to add up to heartache.

After the final out of the seventh inning, STC was left still searching for its first state tourney win, losing its first-round battle to the Stars, a team the Hawkettes had beaten all three times they played during the regular season. The gusts of wind, which reached up to 40 miles per hour, almost inexplicably pulled the ball just out of reach of the STC defenders while also tampering the effectiveness of the powerful St. Cecilia offense.

The Stars came out with the first punch in the opening frame, and KC pitcher Bralen Biddlecome was more than impressive, holding the record-setting Hawkettes to just four runs. Kearney Catholic, seeded seventh, bounced No. 2 St. Ceciilia to the consolation bracket with a 6-4 win.

“Emotions run high in the state tournament, but I feel like we lost the game right away in the first inning by giving up four runs,” said STC head coach Ryan Ohnoutka. “We had chances to get out of the inning, but that’s just softball. Sometimes the ball bounce your way and sometimes it doesn’t, and sometimes the wind blows 40 miles an hour and takes the ball somewhere else.

“Also, Biddlecome was on; her ball was moving. She just turns it on in the state tournament. She was a lot different than what we faced the last couple of times.”

Wednesday’s game was only the sixth time in 36 contests that St. Cecilia was held to fewer than five runs. The loss drops the team to 1-5 in such games.

Biddlecome allowed 10 hits during her seven innings of work, but she stranded eight Hawkettes on the base paths.

The powerful winds played a factor in the game immediately, wreaking havoc in the first half inning. Kearney Catholic’s Alexis Keim hit a fly ball that started over the second base bag but was pushed across the diamond near first base. The ball fell just out of reach of being an out. A two-out error then opened the door for an RBI single, which was followed with a three-run home run by Lauren Marker.

The blast put the Stars up 4-0 before the Hawkettes had even taken a swing.

“It’s a tough hitting lineup in Kearney Catholic when you play them four times,” Ohnoutka said. “They just found the holes with some of their hits.”

The Stars had a golden opportunity to really put St. Cecilia in a hole. Kearney Catholic loaded the bases in the third inning, leading 5-1, but a blunder on the base paths left the scoring chance squandered.

Kami Kaskie lifted a high fly ball above the infield, inducing the infield fly rule. The wind blew the ball back towards the batter’s box, just out of the reach of third baseman Tatum Krikac. The Stars’ runner at third saw the ball fall and broke for home, but the heads up STC defense threw her out to end the threat.

The game was on the verge of becoming strictly one-sided, but the Hawkettes stayed persistent. Trailing 5-1 in the fourth, St. Cecilia finally got the big hit it needed, when Bailey Kissinger drove delivered with a two-out, two-run base knock. Olivia Kvols followed suit and drove in Kissinger in the next at bat.

“Our girls have a lot of pride, so I knew we were going to (come back),” Ohnoutka said. “With the wind, we tried to focus on hitting line drives and ground balls.”

Kearney Catholic got one of those runs back in the fifth, but a nice defensive play from Tatum Krikac helped STC avoid any more damage. With one out and runners on first and second, Krikac turned a slick double play, stepping on her back for the force and firing to first to end the inning.

STC’s third baseman came back with a similar play in the seventh, when the Stars again had runners at first and second. After KC’s Carleigh Eurek showed bunt, she then pulled back the bat and swung away. The ball went right at Krikac, who had broke in to field the alleged bunt, but she then raced back to her bag and again threw a frozen rope to first for the double play.

“I think Tatum Krikac made about six plays at third base. She had a lot of putouts and she had a great day at third,” the STC coach said.

The double play helped St. Cecilia keep the deficit at one run, and the team carried that momentum into the final half inning. Shaye Butler and Kiersten Kober knocked back-to-back one out singles into the outfield, putting the tying run on base. But, with two outs, Tayelor Butler’s shallow fly ball to right was snagged by a diving Kaskie, ending the Hawkettes’ rally.

St. Cecilia will have one more chance to record the program’s first state tournament victory Thursday at 11:30 a.m., when it takes on sixth-seeded Freeman. The Hawkettes’ lone victory on the season when scoring under five runs came in a 4-3 win over Freeman.

Ohnoutka is confident his team will bounce back and bring an energetic attitude along with more firepower from the offense.

Only two of the Class C bracket’s higher seeds won on Wednesday. Top-seeded Bishop Neumann took care of Cozad 9-1 in five innings, getting three RBIs from Mary Chvatal and two more from Macy Sabatka, who also threw all five innings for the Cavaliers. Third-seeded Guardian Angels Central Catholic won a slugfest against Freeman, scoring 19 runs on 16 hits in a 19-11, five-inning win. Aubrey Kreikemeier hit a grand slam and had five RBIs.

The two winner’s bracket semifinal games were much more defensively oriented. Bishop Neumann edged out Malcolm by a score of 5-4, and GACC moved within one win of a finals berth after beating Kearney Catholic 4-2.

GACC scored three runs in the top of the sixth to take a 4-2 lead over the Stars, thanks to four consecutive errors by KC. Kayla Fisher powered the Bluejays with a complete game in the circle, striking out five. Sabatka again threw a complete game for the Cavaliers, while Avery Mayberry hit a homer and a double and drove in three runs. Chvatal also had three RBIs.